A waitress wearing a mask and gloves disinfects a table in a restaurant during the coronavirus pandemic.
Photographer: JOHANNES EISELE/AFP via Getty Images

Workers’ compensation systems that process injury and illness claims seeking cash and medical benefits generally don’t have the bandwidth to handle surges of claims that insurers or employers contest—which may become the norm with Covid-19 claims, the scholars said.

“Insurers have a tremendous incentive to contest those claims,” said Thomas Eaton, a University of Georgia law professor who led the Georgia Governor’s Workers’ Compensation Review Commission. “When they wrote the premiums, this is not a risk they took into account. Contested claims will mean hearings, discovery, and expert witness testimony in numbers that I can’t remember anything else approaching.”

Business closures and stay-at-home orders to limit Covid-19 infections created an unprecedented wave of layoffs across the country, with more than 30 million workers filing for unemployment insurance over the past seven weeks. But the next test to the U.S. social insurance framework—the workers’ compensation system—won’t be as evenly distributed.

The volume of workers’ compensation claims in each state will likely be linked to the number of businesses that reopen and regional infection rates as the pandemic continues to rage on, law professors said. That could mean spikes in states like Florida, Georgia, and Indiana where economic activity is resuming, while other states that remain on lockdown won’t see mushrooming claims.

In anticipation of continued infections, nine states have enacted measures lowering the barriers for certain workers who contract Covid-19 to qualify for workers’ compensation.

Every state aside from Texas requires employers to pay compensation to workers hurt or sickened on the job. The systems that states use stem from the “grand bargain” that made workers’ compensation the exclusive route for workers to seek payment for occupational injuries and illnesses. It gives workers benefits regardless of fault and employers receive protection from lawsuits unless they allegedly committed serious misconduct. Benefits are mainly funded through state or private insurers.

Workers’ compensation paid out $62 billion in benefits and cost employers $97.4 billion during 2017, according to a National Academy of Social Insurance report.

While each state runs its own system with its own rules, the key determination in workers’ compensation claims generally is whether the injury or illness was related to the job. But states tend to be more restrictive and demanding when it comes to proving a disease was contracted due to work, law professors said.

Several states, for example, don’t provide benefits for “ordinary disease of life” that the general population is exposed to, they said. States with that restriction include Michigan, Virginia, Georgia, Missouri, Kansas, Oklahoma, and Nebraska.

Some states have recognized the infection risk that certain workers face and lowered the bar for them to get workers’ compensation benefits. This is consistent with what states have previously done for selected diseases and worker groups. For instance, some states have made it easier for firefighters to get benefits for certain lung conditions.

California declared May 6 that all essential workers ill with Covid-19 are presumed to have gotten infected on the job, making it the eighth state to grant certain workers that advantage, according to the National Conference of State Legislatures’ data. The presumption means the employer or insurer must prove that a sick worker didn’t get the disease through their job.

Other states extended that occupational presumption for first responders and health-care workers, among other job categories. Arkansas took a different route by waiving some of its requirements for health-care and frontline workers to obtain workers’ compensation benefits. 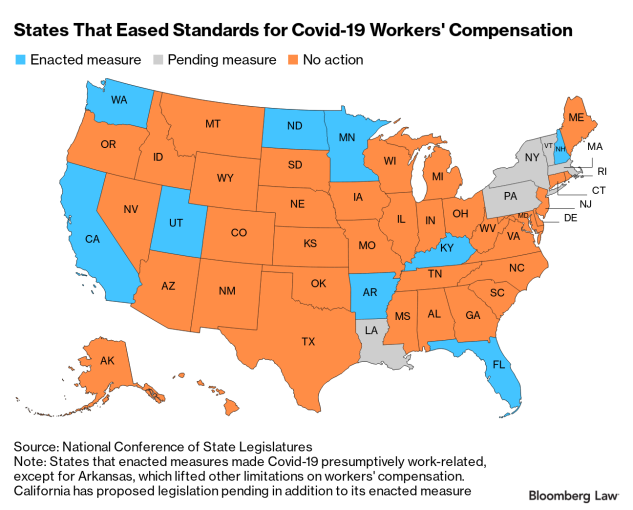 But executive action has been vulnerable to legal challenge, with Illinois withdrawing its measure a few weeks after the state’s Workers’ Compensation Commission issued it in April. A state court had blocked the measure with a preliminary injunction after a coalition of business groups sued, alleging the commission exceeded its authority.

Even workers who’ve been granted the presumption for Covid-19 will likely face opposition to claims that their disease is job-related, outside of those occupations where infections are rampant, said Emily Spieler, a law professor at Northeastern University who’s on the board of governors of the College of Workers’ Compensation Lawyers.

For those workers without the presumption, the stringent requirements for proving diseases are occupational will make it difficult—but not impossible—to obtain benefits, law professors said.

“The key to coverage is establishing a causal connection between the harm and a work-related cause,” University of Virginia professor J.H. Verkerke said. “Employers may be able to muddy the waters by pointing to other potential sources of infection or nonwork activities that create a risk of exposure.”

Workers generally have to clear two “causation” bars, one medical and the other legal, said Michael Duff, a University of Wyoming law professor who’s written extensively about workers’ compensation.

To show medical causation, a worker needs a doctor to say that the illness was more likely than not caused by work, Duff said.

For legal causation, some states require workers to show their presence in the workplace increased their risk over the background risk faced by the general public, he said. Other states call on workers to show that they wouldn’t have been infected without being on the job.

Workers might even prevail in states that prohibit benefits for “ordinary diseases of life” if courts haven’t defined what that statutory phrase means, Duff said.

“Workers’ compensation has been around for a century, but not many of these issues have been litigated,” he said.

Business groups have been seeking legislative shields against coronavirus liability, yet whatever comes of those efforts probably won’t impact workers’ compensation.

It’s doubtful that measures at the federal level would include amending workers’ compensation laws, an area very traditionally left to the states, said Randy Johnson, a corporate lawyer for Seyfarth Shaw. Federal legislation would more likely focus on the consequences of customers or other third parties getting infected, not workers, he said.

Indeed, anything that would have a chance of passage on Capitol Hill would have to still allow a lawsuit against a business that shows gross negligence, said Johnson, a former lobbyist at the U.S. Chamber of Commerce.

North Carolina recently passed a bill providing limited immunity to some companies from lawsuits related to an employee or customer contracting Covid-19, while explicitly saying that workers’ compensation isn’t affected.