Major League Baseball’s Opening Day has arrived, along with new disclosures that show the baseball players’ union spent the most money on two law firms last year amid an abbreviated season, Winston & Strawn and Zuckerman Spaeder.

The Major League Baseball Players Association paid nearly $2 million to more than a dozen lawyers and law firms in 2020 for their labor and legal expertise, according to its most recent financial statement filed Wednesday with the Labor Department. Winston & Strawn and Zuckerman Spaeder received about one-third of that sum.

The firms were drafted in a difficult year for the sport. Covid-19 forced the minor league season to be canceled and led MLB to start play more than three months later than usual, with few or no fans allowed to attend games.

Anthony Clark, a former player who serves as executive director of the MLBPA, said in an interview with The Washington Post last week that he expects the union to begin talks this month with management on a new collective bargaining agreement. 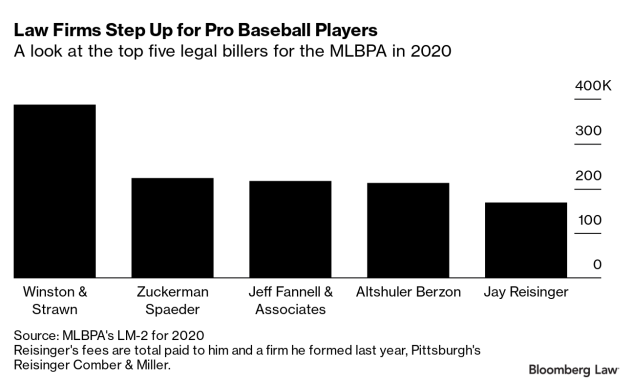 Winston, whose co-executive chairman Jeffrey Kessler is a frequent advocate for athlete interests, was paid more than $386,100 by the MLBPA last year. The union also paid about $120,400 to Sidley. The sums are an increase over what both firms took home from the MLBPA in 2019, disclosures that were delayed until last summer after the Labor Department extended filing deadlines due to the pandemic.

The MLBPA also paid over $18,500 to Kurzban’s firm, while Bredhoff & Kaiser received $54,300 last year for its services. Altshuler Berzon, which has long handled litigation work on behalf of the union and its players, was paid roughly $211,500.

A separate disclosure filed Feb. 16 by the Major League Baseball Umpires Association shows that it also paid $471,400 to Altshuler Berzon in 2020. MLB umpires took a 30% pay cut last year as a result of the truncated season.

Zuckerman Spaeder, which has its own sports agency arm that represents MLB players, is listed in the MLBPA’s filing as receiving $223,800 last year for salary arbitration work. Jay Reisinger, a Pittsburgh-based litigator who has represented some of baseball’s most prominent players, was paid $167,300.

Other firms on the union’s payroll last year include Jeff Fannell & Associates, a Bordentown, N.J.-based firm led by a former MLBPA in-house lawyer that was paid $216,500, as well as Boston-based Hemenway & Barnes ($88,600) and New York-based labor firm Cohen, Weiss and Simon ($74,200).

The MLBPA’s latest financial statement also details how much its in-house legal team earned in 2020.

Bruce Meyer, a former longtime labor litigation partner at Weil, Gotshal & Manges in New York hired by the MLBPA in 2018 to be its senior director for collective bargaining and legal, earned more than $1 million in total compensation. Meyer took the lead last year for the union in its negotiations with the league over Covid-19 protocols and pandemic player pay cuts.

The MLBPA and its National Football League counterpart reached a deal in late 2019 with private equity firm RedBird Capital Partners LLC to form OneTeam Partners LLC, a marketing and investment firm that now controls the licensing rights to players in both leagues. OneTeam, which last year hired former MLBPA lawyer Timothy Slavin as its chief legal officer, received over $31.3 million from the union in 2020.

Louis Melendez, an attorney and former vice president of baseball operations and senior adviser to MLB’s commissioner, was paid more than $136,500 to consult for the union last year on arbitration and international play issues.