Winston & Strawn Chair Tom Fitzgerald says he is committed to expanding the firm’s footprint beyond its Chicago home and outside of the courtroom despite Covid-19 and a highly competitive legal market.

About 20% of Winston’s lawyers are based in Chicago, down from about 65% when Fitzgerald took over as chair in 2006. Its corporate practice is now slightly larger than its litigation group for the first time in the firm’s 168-year history, thanks largely to growth in private equity, financial services, and M&A, he told Bloomberg Law.

“It’s simply that we thought that diversity in life and in every aspect of our firm—people, practices, sectors, and offices—was important,” he said.

Winston faces fierce rivalries for clients in many of these key regions, as well as on its home turf, as other wealthy firms like Cooley and Willkie Farr & Gallagher enter Chicago. It’s also coming off of a pandemic-dominated year in which the firm’s revenue ticked down as courts closed and litigation work slowed.

That’s not stopping Fitzgerald from thinking big about the firm’s growth plans. He has his eye on California, where Fitzgerald says Winston is “too small,” focusing on a Silicon Valley market that has been a tough nut to crack for many out of town firms as well as pursuing growth opportunities as they arise in other markets.

“If you make small plans and you succeed, who cares, right? That doesn’t move anything. You have to set up goals that push you and make you focus on areas of firm development.”

While the firm’s Chicago presence has reduced as a share of its overall headcount during Fitzgerald’s tenure, he called the new entrants into the Windy City a “good thing.”

Several years ago, the firm recognized “that Chicago could not be the be all and end all for Winston,” Fitzgerald said. The firm would have to grow outside of its hometown to attract the necessary talent.

Winston moved into North Carolina in 2008, opening an office in Charlotte with 18 lawyers. In 2011, Winston launched a Houston office after picking up more than 40 lawyers from the now-defunct Howrey and then, in 2017, moved into Dallas. In between those openings, in 2013, Winston expanded out West to Silicon Valley.

The firm under Fitzgerald also added top lateral hires in existing offices, like New York and Washington. In 2012, the firm picked up a 60-lawyer team from the then-floundering Dewey & LeBoeuf, including star litigator Jeffrey Kessler, who now serves as co-executive chairman.

A key piece to Winston’s expansion plan also centered around building out its corporate practice, particularly in private equity, finance and mergers and acquisitions, and capital markets. This has allowed the firm to balance out a historically heavy litigation-focus.

“In fact, I would not be surprised if for the remainder of this year corporate continues to grow at a little bit of a faster rate than litigation,” he said.

In Chicago, its core of homegrown talent have developed a private equity practice that is bordering on $100 million in gross receipts, he said.

“The area that we still have to conquer is Northern California,” Fitzgerald said, given the area’s private equity lean towards IPO work and public exits.

Fitzgerald acknowledged that native California firms and those designed to predominantly serve the tech sector may be more attractive in the region, but he’s still bullish about Winston’s chances.

“Our goal has always been not just to have one sector but have three or four that are material where we have the depth and breadth so that we can compete across more than a single sector,” Fitzgerald said.

Winston’s expansion out West comes at a time when other major firms are eagerly opening new offices across the country.

“I think that firms that traditionally have not been as aggressive at expanding their geographic footprint have changed that decision recently,” Fitzgerald said. 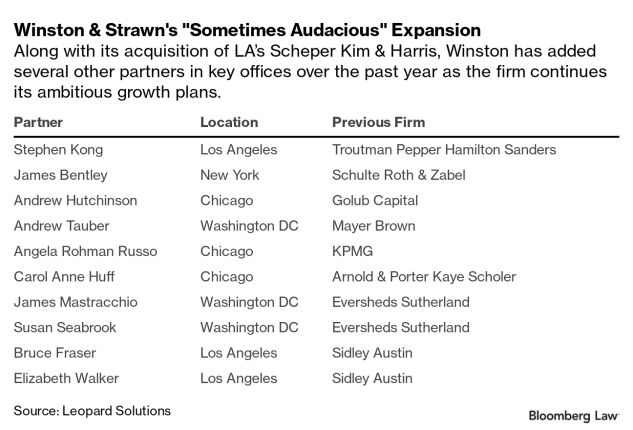 Winston is executing its expansion plans against the backdrop of the pandemic, which last year forced the Chicago-founded firm to cut partner draws and carry out layoffs.

The reductions in staff were in part a shift to move much of its administrative services to a Winston Resource Center, a group providing lawyer and client support for a lower price point, according to Fitzgerald.

Last year, the firm brought in $981.2 million in gross revenue, a 3% decline from 2019, due in part to court closures across the country that halted trials, according to recently released figures by the American Lawyer.

Winston is keen to keep growing. It picked up 15 lawyers from boutique commercial litigation firm Scheper Kim & Harris and three partners from Sidley Austin in February to build out its Los Angeles office.

One high-profile lawyer who will not be joining the firm is former Attorney General Bill Barr. The Trump Justice Department’s top official was reportedly spotted having lunch with Winston partner Dan Webb in the firm’s Chicago office in November, sparking speculation about his next career stop.

“We are not interviewing and we’re not in discussions,” Fitzgerald said, when asked about Barr. “I think that his record speaks for itself and so I’ll leave it at that.”

The firm managed to grow its profitability last year with profits per equity partner ticking up 4.6% to $2.42 million, according to Am Law data. Fitzgerald said balancing profits and expansion will continue to be essential.

“You can get revenue that’s not profitable, but that doesn’t help us,” Fitzgerald said. “So, therefore our ambitions, which are sometimes audacious, have to be tempered with the goal of profitability and it’s the mixing of those two that create great law firms.”

(Updated to include additional information on the firm's Chicago strategy.)