Groups leading the effort to outlaw “fair share” union fees aren’t taking any chances. They vow to press on with court battles even as the U.S. Supreme Court mulls a case that could settle the question of whether it’s legal to require public-sector workers who don’t want to join a union to pay for collective bargaining.

The National Right to Work Legal Defense Foundation and the Freedom Foundation have seven lawsuits pending that allege nonunion public employees shouldn’t have to pay what are also called agency fees. One case goes back to 2015, but another was filed in mid-April, well after oral arguments in the Supreme Court case, Janus v. AFSCME.

Union coffers are expected to take a hit if the court sides with the fair-share opponents in Janus by declaring the fees unconstitutional. Membership would also erode, and that would hurt union strength across the country, observers say.

National Right to Work and other organizations “have these cases lined up and will keep going until they overturn” agency fees, said Brian Aldes, secretary treasurer of Teamsters Local 320 in Minnesota. Local 320 is a defendant in one of the pending lawsuits.

NRTW spokesman Patrick Semmens says the cases could provide a kind of insurance for the group once Janus is decided. All of the cases have been put on hold until the Supreme Court releases its decision.

Some of the cases seek compensatory damages that wouldn’t be addressed by the Supreme Court’s ruling, so litigation will continue, those involved said.

“Point being, we’re still in active litigation and the Supreme Court’s decision, whatever it is, will not resolve all the issues in play,” said Maxford Nelsen, director of labor policy at the Freedom Foundation. The foundation has two cases pending in federal court in Washington. 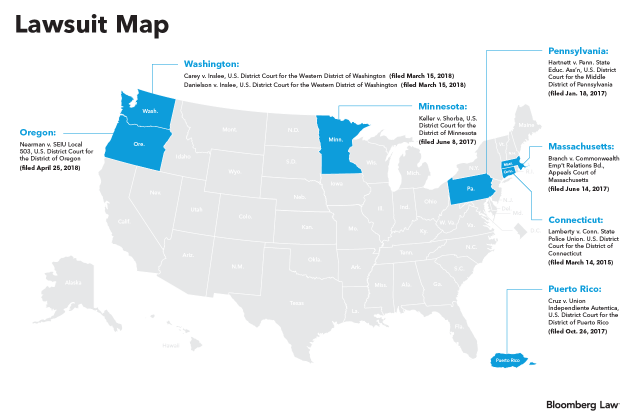 Mark Janus, the subject of the Supreme Court case, works as a child support specialist for the Illinois Department of Healthcare and Family Services. The American Federation of State, County and Municipal Employees represents some workers there. Janus disagrees with some of the union’s bargaining positions, and he alleges it violates his free-speech rights to have to pay the fees.

Agency fees are meant to cover costs associated with collective bargaining and can’t be used for political activities like lobbying under current Supreme Court precedent.

If the court rules in favor of the union in Janus, the Freedom Foundation complaints “will likely be amended to incorporate issues that fall short of a direct challenge to agency fees,” Nelsen said. The amended complaints could address the way agency fees are collected or the procedural safeguards to make sure the fees aren’t used inappropriately—or both, he said.

Court Could Come Down in Middle

If Janus wins, “then we still have to determine how the decision will be applied to our plaintiffs,” Nelsen said of the cases pending in Washington.

Another possibility is that the Supreme Court “comes down somewhere in the middle,” Nelsen said. “There will undoubtedly be many legal issues to sort through as we determine what the ruling means for the plaintiffs we represent,” he said.

The pending cases all seek a refund of fees and an injunction that forbids the unions to collect fees from nonmembers without their consent.

No End in Sight?

Alaine S. Williams, an attorney representing the Teamsters in Minnesota, has been fighting NRTW since 1988 and expects to continue doing so.

The foundation “will keep filing these lawsuits until well after they’re dead and buried,” Williams said. “They are not going to go away quietly into that good night.”

Labor professors have told Bloomberg Law that a decision to ban fair-share fees could lead to a push to ban fees in the private sector.

The Supreme Court typically releases decisions by the end of its term, in late June or early July.