National Labor Relations Board Member Gwynne Wilcox’s long career as a pro-union attorney could bedevil an effort by a Democratic NLRB majority to reconsider a high-profile worker-classification case involving .

Wilcox, who worked for the pro-union firm Levy Ratner until her confirmation late last month, represented the activist group Fight for $15 in a lawsuit over whether McDonald’s should be liable for labor law violations committed by franchisees and contractors. The group has asked the U.S. Court of Appeals for the D.C. Circuit to order the NLRB to reconsider its decision to let stand a $170,000 settlement from 2019 that was scorned by worker advocates for its nominal amount.

But under the White House’s ethics pledge for presidential appointees, it’s likely Wilcox would have to recuse herself, a scenario that could leave the board deadlocked with two Republicans and two Democrats. Wilcox’s potential conflict of interest marks the latest chapter in the NLRB’s painful self-examination of its ethics procedures and the revolving door between Big Law firms and the board—this time, with Democrats in the cross hairs.

Fight for $15 has argued that former NLRB Chairman John Ring and Republican member William Emanuel should have recused themselves from the McDonald’s case because their former law firms—Morgan Lewis and Littler Mendelson, respectively—had worked for the burger giant in the past. The group appealed the settlement to federal court after the Republican-led NLRB denied its request for reconsideration.

Much like Emanuel and the Republican majority experienced prior to the settlement, Wilcox’s ties to that case from her past could complicate a Democratic majority’s efforts to rewrite the joint employment doctrine —the legal standard for determining whether a group of workers has full union rights under the National Labor Relations Act—at the heart of the workers’ dispute.

Wilcox’s presence might also test the durability of a new NLRB ethics policy, written by the Republican board in response to Emanuel’s conflicts, that’s still being reviewed by the U.S. Department of Justice.

The White House ethics pledge prevents appointees from participating in matters involving a former employer or client for two years. Wilcox will be bound by it until just before her term ends in August 2023. (She holds a seat that had been vacant since 2018, meaning that three years of her five-year term have already passed.) 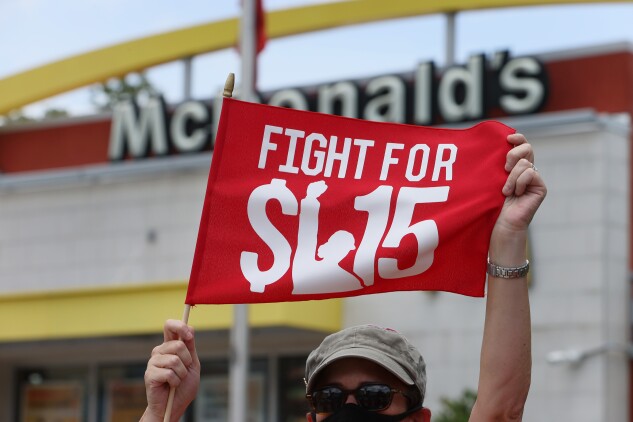 A protestor urges McDonald’s Corp. to increase workers’ pay to at least $15 an hour during a demonstration in Fort Lauderdale, Fla., in May.
Photographer: Joe Raedle/Getty Images

While presidential appointees sometimes obtain ethics waivers, the practice is less common for lawyers, said Virginia Canter, a White House attorney during the Obama administration who is now chief ethics counsel for the watchdog group Citizens for Responsibility and Ethics in Washington. That’s because attorneys have an ethical obligation not to go against their clients, even after they stop working for them.

“When you’re dealing with an attorney, because of the duty owed to the client, it would be unusual to waive that,” Canter said. “You have a professional duty of loyalty to your client that continues.”

Aside from the White House pledge, Wilcox must also comply with a new set of ethics procedures Ring put in place in 2019, when he was chairman. The policy—prompted by the controversy surrounding Emanuel’s involvement in another joint employer case—gives members authority to insist on participating in a case even when the NLRB’s internal ethics official determines they may have a conflict of interest.

In theory, that could allow Wilcox to sidestep an opinion of the agency ethics official once she’s free from the restrictions of the White House pledge. The same is true for David Prouty, a former SEIU attorney confirmed by the Senate to replace Emanuel when his term ends this month, which will give Democrats control of the board.

The new policy touched on a larger debate over ethical boundaries for board members. David Berry, the agency’s inspector general, wrote in 2018 of a “serious and flagrant” problem with the board’s ethics procedures, in that members can participate in decisions that indirectly help former clients, as long as the client isn’t a party in the case.

Some labor lawyers pushed back on Berry’s take, arguing that a broader policy would prevent presidents from picking qualified applicants.

At her confirmation hearing last month, Wilcox suggested she wouldn’t overrule ethics officials, saying that their input on her involvement would be “very important.” But she didn’t explicitly say she’d follow their advice in all circumstances.

“I take these obligations very seriously,” Wilcox said at the time. “So I will seek guidance in that matter.”

In October 2020, Ring said he would ask DOJ to review the ethics reforms in response to confusion over the role of the Office of Government Ethics in adjudicating disputes. But Ring didn’t transmit the request to DOJ’s Office of Legal Counsel until Jan. 19, 2021—his last day as chairman—according to NLRB spokeswoman Kayla Blado.

“The request remains pending, and the Agency has not received any communications from Justice regarding status or opinion,” Blado said in an email.

New NLRB members typically meet with the agency ethics official to develop a list of cases that involve former clients. These recusal lists were treated as proprietary information, but under Ring’s policy they must be posted on the agency’s website. 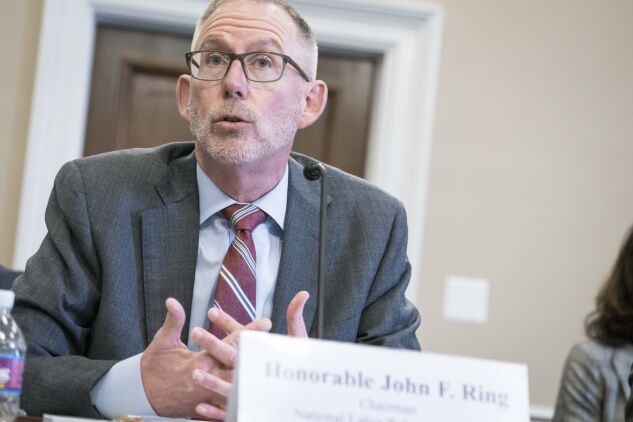 Neither Wilcox’s nor Prouty’s lists have been published yet. In response to a public records request from Bloomberg Law, an NLRB attorney said in an email that the lists “are not yet finalized” and would later be posted online.

In a court filing this month, McDonald’s called Fight for $15’s appeal a “gambit” that was “strategically sought only when they thought the Board might rule against them.”

The case will drag on well into the fall, with the court on Monday setting a deadline of Oct. 21 for final briefs.

In the meantime, the NLRB could begin working on a new joint employer rule that would fall outside of Wilcox’s ethical restrictions.

The board also could take up additional joint-employer cases and interpret the rule in a way that’s more favorable to unions, said Anne Lofaso, a former board attorney and professor at the West Virginia University College of Law.

“Just because Wilcox worked on McDonald’s doesn’t mean that she can’t work on rulemaking,” Lofaso said.