Flowers bloom near the U.S. Capitol in Washington, D.C., U.S. The White House and U.S. senators reached an agreement on a rescue package to address the coronavirus crisis.
Photographer: Al Drago/Bloomberg

The Senate moved toward a vote Wednesday on the biggest economic rescue measure in U.S. history, a more than $2 trillion package of spending and tax breaks to bolster the hobbled U.S. economy and fund a nationwide effort to contain the coronavirus.

The legislation was furiously drafted after Senate Majority Leader and Democratic leader announced early Wednesday morning that they struck an agreement after several days of marathon negotiations that also involved Treasury Secretary .

“The Senate is going to stand together, act together, and pass this historic relief package today,” McConnell said as the chamber opened for business. He said the timing of the vote would be set once he consults with Schumer, who said Democrats were ready to speed things along “as much as possible.” 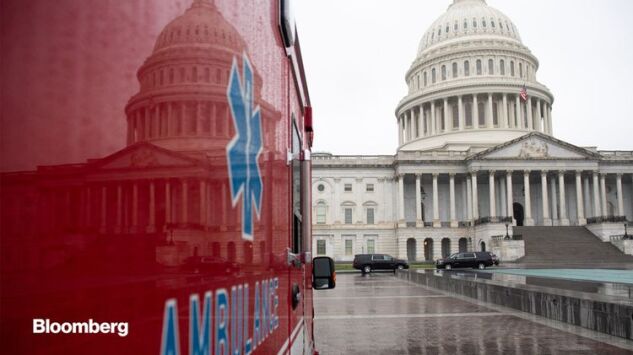 WATCH: ”In effect, this is a wartime level of investment into our nation,” McConnell said.
Source: Bloomberg

Even with the Senate open, text of the legislation still hadn’t been released, and there were few details on all the provisions.

It will include about $500 billion in loans and assistance for larger companies, as well as states and cities, according to the latest drafts being circulated.

That includes struggling U.S. airlines, which will be eligible to receive a combined $62 billion in federal loans and direct cash assistance to meet their payrolls, including $25 billion in direct aid to passenger carriers and $3 billion to airline contractors providing ground staff such as caterers, and $4 billion to cargo haulers.

Mnuchin would be empowered to require equity or other securities in return for the cash assistance, and other restrictions would apply, including a limitation on reducing payrolls and on executive pay, according to the draft text.

The deal also includes $17 billion in loans earmarked for companies deemed critical to national security, which is intended to assist Boeing Co. though the legislation doesn’t mention the company by name.

Democrats demanded and won a series of restraints on corporations that benefit from loans or investments from the Treasury Department, as well as an oversight mechanism for who gets money. 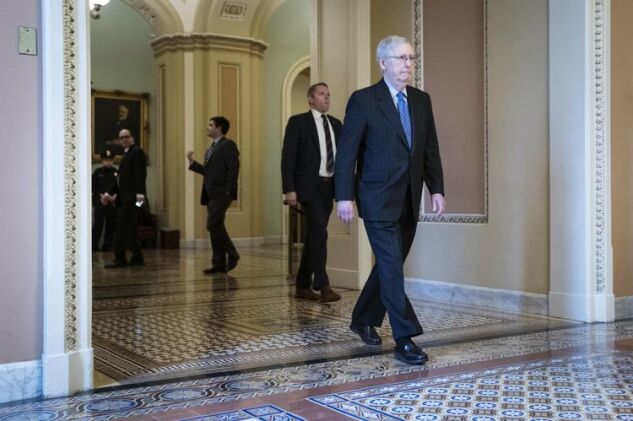 Any company receiving a government loan would be subject to a ban on stock buybacks through the term of the loan plus one additional year. They also would have to limit executive bonuses and take steps to protect workers. The Treasury Department would have to disclose the terms of loans or other aid to companies and a new Treasury inspector general would oversee the lending program.

Notably, Democrats won language that would bar aid to businesses in which Trump, Vice President , heads of executive departments of members of Congress hold 20% or more ownership. The exclusion also applies to businesses owned by members of their family, including sons-in-law and daughters-in-law.

There is a separate pot of more than $350 billion for small businesses. Much of that will be in loans through the Small Business Administration and banks, guaranteed by federal government. The loans used for payroll, mortgage and rent will be forgiven. An additional $17 billion would enable the SBA to step in and make six months of principle and interest payments for all loans it backed.

For individuals the package provides direct payments to lower- and middle-income Americans of $1,200 for each adult, as well as $500 for each child. Unemployment insurance would be expanded to provide extra $600 a week on top of state benefits, which currently vary in length and amount, eligibility would be expanded to cover more workers.

The bill provides a tax credit for companies that retain employees even if they’ve been mandated to close or seen a significant drop-off in business. Student loan borrowers who get assistance from their employers on paying those back don’t have to pay income tax on the aid.

GOP Senator told reporters the plan will provide $100 billion directly to hospitals and health care providers, $250 million in hospital grants, and large investment for vaccines and test kits. No one will be charged for coronavirus tests.

The package also contains $340 billion in emergency supplemental funding for the government’s battle to stem the outbreak, the bulk of it going to state and local governments, according to a summary from Senate Appropriations Chairman Richard Shelby.

There also is a separate $150 billion Coronavirus Relief Fund for state, local, and tribal governments.

While there is little doubt the legislation will pass, getting Congress to act quickly will require the consent of essentially every member of Congress.

Any one senator has the power to delay a swift vote. Republican Senators Tim Scott, Ben Sasse, and Lindsey Graham released a joint statement Thursday saying they would oppose fast-tracking the bill until a “massive drafting error” in the text is fixed. They said as written, a section of the legislation on unemployment insurance would create an incentive for unemployment. Some workers would make more in unemployment benefits than they do on the job with the added benefits in the bill.

The same hurdles to quick passage apply to the House, where lawmakers are currently on a recess. Pelosi and Republican leaders were trying to line up their members for approval by unanimous consent, which wouldn’t require them to return to Washington for a recorded vote. Several Democrats told Pelosi in a closed-door conference call on Tuesday that they are not comfortable with simply rubber stamping a Senate-passed bill.

House Majority Leader said lawmakers would get 24 hours’ notice before voting, meaning the soonest the House could act would be Thursday.

“We must have the final legislative text and clear direction on when the Senate will vote,” Hoyer said.

More: Mapping the Coronavirus Outbreak Across the World

The S&P 500 Index rose after fluctuating between gains and losses early in the the trading day, following Tuesday’s 9.4% surge in anticipation of the deal between the White House and Congress.

The size of the stimulus package is unprecedented, dwarfing the approximately $800 billion Obama stimulus that passed five months after the 2008 financial crash.

Together with Fed intervention, the proposed legislation amounted to a $6 trillion stimulus, according to White House economic adviser , or about 30% of annual GDP.

The package will likely more than double a U.S budget deficit that was already set to hit $1 trillion this year before the outbreak. It also may not be the last infusion of government spending in response to the spread of the virus.

Lawmakers universally expressed a sense of urgency as the nation’s economy deteriorates and the health outlook grows more dire. The World Health Organization said the U.S. has the potential to become the new epicenter of the global pandemic as the number of known infections soars.

The proposal is the third -- and biggest -- plan by Congress to confront the coronavirus crisis as the disease spreads.

An initial $8 billion plan passed by Congress March 5 is funding emergency health care needs stemming from the coronavirus, and a second plan enacted last week will provide many Americans with paid sick leave, food assistance and free coronavirus testing. It also will send tens of billions in fresh aid to states.

(Updates with additional details on legislation, break down of funding, potential delays beginning in sixth paragraph)