As Washington state prepares for tens of thousands of workers to claim paid family and medical leave benefits when they become available Jan. 1, other states are ramping up efforts to get their own programs for workers.

The state’s Employment Security Department, which is in charge of administering the family leave program, estimates there will be 75,200 claims to use family leave benefits to welcome a new child, take leave for a serious illness, or care for a family member in 2020, ramping up to 175,000 claims by 2024. The state began collecting premiums—funded through a payroll tax on employees and employers—at the start of this year. The department already has collected about $569 million in premiums for FY 2020, and projects it will pull in $804 million for FY 2021.

“We have been hitting our targets, and we plan to launch on time and on budget for this benefit,” said ESD Commissioner Suzan LeVine. “We’ve already been hearing from many folks who are anxiously awaiting this benefit.”

Workers in the Evergreen State have reached out with questions on whether paid leave can be granted for needs that range from having a baby, to addiction treatment, to caring for a spouse with cancer, LeVine said. “The more I hear from our care team and our trainers who are hearing these stories, and the more I speak with folks directly, the more profound an impact I believe it will have on our state.”

Eight states and the District of Columbia have passed legislation for paid family and medical leave, but only California, New York, New Jersey, and Rhode Island currently have running programs. D.C.'s benefits are scheduled to launch July 1, 2020, while Massachusetts, Connecticut, and Oregon will have benefits available in 2021, 2022, and 2023, respectively. 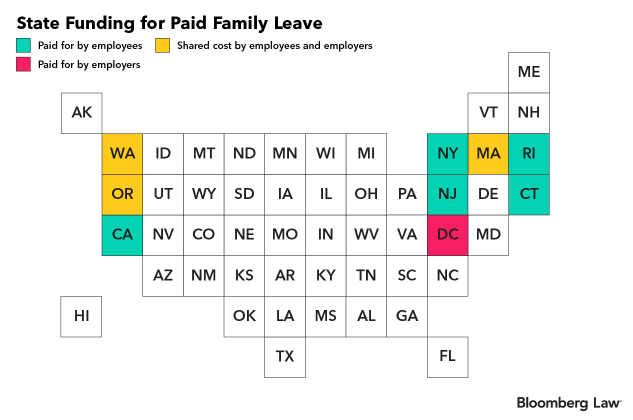 There also will be moves to “strengthen or expand the length of time one might be on family leave in states where it already exists,” said Tim Goodrich, executive director of state government relations at the National Federation of Independent Business.

States that are likely to continue attempts to establish paid leave programs include New Hampshire, Vermont, and Virginia.

A New Hampshire bill that would have created a social insurance program for paid family and medical leave was vetoed by Gov. (R) in May. Sununu had proposed an alternative plan with Vermont Gov. (R) to create a voluntary paid family and medical leave plan, but that proposal died in the Vermont Legislature, and therefore couldn’t be enacted this year.

Both governors have circled back to support voluntary plans in their respective states. Sununu announced his support for a bill in October that would create an opt-in family and medical leave insurance option for workers. Scott, meanwhile, has negotiated his version of the opt-in insurance plan into a bargaining agreement with the Vermont State Employees’ Association.

Virginia Democrats won big in this year’s election, numbers that should bolster efforts to pass paid family and medical leave in 2020. “We weren’t terribly optimistic about our odds in 2019, but we had great conversations on both sides of the aisle,” said Tara Gibson, state director of the Campaign for a Family Friendly Economy in Virginia. “Now we are reintroducing this bill for the 2020 session and feeling far more optimistic.”

Virginia Gov. (D) used his executive authority to grant paid family leave to state workers in July 2018, saying that order is only the first step to a broader paid family leave benefit for Virginia workers. Democratic lawmakers will back similar bills in 2020 to those introduced this year (H.B. 2120, S.B. 1639).

In Colorado and Hawaii, legislators are using research to weigh the potential cost and impact of paid family and medical leave, as directed by state leaders. Democratic lawmakers in Colorado already have indicated they plan to pursue legislation in 2020 after efforts stalled in the state Senate this year.

Florida, West Virginia, and Louisiana are among red states where campaigns for paid family leave could get some traction.

Republican lawmakers may be taking their cues from the Trump administration, which has renewed its call for Congress to find a bipartisan solution for federal paid family leave.

But federal pressure can go either way, Mason said. “On the one hand, having more momentum federally and an increasing number of more moderate and conservative members talking about the issue normalizes it and makes it safer” to support, she said. A clear path forward on national paid leave, however, could mean some states back off the issue.

Some business groups, for both large and small employers, are pushing for a national solution. But Goodrich said that any kind of mandate will create new obstacles and administrative burdens—especially for their members, who often have less than 10 employees. Those kinds of “really small” businesses aren’t likely to have human resources departments, and they take issues of leave on a case by case basis, he said.