The damage inflicted on the by the coronavirus is proving worse than initially estimated and will be impossible to repair in the second half of 2020 even under the most optimistic scenario, according to the International Labour Organization.

Working hours in the second quarter were 14% lower than before the virus, equivalent to a loss of 400 million full-time jobs, the Geneva-based organization said Tuesday. The sharp increase from a previous estimate of 305 million reflects a worsening situation over the past weeks, especially in developing regions, it said.

The data add to evidence that the from the virus is disproportionately being felt by the less well off, exacerbating existing social and wealth inequalities. While some jobs will return, weak demand may persist in many industries, and a full recovery is unlikely for some time. 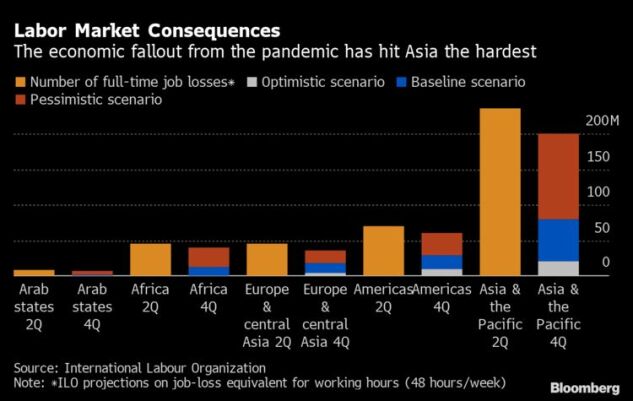 Policy makers should pay particular attention “to the most vulnerable, disadvantaged and who’ve been hardest hit by the pandemic,” said ILO Director-General . “Everybody has recognized that the inequalities, the precarity of many millions of peoples’ working lives have been made very very clear by the pandemic, and those deficits have left appalling human costs.”

South America suffered the most severe deterioration in the past three months, with the loss of working hours exceeding 20%, according to the ILO. In Asia and the Pacific, the reduction amounted to 13.5%, making it the region with the greatest hit in absolute numbers. 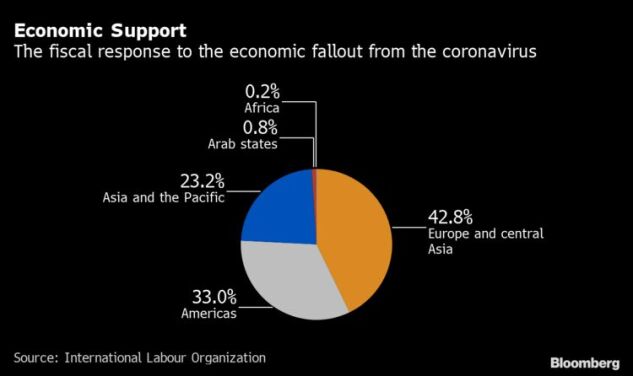 The increasing damage in these regions is in line with a of the pandemic that’s killed more than 500,000 worldwide. First it was China, then Europe, and now developing countries with weaker health-care systems like Brazil and India are reeling. The U.S. is also adding infections at a record pace.

Women have been hit harder than men by the crisis, threatening to undo some of the gains in gender equality made before the crisis, the ILO said. A large number of them work in sectors that were most affected, like accommodation, food services and retail. Women were also more often held back by for childcare during the crisis.

The labor market losses suffered so far won’t be repaired in the second half of the year, even under the ILO’s most optimistic assumptions. In its baseline scenario, working hours would still be 4.9% lower in the fourth quarter compared with a year earlier, equivalent to 140 million full-time jobs. 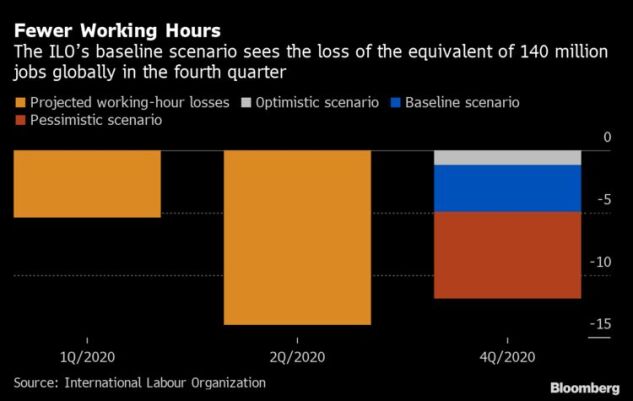 Much will depend on the response of policymakers, who are facing a even after deploying unprecedented stimulus to protect companies and workers. The ILO warned governments not to repeat the mistakes of the financial crisis and tighten belts too soon.

It said that disadvantaged groups like women, young people and informal workers required targeted support to keep existing injustices from being aggravated during the recovery. It also called for greater international solidarity to help out poorer countries through measures like .

To contact the reporter on this story:
in Brussels at aweber45@bloomberg.net

To contact the editors responsible for this story:
at fobrien@bloomberg.net