The House is now under pressure to quickly vote on a $2 trillion bill featuring massive expansions of state unemployment compensation programs. That would cover an emergency hike of $600 per week for each UI check over the next four months; a 13-week extension of benefits eligibility; a jobless aid program for self-employed workers and independent contractors who can’t find work due to the virus; financial incentives for states to waive their one-week waiting period to pay benefits; and the hiring of state staffers to process claims, among other provisions.

States also have been working to update their systems in accordance with recent Labor Department guidance giving states flexibility to expand eligibility to people unable to work due to the spread of coronavirus.

State policymakers, the Labor Department, and unemployment compensation advocates are preparing for a tumultuous new reality from the simultaneous influx of cash and overhaul of program parameters at unemployment insurance offices—which already are struggling with staffing and technology deficiencies. There’s a recognition that many laid-off workers will be waiting weeks after filing to receive their first wage replacement check.

“Folks are going to be hoping to receive benefits for what’s available under current law and now comes a policy that says we’re going to change all of that and provide a different amount of money,” said Matt Weidinger, a fellow at the conservative think tank American Enterprise Institute. “It’s hard for states to turn on a dime and do that sort of thing, especially when you have a huge surge of claims to the system at the same time.”

Recovery legislation passed to address the 2010 recession authorized DOL to work with states to pay a $25 supplement to each weekly UI check, the closest parallel in recent history to the $600 boost included in the virus rescue package. Some states couldn’t adapt their benefits processing systems to the 2010 change, forcing them to devise new systems outside of their typical software to issue separate $25 checks for every filer, said Dale Ziegler, who was then the deputy administrator of DOL’s office of unemployment insurance. Those states experienced weeks of delays, he said. 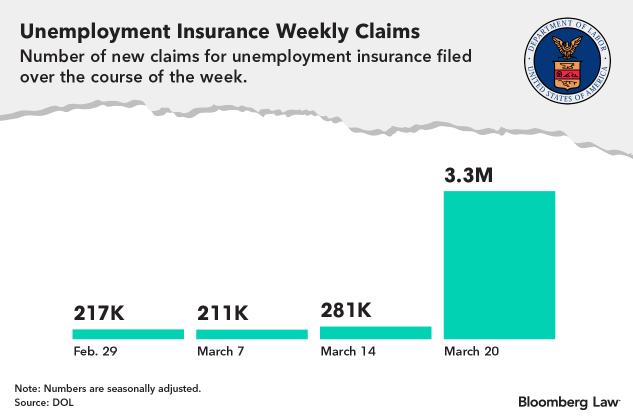 The $600 in extra weekly benefits included in the latest coronavirus rescue plan would be implemented by the state offices at the same time they’re dealing with other administrative obstacles from the new legislation. Although the Labor Department oversees unemployment insurance benefits systems by providing guidance on some minimal federal standards, states manage the processing and payment of claims and are given wide latitude to develop their own laws on eligibility terms and benefit levels.

“What really creates some challenges is now we’ve got people who are self-employed or gig workers,” said Ziegler, now the government relations director for a UI technology vendor. “In unemployment, it’s based on your earnings in four of the last five quarters; in this particular case they don’t have any information on what these people’s incomes were? So how do you get that?”

Labor Secretary joined Senate Republicans to argue against Democrats’ calls for larger UI increases in the stimulus bill, according to reports in the Washington Post and Politico.

The more robust unemployment aid in the updated legislation reflects a partial concession to Democratic demands. Scalia’s department is now cautioning that states will have to make major upgrades to their jobless benefits programs.

“As part of the Federal-State partnership that administers the Unemployment Insurance (UI) program, each state runs its own UI technology infrastructure, and those systems vary state-to-state due to differences in state UI law. Several state systems are over 40 years old,” said a DOL spokeswoman in a statement to Bloomberg Law. “It is important that policy makers understand the options and limitations of the current systems, as well as their ability to be modified or updated to deliver relief above and beyond traditional UI payments to American workers.”

Even the states taking steps to handle the historic rise in claim filings are preemptively asking the public to be patient.

The Ohio workforce agency, which reported nearly 140,000 claims last week, warned that the current crisis is unlike other downturns when claims arrived in more gradual waves.

“This amount of claims in this short expanse of time would tax any online system,” said Bret Crow, a spokesman for the Ohio Department of Job and Family Services. “We have been working around the clock to streamline performance and boost capacity by adding servers so the online claims system can handle the unprecedented influx of claims, which has affected processing times.”

The state governments have other problems, as well. They need to add more staff at a time when people are being advised to stay home and avoid crowds to stem the spread of Covid-19, the disease caused by the novel coronavirus.

“The states are working to handle this unprecedented onslaught of unemployment insurance claims while also trying to keep their own staff safe from COVID-19,” said Scott Sanders, executive director of the National Association of State Workforce Agencies. “Some states have started setting up staggered claims filing days to better serve our nation’s workforce and continue to tweak their technology systems to address the workload.”

But when state unemployment office employees are practicing social distancing by working from home, that can be a technological challenge for state workers to access the mainframe benefits system remotely, said Julia Simon-Mishel, the supervising attorney for Philadelphia Legal Assistance’s unemployment compensation unit.

“What technology and support for technology is going to be available to let states—especially if we’re looking at this long term—have employees who are remote to receive information from employers, process information, issue determinations, pay out benefits, and to answer questions and inquiries from workers?” said Simon-Mishel. “If I’m calling the statewide unemployment number, can they send that call to someone sitting in their home remotely?”

“States need assistance in order to do things like that,” Simon-Mishel said.