Workplace Covid-19 vaccination mandates have largely survived a first wave of legal challenges even as the number of lawsuits over them has soared with their expanded use.

Workers and advocacy groups have filed at least 39 federal cases this year, contesting vaccination requirements imposed by employers or governments, with 85% of them arriving after Aug. 1, according to a Bloomberg Law review. Courts have denied requests for temporary orders against mandates in 12 of the suits, while seven have ended with dismissals.

The only pro-challenger rulings involve exceptions to mandates rather than the validity of the mandates themselves. Two courts have temporarily blocked New York from enforcing its health care worker vaccination rule on those with religious objections to the shot. Another court issued a temporary restraining order against blanket policy of putting public-facing workers on unpaid leave if they have a religious or medical reason for not getting inoculated.

The initial results of mandate litigation provide employers with added confidence and support what many employment lawyers and legal scholars have been saying about the clear legality of workplace mandates since before Covid-19 vaccines became available.

Companies, which have a legal obligation to keep their workers safe, generally can require inoculation via their power to set and enforce the terms of employment, lawyers and scholars said. Still, employers must provide reasonable accommodations for those with health or religious reasons for not getting the jab. Those with unionized workers may also have an obligation to bargain over mandates.

The U.S. Supreme Court blessed the constitutionality of government vaccine mandates with its 1905 ruling in Jacobson v. Massachusetts. Justice Amy Coney Barrett in August rejected a bid to block an inoculation requirement for Indiana University students that could have let the court reassess its longstanding precedent on mandates. Justice Sonia Sotomayor similarly turned aside a petition seeking a stay of New York City’s vaccination mandate for school employees.

“Opponents of vaccine mandates took on a heavy lift and they discovered that they weren’t Atlas,” said Robert Field, a professor of law and public health at Drexel University. 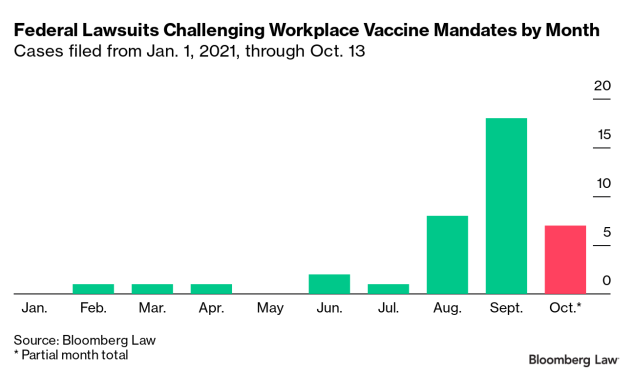 But the Supreme Court’s recent decisions that bolstered religious rights have called into question whether government requirements must allow for faith-based objections, legal observers said. Although courts have halted enforcement of the New York health care worker vaccination rule on religious objectors, a federal judge refused to follow suit on a similar regulation in Maine.

Looming on the horizon is a major legal battle over the Biden administration’s plan to require large employers to mandate vaccination or regular testing. That dispute, however, will likely turn on whether the Occupational Safety and Health Administration has the power to issue a regulation calling for workplace mandates, not the legality of requiring workers to get the shot.

Courts may also have to resolve whether that federal rule trumps state restrictions on workplace vaccine mandates, like the one that Texas Republican Gov. has rolled out. , , and said they will follow a federal inoculation requirement for government contractors, potentially setting the stage for a clash over federal and state power.

The first cluster of lawsuits against workplace inoculation requirements, filed in the first half of 2021, focused on the vaccines’ authorization as an emergency product. Workers claimed that federal drug approval law refers to such products as “unapproved” and says individuals have an option to refuse them.

A Texas federal judge handed down the first ruling on that argument in June, throwing out a lawsuit against Houston Methodist Hospital. That decision is on appeal at the U.S. Court of Appeals for the Fifth Circuit.

Two months later, regulators upgraded the vaccine made by and its partner BioNTech SE from “Emergency Use Authorization” to full “Biologics License Application” approval.

“Once the Pfizer vaccine made it from EUA to BLA, that took the winds out of the sails of an argument that seemed more rhetorically if not legally powerful,” said Glenn Cohen, director of Harvard University’s Petrie-Flom Center for Health Law Policy, Biotechnology, and Bioethics. “Without that card to play, the challengers have much weaker-sounding arguments.”

Most of the cases targeting vaccination mandates remain pending, with some cases reaching appellate courts. But aside from lawsuits targeting how religious or health-related accommodations are treated, the allegations against vaccination requirements haven’t gained traction in courts.

Constitutional claims brought against companies have failed because private employers aren’t state actors, while they’ve fizzled against public employers due to the high court’s Jacobson ruling.

Some challengers who’ve been infected by the coronavirus and recovered have asserted that they don’t need to be vaccinated. At least two courts have rejected that argument, noting that policies that require workers to get the shot are valid despite competing evidence on “natural immunity” versus the protection from vaccination.

A lawsuit from Southwest pilots could test the authority of employers to require unionized workers to get the shot without any negotiations. The pilots claim that the airline violated the Railway Labor Act by unilaterally imposing its mandate.

Federal anti-discrimination law calls on employers to accommodate religious objections, although Supreme Court precedent gives them the power to deny those exceptions if they could cause more than a minimal burden.

The law is unclear, however, on states’ duty to exempt workers with religious reasons for skipping the shot. Six states don’t provide religious exceptions, including California and New York, according to the National Conference of State Legislatures.

Meanwhile, the Supreme Court has issued rulings—like the one temporarily lifting New York’s pandemic-related capacity limits on houses of worship—that expanded religious liberty by giving it what some call “most favored nation status,” said Lindsay Wiley, a public health law professor at American University. That may mean state vaccine mandates that give health-based exceptions must also provide them for religious objections, she said.

“In the unique context of a vaccine mandate intended to protect public health, there is a fundamental difference between a medical exemption—which is integral to achieving the public health aims of the mandate—and exemptions based on religious or philosophical objections—which are unrelated to the mandate’s public health goals,” Levy said in the ruling.