The federal government in April approved a record number of line-speed waivers for poultry slaughterhouses—the most ever in a single month—as the Covid-19 public health crisis makes it harder for customers to find staple foods at grocery stores in many parts of the country.

The U.S. Department of Agriculture granted 15 line-speed waivers this month to allow poultry plants to exceed the normal maximum of 140 birds per minute. That’s the most waivers approved in any single month and one more than the total for all of 2019, according to a database maintained by USDA’s Food Safety and Inspection Service.

Line-speed waivers have been a controversial topic in the poultry and pork sectors in recent years, but the flurry of approvals for poultry plants this month creates a dual danger that could hinder efforts to combat the public health crisis, worker-safety advocates, union officials, and labor lawyers told Bloomberg Law.

Pay boosts that encourage workers in the essential industry to keep showing up for work could result in a greater likelihood that infected workers expose their co-workers to the virus, they say, and also increase the possibility of injury as sickened workers try to handle their normal responsibilities at increased speeds.

“What’s problematic with the USDA doing this in the middle of a pandemic, when they should be focusing on whether plant workers are safe, they’re proceeding to make things simply go faster in these poultry plants.” says Tony Corbo, a senior lobbyist for Food & Water Watch. The advocacy group has sued USDA in the past over poultry line-speed increases.

and Wayne Farms LLC each received six waivers in April, according to the FSIS database. Tyson Foods announced March 31 it would set aside $60 million for hazard pay bonuses for 116,000 workers, tying the pay increases to attendance standards, according to the company’s website. 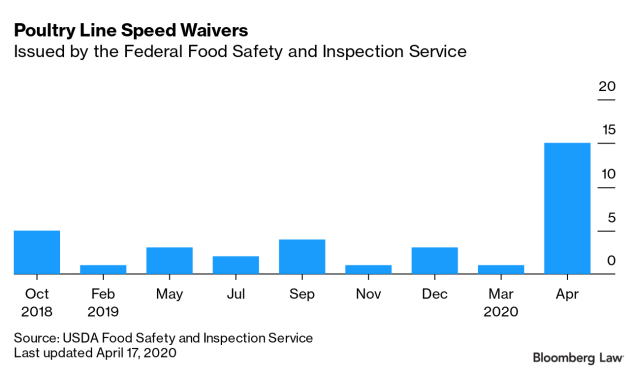 Wayne Farms, owned by Continental Grain Co., is now offering workers a “hero” incentive bonus, so long as employees “meet basic attendance standards,” according to the company’s website. Representatives from both companies weren’t available for comment.

Marc Perrone, president of the United Food and Commercial Workers International Union, warned that hazard pay could lead to more outbreaks at slaughterhouses.

“Bonuses are tied heavily to attendance, and that pressures workers to show up even if they’re sick,” Perrone told Bloomberg Law. “We need to put the safety of these workers and our food supply first by ensuring workers never have to choose between their paycheck and their health.”

The line-speed approvals come as Smithfield Foods Inc. was recently forced to close a plant in Sioux Falls, S.D., after hundreds of pork-processing workers contracted Covid-19. It also shuttered slaughterhouses in Missouri and Wisconsin.

A representative from the National Chicken Council, an industry trade group, told Bloomberg Law in an email that the waivers are the result of a process that started “well before COVID-19 began.”

“There is ample data and experience showing that these line speeds are safe,” said Tony Super, a spokesman for the trade group. “The part of the processing line related to these waivers is almost entirely automated with very few workers. Our injury and illness rates are at all-time lows and are lower than all food manufacturing.”

An FSIS spokesman said in a prepared statement that the agency has “stopped accepting additional requests” for line-speed waivers. The spokesman pointed out that the requests it has handled “were received between August 8, 2019, and February 21, 2020, before a pandemic was declared.”

The agency had considered, but rejected, a line-speed increase to 175 birds per minute during the 2012 to 2014 rulemaking process that created the New Poultry Inspection System. But the agency changed course in a September 2018 Federal Register notice, clearing the way for a rulemaking to make the speed increases permanent for all processors.

“Based on the waivers FSIS has approved,” the FSIS spokesman added, “the agency will have enough data from establishments to assess and determine whether to move forward with rulemaking.”

In February, the Humane Society of the United States, Government Accountability Project, and other groups filed a legal challenge to FSIS’s 2018 plan to increase chicken slaughter line speeds by 25 percent. Poultry processors must obtain a waiver to operate at the higher maximum speed, unlike hog slaughter operations, which have no limitations under a New Swine Slaughter Inspection System adopted in September 2019.

The change is “virtually guaranteeing increases in animal cruelty and public health dangers,” the groups argued in the suit, filed in the U.S. District Court for the Northern District of California.

Peter Brandt, a managing attorney for farm animals at the Humane Society, said his organization will file an amended complaint this week based on the record number of waivers the agency has issued during the pandemic.

“This is a community that is being forced out of their homes to find jobs and to find whatever dangerous work they can pick up for extremely low wages, for whatever income,” Gross said. “The key safety issue is the risk of spreading the disease.”