A former UPS sales director hopes a federal judge in Arizona will deliver an updated take on federal disabilities law, one that would require employers to excuse a worker’s marijuana use for medical purpose.

UPS had a duty under federal—not just state—law to accommodate James Terry’s off-the-job medical marijuana use, Terry says in a potentially groundbreaking lawsuit.

Terry’s lawyer believes his client can prevail under the Americans with Disabilities Act. Lawful medical marijuana use should be permitted under federal law in the same way as the use of other prescription medications is allowed, Christian C.M. Beams told Bloomberg Law.

But Terry and Beams will have a heavy lift convincing a federal district judge that he hasn’t been smoking something funny. At least that’s the consensus of legal advocates unaffiliated with the case who recently discussed it—and the current state of U.S. employment and drug enforcement laws—with Bloomberg Law.

“It’s a tough row under the ADA,” Murray said. He is with Livingston, Adler, Pulda, Meiklejohn & Kelly P.C. in Hartford, Conn., and currently represents a worker in Connecticut who is asserting her rights under that state’s medical marijuana law.

A Lot’s Changed Over Last 10 Years

Matthew Fogelman, another advocate for workers’ rights, sees the same hurdle for Terry. So do a pair of management-side attorneys.

Fogelman said he’s not aware of another case in which an employee using medical marijuana for medical purposes pressed a failure-to-accommodate claim under the ADA. Given the novelty of Terry’s argument under federal law, how the Controlled Substances Act influences the analysis of a workplace claim under the ADA “remains to be seen,” Fogelman said.

He thinks Terry will “face some challenges” in finding success under the ADA. Fogelman is a founding partner of Fogelman & Fogelman LLC in Boston and counsel to a Massachusetts worker fired for off-duty medical marijuana use who in July scored a landmark victory under the commonwealth’s disability discrimination law.

Beams understands that the Controlled Substances Act outlaws marijuana use federally. He nevertheless believes employers are required under the ADA to accommodate a worker who has been prescribed a medication, including marijuana, by a doctor. Beams is a partner with Fredenberg Beams in Phoenix, where he represents both businesses and individuals.

He acknowledged that there may not be any case law supporting Terry’s argument for ADA coverage. But that’s not surprising given where the law on medical marijuana use was 10 years ago compared with now, Beams said.

Impairment Is the Issue, Terry Says

The issue in Terry’s case is “use versus impairment,” Beams said. Employers understandably don’t want employees to be impaired at work, but there was no evidence of at-work impairment in Terry’s case, he said.

Beams said he and the other lawyers representing Terry are still developing their arguments on how to get around the hurdle presented by the Controlled Substances Act and the ADA’s exclusion of illegal drug use. But his “first reaction” is that the purpose of the ADA and similar state laws is to help employees who have a disability, he said.

Arizona is one of a growing number of states that now “require not just a positive test, but also a showing that a worker was impaired at work” before an employer may discipline a lawful medical-marijuana-using employee, management-side attorney Barbara L. Johnson said. A former partner with Paul Hastings LLP for 13 years, Johnson is the founder of Washington, D.C.-based BLJohnsonLaw PLLC and counsel with Potter and Murdock PC. She has written extensively about marijuana and the workplace, employee drug testing, and related topics.

In all, 29 states, the District of Columbia, Guam, and Puerto Rico have laws broadly legalizing marijuana use when authorized by a doctor for medicinal purposes, according to the National Conference of State Legislatures. However, only nine of those states—including Arizona—prohibit employers from discriminating against medical-marijuana-using employees. California is looking to become the tenth state to do so.

Another 17 other states permit the use of medical marijuana that has a low THC level. THC, or tetrahydrocannabinol, is the chemical in marijuana most responsible for its psychological effects. And nine of the 29 states that permit medical marijuana use also allow the drug to be used for recreational purposes. 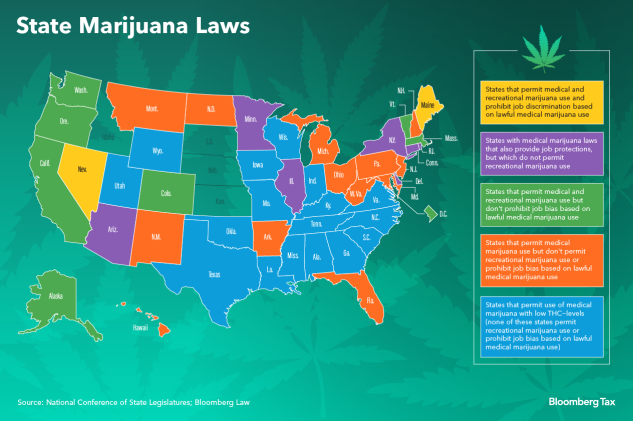 Terry worked for United Parcel Service Inc. from 1984 through April 20, 2017, when he was fired after testing positive for marijuana, despite disclosing his status as a medical marijuana cardholder under Arizona law, according to his lawsuit. Terry had risen through the ranks to the position of director of sales of UPS’s Desert Mountain district and he had no history of performance or misconduct issues. He also never possessed, used, or was under the influence of medical marijuana during work hours or while on UPS property, his court complaint says.

Terry, who according to the complaint suffers from near-constant severe hip pain, uses the drug for pain management, not for any mind-altering effects, Beams said. He said Terry hadn’t used marijuana in the five days prior to being randomly tested by UPS, after which he was summarily fired.

UPS disputes Terry’s allegation that he was never impaired by or in possession of marijuana at work. The company said in its answer to Terry’s court complaint that it doesn’t know whether a doctor has authorized his marijuana use under Arizona law.

It had Terry drug-tested because of his “observable behavior” at work, UPS said in its answer.

“UPS policy is created and administered in a way that takes into account the interests of its employees, its customers, its shareholders and the general public,” Senior Manager of Public Relations Matthew O’Connor told Bloomberg Law in an email. “The company applied its policies in a lawful and appropriate way to this case.”

The company declined to further discuss the case, saying it doesn’t “comment on active litigation.”

“I would like to think that when the court looks at the purpose of the ADA and the facts of Terry’s case, it’ll decide that he should have been accommodated” by UPS, Beams said.

But attorney Dale L. Deitchler, who also represents employers, said there is no case he knows of in which a court has recognized the argument Terry advances.

“My best guess is that Terry’s federal claim” won’t go forward, Deitchler told Bloomberg Law. A shareholder in Littler Mendelson P.C.’s Minneapolis office, Deitchler has years of experience counseling employers on drug and alcohol testing of employees and has written extensively on workplace medical marijuana use.

Unless Terry can “do back flips,” his ADA claim will be barred by a 2012 decision by the U.S. Court of Appeals for the Ninth Circuit,, Deitchler said.

The Ninth Circuit held in James v. City of Costa Mesa that medical marijuana use isn’t protected under Title II of the ADA because illegal drug use is excluded from ADA coverage and marijuana use is illegal under federal law. ADA Title II governs the provision of government services such as public schools and transportation.

That holding ought to apply under Title I of the ADA, which governs employment, Deitchler said.

That’s why most cases involving workers and marijuana use have been brought under state laws, Johnson said. And the top courts in most of the states that had addressed the issue before Connecticut attorney Murray and Boston lawyer Fogelman scored victories in their cases this past summer had found that employers don’t have to accommodate medical marijuana users, she said.

In most of those cases, the court ruled that its state’s law was pre-empted by the Controlled Substances Act, Deitchler said.

The case in which Fogelman is plaintiff’s counsel—Barbuto v. Advantage Sales and Marketing, LLC—was “the first, I think, to recognize a direct claim” for a worker challenging an action that adversely affected his or her employment and that was taken because of medical marijuana use that was lawful under a state law, he said.

Employers need to be aware of the state and local laws in each jurisdiction in which they do business, Johnson said. These companies “can’t have a blanket policy across all business operations. That could get you in trouble,” she said.

She and Deitchler also see potential headaches for employers under the state laws that require proof of at-work impairment before an employee may be removed from a job or otherwise disciplined.

Standard marijuana testing doesn’t really test for marijuana but rather for metabolites, so it doesn’t establish present impairment, Johnson said. And there’s no consensus on what THC level is required to prove “impairment,” Deitchler said.

One consequence of that is employers in these states in essence can’t perform pre-employment marijuana testing because of the difficulty “of showing the impairment needed for this type of testing,” Deitchler said.

If employers in states with impairment requirements “are unwilling to roll the dice on a federal pre-emption argument,” they have to balance the safety and liability risks of retaining a medical-marijuana-using worker against the liability risks of firing him or her, Deitchler said. “Some employers fear the adverse public perception of not accommodating” a medical marijuana user, he said.

He’s prepared employee acknowledgment forms as an added measure for some employers in such states. The forms require medical marijuana users to affirm that they won’t come to work impaired and to authenticate the lawfulness of their drug use, Deitchler said.

But an employee acknowledgment form might not be much insulation from potential catastrophic safety liability, Deitchler said. Many employers, he said, still take the position that marijuana use is considered illegal federally and reserve the right to take adverse employment action against medical-marijuana-using workers.

In Arizona and the other states with similar laws, “that’s a pretty gutsy approach,” Deitchler said.

It would be a significant development if the judge in Terry’s case lets his federal claim go forward beyond the pleading stage, Fogelman said. That would mean his ADA claim has cleared the first procedural hurdle and he can seek information and evidence from UPS that might help him prove a violation of federal law, Fogelman said.

“That’s what happened in our case,” he said, referring to his client’s July victory under Massachusetts law. “We haven’t won” the case yet. “We just got past the motion-to-dismiss stage,” Fogelman said.

Doing so “was significant nevertheless,” and it garnered considerable media attention, Fogelman said.

It also likely has been or will be influential on other courts interpreting similar state medical marijuana laws and their impact on worker rights.

If Terry were to get past a motion to dismiss brought by UPS, that could influence other courts, too, Fogelman said. Once one court rules a particular way, it makes it easier for other courts inside and outside the jurisdiction to follow suit, he said.

“There’s still a stigma regarding marijuana use, even medical use,” he said. It’s diminishing, as it should be, but every positive ruling in favor of a medical-marijuana-using worker “helps move the needle,” he said.

“Drip by drip with these cases” and legislative developments, “the needle moves a little further,” Fogelman said.

To contact the reporter on this story: Patrick Dorrian in Washington at pdorrian@bloomberglaw.com