A boat passes one of the wind turbines of the Block Island Wind Farm on Oct. 14, 2016, off the shores of Block Island, R.I.
Photographer: Don Emmert/AFP/Getty Images

Unions are positioning themselves as a key part of the Biden administration’s goal to deploy 30 gigawatts of offshore wind by 2030, pushing for worker-focused mandates while fielding questions about how it can be done, particularly in the waters off less union-friendly states.

After having lost out on footholds in industries that developed without union buy-in, organized labor is pushing to make sure they’re included at this table, where the many existing skillsets of their members can be put to work. Unions and private developers have already voluntarily agreed to collaborate on some of the slated projects, tapping into what some predict could be tens of thousands of jobs brought about by the industry—but they want more.

Creating equitable work conditions for all workers—including those not in a union—is a priority for labor leaders like Rick Levy, president of the Texas AFL-CIO.

The federal Bureau of Ocean Energy Management “has the power in its own hands to shape the direction of this new technology forever,” said Levy. “It would be more than a shame—whatever word you would use—if we let this opportunity pass us by.”

Project labor agreements are essentially collective bargaining agreements entered into at the pre-hire phase with at least one union. They don’t require workers or contractors to be unionized, but are embraced by unions because they clearly define certain workplace matters. They establish the conditions under which all workers on a project—union and non-union, alike—will toil, such as pay rates and safety procedures.

Some states already require some form of a PLA, but as more leasing opportunities crop up, questions about how the union-friendly agreements will actually work arise. Union density rates in northeastern states with offshore wind goals are some of the highest in the country, for example, while those rates in Gulf Coast states are some of the lowest, and the Biden administration would like as many of these jobs filled with union workers as possible.

The nation is already primed for an offshore wind building boom, driven by a combination of cheap energy prices, investment tax credits, and President Joe Biden’s plan to cut carbon emissions in half by the end of the decade. The White House is starting with the 30 gigawatt goal, and said it wants to scale up to generating 110 gigawatts by 2050—some 6% of the nation’s electricity usage, according to the Energy Department.

Only two small offshore wind projects are currently operating, generating about 42 megawatts of power off the coasts of Rhode Island and Virginia. But that number is set to jump dramatically in the coming years: big projects are being either planned or built off the shores of Massachusetts, Maryland, Rhode Island, Connecticut, Delaware, and New York.

By 2026 or 2027, massive projects are expected to be completed off the New Jersey coast that will generate more than 1 gigawatt each. In the meantime, BOEM is looking for new areas that are suitable for offshore wind energy leasing, and has said it may hold as many as seven new lease sales off the coasts of Maine, New York, the Carolinas, California, Oregon, and in the Gulf of Mexico by 2025. BOEM has already found potential locations off the coasts of California and Hawaii.

Seizing the available opportunities, private employers have forged ahead to establish their own voluntary project labor agreements.

The North America’s Building Trades Unions and —an established player in the offshore wind industry—announced their sweeping agreement in May. The agreement includes training and development provisions to increase “union construction workforce capabilities,” a company statement said.

Ørsted, based in labor-friendly Denmark, has extensive experience working with unions, according to Mike Williams, a senior fellow at the Center for American Progress, a left-leaning think tank.

“Ørsted has set the table for everyone else,” he said. “Others are following suit.”

Allison Ziogas, Ørsted’s US labor relations manager, comes from a union background, and said that project labor agreements allow for expeditious resolution of disputes that can arise on highly complex matters like offshore wind construction.

“You’ve got multiple workforces, multiple contractors, and a PLA helps ensure that the project is delivered on time and that quality standards are met,” she said. “Probably the best kept secret that shouldn’t be is that they have the largest training infrastructure in the US, second only to the US military. We’re working with their journeymen and apprentice training centers throughout our footprint.”

Other employers have done the same, or are in the process of doing the same. Dominion Energy, for example, is also negotiating an agreement with three unions—the Virginia State Building and Construction Trades Council, the International Brotherhood of Electrical Workers, and the Laborers International Union of North America Mid-Atlantic Region—on an expected project off the Virginia coast.

Approximately 77,300 workers could be employed in the offshore wind industry by 2030, with that number potentially rising to more than 135,000 by 2050 according to one report. 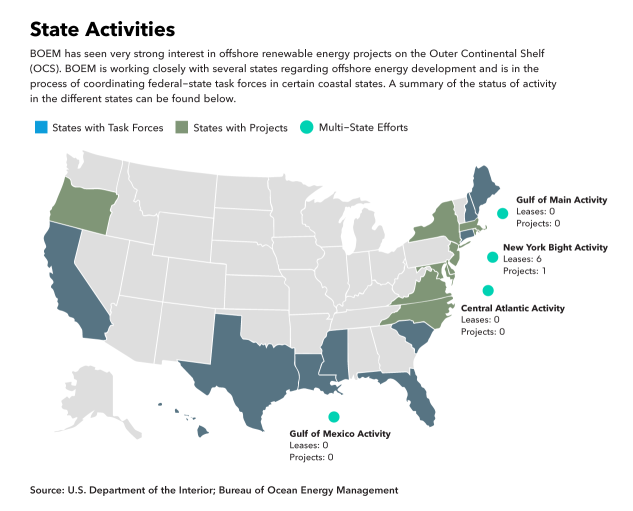 Connecticut, Maryland, Massachusetts, New York, and New Jersey already require some form of a PLA, according to a white paper funded by the AFL-CIO-backed group the Labor Energy Partnership. The agreements include “wage standards and training or apprentice requirements.”

But lawmakers and state and national union leaders would like to expand beyond private partnerships by way of additional federal government-mandated PLAs, especially in Gulf of Mexico-adjacent states, as lease opportunities open up.

Eight Texas House Democrats called on BOEM last month to “require that all development in connection with the lease areas be done with union labor, under a project labor agreement (PLA), and that economic and social benefits of the projects are directed back to the communities most impacted by climate change and the transition to renewable energy via Community Workforce Agreements.”

“BOEM has a real weapon at its disposal if it wants to promote project labor agreements: it can stipulate that any company bidding on a lease will get credits if they include mechanisms for PLAs,” said CAP’s Williams. “This is something that has real teeth.”

But the National Ocean Industries Association, an industry group, recently cautioned against mandating PLAs in recent comments on future opportunities off the coast of Oregon, saying “such agreements are complicated and not suited for all areas.”

“They also are not necessarily appropriate as a requirement given the already prescriptive nature of federal OCS leases,” the group commented. “Our members are dedicated to ensuring that domestic energy creates domestic jobs, but the nature of those agreements should be considered on a case-by-case basis to the extent possible under state law.” 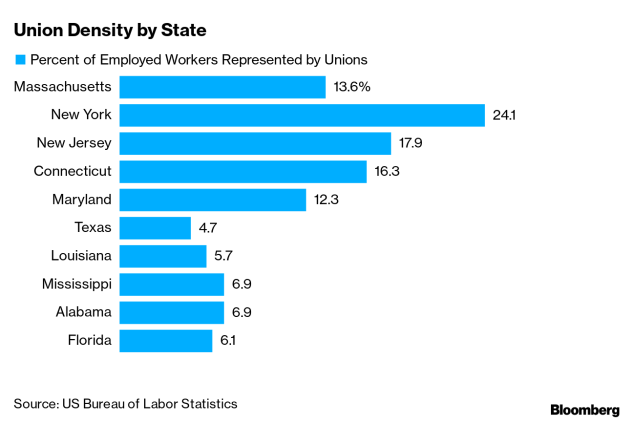 “One thing that we are really pushing is for the administration to set the standard,” said Kendall Martin, general vice president of the Ironworkers. “It’s going to have to come from them down, in order to make sure that people in right-to-work states and places where there’s anti-union sentiment are held accountable.”

Where the union workers will come from is an open question, and whether opportunities will be lost for locals if out-of-state workers are brought in, according to Ben Brubeck, vice president of regulatory, labor and state affairs at the Associated Builders and Contractors.

“That’s something that does happen, but we prefer to have opportunities created for all workers and contractors, instead of those that are just union,” Brubeck said. “ABC members do offshore wind work, and they are frustrated when they’re cut out of these projects as a result of PLAs.”

Prioritizing local workers isn’t a new phenomenon, according to Martin. For example, certain laws within city and state governments include local hiring requirements, and some collective bargaining agreements have worker-to-apprentice ratio requirements, to bring in new local workers.

Kendall Dix, national policy director at the Gulf Coast Center for Law and Policy, said offshore wind can be an opportunity for workers—especially those who haven’t benefited from the oil and gas industry in the Gulf of Mexico.

“We don’t have high rates of unionization, which has been tough, but we do have unions, and they are, in some cases, doing some of the stronger political work,” he said. “We’re always going to be concerned about whether or not the benefits of any project will go to those who need it.”

Jessica Eckdish, vice president of legislation and federal affairs for the BlueGreen Alliance, said that with new job opportunities can come safety concerns, which can be addressed in PLAs.

Dix also noted that the offshore industry is incredibly dangerous.

“Unions advocate for a lot more than pay,” he said. “In the past, you know, I don’t think that there has always been perfect alignment between environmental groups and unions, but with something like offshore wind, you’re really seeing a change there.”