Unionized workers say they don’t want to be replaced by automation, and unions are beginning to address their concerns.
TOBIAS SCHWARZ/AFP/Getty Images

Automation was also among the concerns expressed by the tens of thousands of hospitality workers in Las Vegas who threatened a strike in June.

And during Longshoremen contract talks in 2014, the main obstacle was the expansion of technology that at some ports was replacing up to half of the workers with robots.

The message in all three cases was clear: Unionized workers don’t want to be replaced by automation. And as technology enters the workplace with increasing speed, that message may grow louder.

Unions are addressing this challenge by asking for contract clauses that provide job security and guarantee retraining should a bot take over their existing duties. 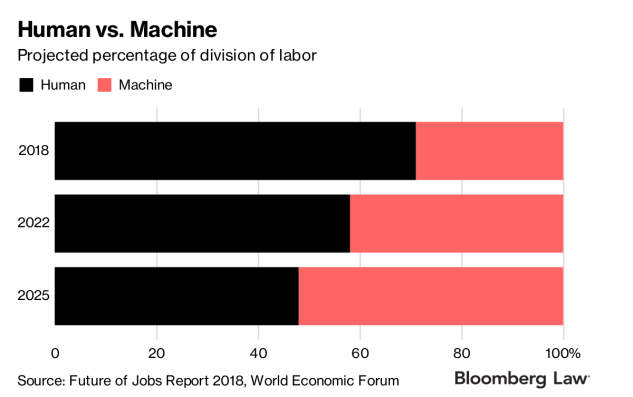 About 75 million jobs will be displaced in the next four years by the implementation of new technology, according to a report published in September by the World Economic Forum. New technology is estimated to create 133 million new jobs, but a majority of those will require significant upskilling or training.

New technology means unions need to be become more vocal, according to Transport Workers Union International President John Samuelsen, one of the organizers of the Ohio bus coalition.

“We can and we will win this,” Samuelsen told Bloomberg Law. “We have to stand together and we have to fight back. We have to just draw a line in the sand.”

One way unions are addressing new technology is by bargaining for training and for the flexibility to change positions when roles become obsolete, Thomas Kochan, co-director of the MIT Sloan Institute for Work and Employment Research, said. “Significant investment” is needed to develop “the knowledge and capability” of union workers so they’re prepared to take on new job functions when technology automates certain tasks, he told Bloomberg Law.

“Continuing education and having access to education is going to help our members adapt and be prepared to be more agile in the workplace, whatever their future work may look like,” Knuti told Bloomberg Law.

But that focus on education and retraining is going to have to be part of a larger focus of the government, according to Charles Heckscher, the director of the Center for the Study of Collaboration in Work and Society at Rutgers University.

A number of commissions, councils, and task forces are exploring the effect of technology on the workplace.

The AFL-CIO established the Commission on the Future of Work and Unions in 2017 to study advances in technology and changes in the workforce. It has held a number of public discussions and will present its findings next year.

President signed an executive order in July that created a National Council for the American Worker and an American Workforce Policy Advisory Board that will in part seek additional ways to train workers. The council held its inaugural meeting Sept. 17.

The introduction of new technology doesn’t mean employees are out of a job, union representatives told Bloomberg Law. It may just mean different jobs.

When self-checkout was introduced to retail and grocery stores, the UFCW negotiated new job functions for workers to oversee new checkout areas, according to Knuti.

And when parking attendants represented by the Teamsters in San Francisco were threatened by automation in parking lots, the union helped negotiate jobs with different tasks at the parking companies, Teamsters spokeswoman Kara Deniz said.

In Washington, the board that oversees the public transportation system has no plans to replace operators, citing safety concerns.

“With the frequent repair and maintenance of the rail, it would be virtually impossible for automation to work safely and effectively,” a spokesman for Amalgamated Transit Union 689 told Bloomberg Law.

Even in Ohio, where the anti-driverless bus coalition began, there are no plans to replace bus drivers anytime soon, a spokeswoman for Drive Ohio, the initiative introducing the driverless shuttle in Columbus, told Bloomberg Law. The bus is an educational showpiece that operates along a riverside park area, and an operator will be on board as a backup.

“We were huge idiots and didn’t know what we were doing,” Musk said.

Tesla didn’t respond to a request for comment on its automation efforts.

The lesson is that automation isn’t always a replacement for labor, Kochan said. It can complement and enhance labor but when companies attempt full automation and cut workers, it often backfires, he said.