The federal government is experiencing a severe shortage of younger workers, which is causing problems now and may lead to more later.

Five times as many federal workers are over age 60 than under age 30 in the booming area of information technology, Max Stier, president of the nonprofit Partnership for Public Service, told Bloomberg Law. The lack of younger employees in this field is striking and indicative of a broader problem for federal agencies, he said.

The government needs to prepare now to avoid “talent pipeline” problems down the road in IT and other in-demand fields, Stier said. The situation will get worse if agencies continue to fall behind in recruiting and retaining a new generation of employees, he said.

About 6 percent of all full-time federal employees are under age 30, compared with 24 percent of the private-sector workforce in that age group, Stier said.

The low unemployment rate in the U.S. is making it more difficult to recruit people with needed skills, according to Jeffrey Neal, senior vice president at management consultant ICF. Neal was the top human resources official in President Barack Obama’s Department of Homeland Security.

“It depends on the occupation. If you’re looking for top computer engineers right now, government isn’t where these folks are going,” Neal told Bloomberg Law.

The government competes well with private-sector retirement packages and health plans, Neal said. Federal workers still get defined benefit pensions, which are becoming rare in the private sector, and the federal health insurance program offers a range of plans with affordable employee premiums, he said.

But the government “can’t pay really serious dollars” for people with in-demand skills, he said. The General Schedule pay system for white-collar federal employees currently tops out at about $164,000.

The complicated hiring process for federal agencies also is a barrier, Neal said. It can take months for agencies to process job applications, compared with days for some private-sector employers, he said.

Unemployment in the U.S. was as high as 10 percent in October 2009, according to the Bureau of Labor Statistics. It was 3.8 percent in May, BLS figures show.

You, Too, Can Change the World

Too many federal managers think in terms of replacing employees who leave on a one-to-one basis rather than more globally about their future workforce needs, Sean Morris, government public services human capital leader at management consultant Deloitte, told Bloomberg Law.

“You don’t want to be in a situation where you don’t have a plan,” he said.

There’s the altruism angle—the chance to make a difference—and the opportunity to move to a variety of jobs at different agencies, he said. Both of these should make federal employment a draw for millennials, he said.

“We haven’t figured out how to allow more mobility” among and within federal agencies, Morris said.

The government also hasn’t consistently advertised itself as an employer for people who want to change the world, he said. It will be much better able to appeal to millennials “when it figures this out,” Morris said.

One reason the government’s workforce is older has to do with education levels, said Mallory Barg Bulman, vice president for research and evaluation at the partnership. 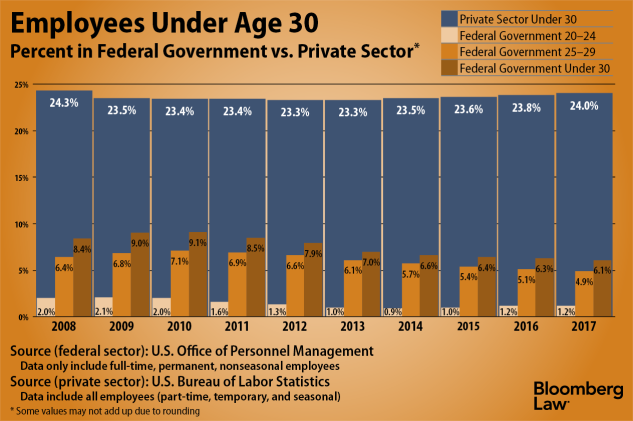 It takes time for people to complete college and earn advanced degrees, which explains why the imbalance between the private sector and the government is more pronounced for employees in their early 20s versus the late-20s age range, Bulman said.

It is illegal to discriminate against job candidates based on age, and an Office of Personnel Management spokesperson said the government “does not engage in age-specific recruitment.”

To attract workers, the OPM is enhancing the government’s student loan repayment program, its internship programs, and its online hiring website, the spokesperson said.

“OPM’s outreach team continues to conduct in-person and monthly virtual outreach activities to educate students and recent graduates from all segments of society about job opportunities,” the spokesperson said.

The Trump administration needs to change its approach to the federal workforce if it “wants to recruit any new employees, regardless of age,” the president of the National Treasury Employees Union told Bloomberg Law.

“Going after the pay and benefits of federal employees and issuing an executive order aimed at making it easier to fire its own employees does not make for an inviting help wanted ad,” NTEU President Tony Reardon said.

President Donald Trump issued an executive order May 25 that cuts the amount of time given to federal employees to improve their performance before they can be fired. The NTEU is challenging that order in a lawsuit.

Trump also proposed a freeze for calendar year 2019 on the across-the-board pay increases that federal employees normally receive in January. Congress can overrule the president’s proposal by including a pay increase in must-pass legislation, but federal lawmakers haven’t done so in recent years.

The administration also has proposed reducing cost-of-living adjustments for some retirees, eliminating them for others, and requiring current federal employees to pay more toward the cost of their retirements.