Like the U.K., the U.S. is now collecting detailed race and gender pay data from thousands of companies in an effort to eliminate discrimination in compensation. But unlike the U.K., the U.S. has no plans to make the data public—and, thanks to a recent decision by the Equal Employment Opportunity Commission, it may only be collected once.

The first uniform attempt in the United States—after a years-long legal battle and a Trump administration effort to scuttle the effort—will move forward with more than 60,000 employers scrambling to meet a Sept. 30 deadline.

Since 2017, Britain’s pay data analysis revealed that nearly 90% of companies have a pay gap that favors men over women. The first two years of collecting and publicly displaying aggregate salaries of workers in the U.K. didn’t show the gap close, but the data reporting effort pushed companies to be competitive and avoid scrutiny by incorporating new recruitment policies and facing internal reckonings to close the gaps.

Wage transparency has widely been seen as a way to address pay inequities, and federal governments in Europe, including France, Germany and Denmark, have created uniform models of collecting company data. In the U.S., the #MeToo movement has drawn attention to the pay gap, prompting heightened awareness of how power inequities in the workplace translate to pay, leading to states passing measures to address the status quo of paying women less than men.

Many companies, from tech giants to financial institutions, are now being pressured to report data to shareholders, and workers are pressuring their employers to be transparent.

“The question will be what will they do with the data?” asked Rupert Younger, director of the Oxford University Centre for Corporate Reputation. “Without transparency you may find endless debate and delay tactics. The benefit of transparency is that it pushes it straight to the level of reputation for fair play.”

The U.S. data collection effort began when the Barack Obama administration’s EEOC expanded an annual report required by companies with more than 100 employers to include not just race, ethnicity, and sex data, but breakdowns of how workers in comparable positions are paid in hundreds of specific data points. The EEOC started collecting workforce diversity data in 1966, utilizing its authority under Title VII of the 1964 Civil Rights Act.

It was an effort to address pay equity gaps that show women making 80 cents on the dollar compared to men in comparable positions, according to an American Association of University Women study. The gap was wider for women of color. Before the collection began, the Trump White House’s Office of Management and Budget stopped it. Pay equity advocates successfully sued to revive the action.

The United Kingdom’s effort is similar to other wage transparency efforts, including in France, Denmark, and Iceland. Many of these have steep fines or enforcement actions. There’s some evidence these efforts can pay off. A study from several business schools, including Columbia University and the University of Copenhagen, found that in Denmark, which requires companies with over 35 employees to report pay data by gender, the gender pay gap shrunk by 7 percent.

Companies that operate in multiple jurisdictions must comply with the European models, the new U.S. federal attempt, as well as the various state attempts to address equal pay, a partner and co-chair of Seyfarth Shaw’s pay equity group Christine Hendrickson told Bloomberg Law. An effort that would create an identical requirement in California is still pending in the state Senate.

“They’re really navigating this maze of reporting requirements,” she said. 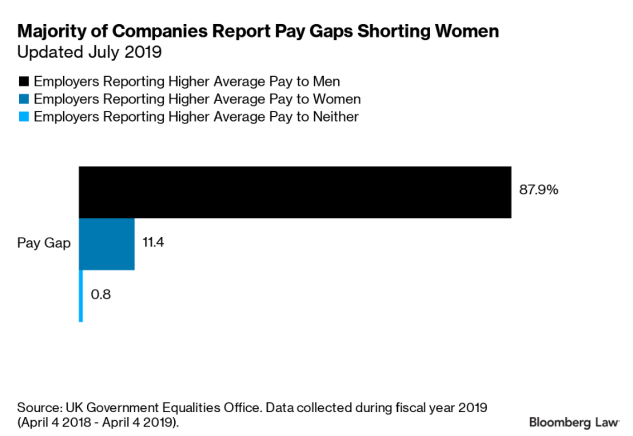 The U.S. and the U.K. efforts are frequently compared. The biggest differences between the two collections are how detailed the data is, and how public it’s made after it’s been collected.

The U.S. collection is detailed, grouping an individual worker’s wage and hour data into one of 10 job categories, then sorted into one of 12 designated pay bands. Business groups say it’s an onerous task and the categories won’t provide a meaningful glimpse into the pay of workers who are similarly situated.

On Sept. 11, the EEOC agreed that collection of the data would be difficult. The commission announced that there will be no future pay data collections, at least for now.

The U.S. collection will also be kept private on an individual company level, the EEOC has assured employers. And if American employers don’t turn their data over, the EEOC will pressure them to do so through a court order.

“The UK initiative gathers less fine-grained data but is public—it leverages the power of sunlight by requiring companies to publish overall gender wage gaps,” National Women’s Law Center Vice President for Education and Workplace Justice Emily Martin told Bloomberg Law in an email. “And by making the data public, it creates public pressure for companies to explain these gaps, set out a plan to close them, and show progress toward equality.”

The U.K. requires organizations to post the data on external-facing websites. The U.K. collection also gives employers an opportunity to provide additional context on why their pay gaps might be what they are, Hendrickson said, something her clients often take advantage of.

U.S. employers fear more enforcement and a wave of bias lawsuits if the data is used against them by the civil rights agency. The #MeToo movement has already inspired a wave of gender discrimination lawsuits.

Yet, across the pond, the number of individual pay bias lawsuits filed hasn’t spiked with the reveal of gender pay gaps, Virginia Allen, a partner in the U.K. for the global firm Dentons, said.

“The gender pay gap data gives us information about average pay by gender, whereas equal pay claims arise where someone of one sex (typically a woman) is paid less,” than someone of the opposite sex for doing a similar role, Allen said in an email. “Gender pay gap data does not give any details of the differences in pay at an individual level.”

Companies are responding to the demands of the U.K. pay gap disclosure, Mike Delikat, a partner in New York with Orrick, Herrington & Sutcliffe said. Delikat, who acts as Citigroup’s global pay equity adviser, said the financial giant tried to look at how it could make sure more women were in its higher paid positions to mitigate the gap. The U.K. pay data collection can skew the numbers and show greater disparity because there are more men in a certain pay band, he said.

Some U.S. companies have conducted independent pay audits, either responding to activist shareholder proposals to release their data or a cultural shift. The efforts, unlike measures mandated by the government, aren’t standardized, nor unfiltered.

Shareholder groups, including Arjuna Capital, have been bullish in recent years, pushing companies to reveal pay. The group’s Gender Pay Scorecard, released in April 2019, ranks major companies in how they report their data, naming and in the lead. Others, including and remain guarded in their disclosures and lag behind.

“Companies want to be out ahead on this issue, and are moving toward transparency on the unadjusted raw gap number like they have to do in the U.K.,” Delikat said. “The companies that are active in this believe it’s important for their workforces. Internally, it makes a statement to their markets and creates a competitive advantage.”

Kelly Dermody, a partner in San Francisco with Lieff, Cabraser, Heimann & Bernstein who represents workers in sex discrimination cases against Goldman Sachs, and said she thinks many of the self-released pay audits conducted by companies are “essentially worthless” because they usually aren’t required to use the right criteria to compare similar workers.

“When you see things like that, it’s worth a healthy dose of skepticism,” she said. “I’m impressed by companies who find discrepancies and fix them. A lot of what we see is a defense of the status quo.”