A graphs shows the DAX at the opening bell at the New York Stock Exchange on March 19, 2020 at Wall Street in New York City.
Photographer: Johannes Eisele/AFP via Getty Images

The magnitude of the economic devastation being wrought by the coronavirus pandemic was laid bare on Thursday when the U.S. government reported an unprecedented surge in the number of people seeking jobless benefits.

A total of people filed for unemployment insurance in the week ended March 21, dwarfing previous highs in Labor Department reports published since 1967. Two weeks earlier, before closures of businesses swept across vast swaths of the country, the number stood at 211,000, close to a half-century low. 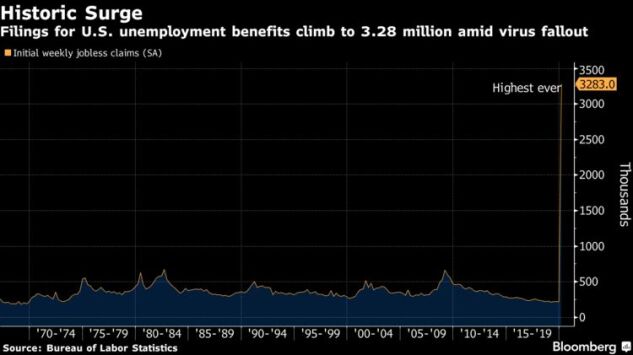 “This shows the severity of the downturn, and the speed of it,” said , head of U.S. economics at Bank of America Corp. “It speaks to the unusual nature of this recession -- it is an abrupt plunge into recession versus prior downturns, where the shock has time to multiply. We could have very high numbers continue for the next few weeks.” 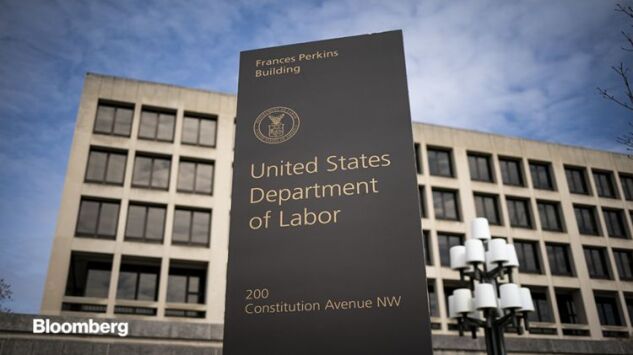 Economists’ for the figure ranged as high as 4.4 million. Before adjusting for seasonal fluctuations, initial filings were at just under .

Even with the surge, the S&P 500 extended its advance, heading for its three-day rally since February, as investors speculated the $2 trillion rescue package passed by the Senate will lessen the pandemic’s toll on the economy.

Claims increased in all 50 states and the District of Columbia, with nine states reporting jumps of at least 100,000 from the prior week, unadjusted state data showed:

“This morning’s data leaves no doubt that the economy is currently in a recession,” said , chief U.S. economist at Deutsche Bank AG. 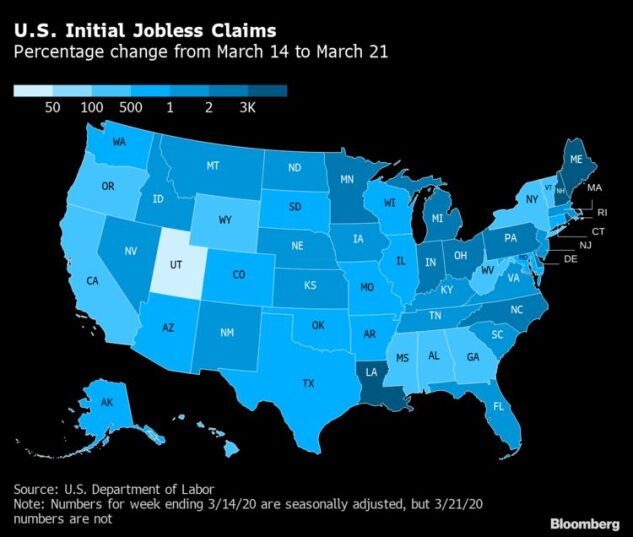 “The deterioration in claims to date already implies an unemployment rate approaching 5.5% in April, and there is no reason to believe this is the peak. The volume of applications overwhelming state administrative offices suggests additional million-plus weeks for initial claims may lay ahead.”

U.S. lawmakers are aiming to boost benefits for those laid off. As part of a $2 trillion stimulus package waiting to be approved by the House of Representatives, unemployment insurance would be extended and expanded.

The sharp rise in claims signals the could rise several percentage points in coming months, after matching a 50-year low of 3.5% in February, which reflected unemployed Americans.

The sudden stop of the nation’s economy paired with a consumer retrenchment have predicting gross domestic product will shrink in the second quarter by the most in quarterly records dating back to 1947.

In St. Petersburg, Florida, getting benefits has already stymied sportswriter Jim Holliman in the first days of his unemployment. Holliman, 47, had been freelancing for a unit of CBS Interactive focused on sports gambling in recent months, and he hoped to turn it into a full-time gig. He’s been in and out of jobs since his longtime employer, the Tampa Tribune newspaper, shut down in 2016.

Coverage opportunities dried up this month as major sports leagues and arenas closed. By late last week, his employer notified him it barely had enough work for full-time reporters, Holliman said Wednesday. “I was getting close to 40 hours a week freelancing and hoping to turn it into a full time job, and then obviously the sports world hit a brick wall,” he said.