As American meat producers are forced to shutter and slow output at plants amid coronavirus outbreaks, the U.S. government is giving companies a green light to run some facilities at higher speeds -- something experts and labor advocates have long said is dangerous for workers.
PAUL J. RICHARDS/AFP/Getty Images

As American meat producers are forced to shutter and slow output at plants amid coronavirus outbreaks, the U.S. government is giving companies a green light to run some facilities at higher speeds -- something experts and labor advocates have long said is dangerous for workers.

“This decision is endangering blue collar essential workers at a time when we need to think about protecting them and their communities,” said Debbie Berkowitz, director of the Worker Safety and Health program at the National Employment Law Project.

The National Chicken Council, however, said that the part of the processing lines related to the waivers are mostly automated with very few workers.

“Quite frankly, inciting unnecessary fear at this time is irresponsible. Our members are trying to keep families fed during these unprecedented times and are literally working around the clock to try to keep workers safe and produce safe food that people are waiting in line for,” said Tom Super, a spokesman for the chicken group.

The coronavirus pandemic is now spreading from urban cities into rural areas where much of America’s food production takes place. Just in the past week or so, hundreds of poultry, beef and pork workers have tested positive for the virus, leading the likes of Cargill Inc. and Smithfield Foods Inc. to shutter plants. Two people employed at a Tyson Foods plant in Georgia died from complications due to the virus, according to union officials.

The outbreak is highlighting the often dangerous role that workers play to provide the world with plentiful, affordable food.

“We’re working hard to protect our team members during this challenging and ever-changing situation, while continuing to fulfill our critical role of helping feed people across the country,” said Morgan Watchous, a spokesperson for Tyson. “We are addressing line speed on a case-by-case basis. At this point, we haven’t made any drastic increases, and in some cases, we’re slowing down the line to allow for social distancing and safety of our team members.”

Frank Singleton, a spokesman for Wayne Farms, said “line speeds are controlled and reviewed by USDA, so we follow their guidelines and recommendations, including on this waiver.” 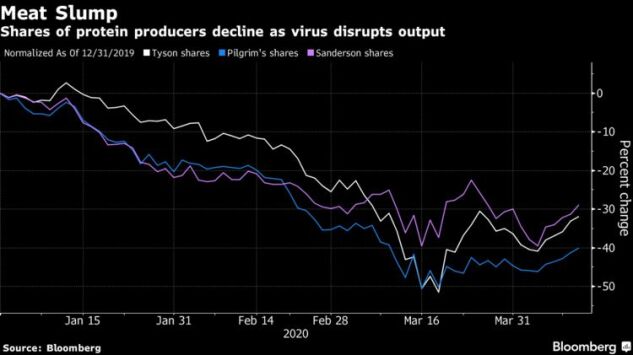 Plants have to seek permission for the line-speed changes under a USDA program called the New Poultry Inspection Service (NPIS). While waivers have been available since the program was started in 2018, companies are drawing backlash by applying for them at a time when many employees are already at risk of getting sick. The increased speeds could add further pressure on vulnerable workers, critics say.

Poultry workers already suffer from high rates of on-the-job injuries, including carpal tunnel syndrome and nerve damage due to the repetitive motions required to do their jobs, a 2015 report from the Centers for Disease Control and Prevention found. The concern, as the National Employment Law Project has noted, is that faster line speeds will worsen these already dangerous conditions.

“Allowing line speed waivers at a time when poultry workers are getting sick and dying around the country,” partly because “the federal government, including the USDA, has failed to require any protections for these essential workers, is so dangerous, to not only workers and their families, but to the whole community,” said Berkowitz of the National Employment Law Project.

The NPIS program allows poultry plants to run their lines at a rate of 175 birds slaughtered per minute. Standard line speeds run as fast as 140 birds per minute. The program also requires regular pathogen testing and data sharing with the USDA.

The program has been controversial since long before the pandemic. While supported by industry, it has been opposed by groups ranging from advocacy organizations like Food and Water Watch and the Humane League, as well as unions and worker safety groups like NELP. Originally proposed under the Obama administration, the line-speed change garnered so much opposition that it was not enacted. The Trump administration’s USDA reversed that decision in 2018.

To contact the reporters on this story:
in New York at dshanker@bloomberg.net;
in Chicago at lmulvany2@bloomberg.net