The proposal to slash the DOL’s budget by $1.1 billion, to $10.9 billion, next year includes a $407 million reduction in spending on Job Corps centers for disadvantaged youth and $400 million in savings from eliminating the Senior Community Service Employment Program. The official budget documents describe a $2.6 billion, or 21 percent, shave for DOL. However, separate from the budget document, the White House said it would off set some of those cuts with $1.5 billion in newly available funds for DOL workforce development grants, according to a memo from Office of Management and Budget Director Mick Mulvaney.

Fresh off the Feb. 9 passage of a two-year federal spending accord, Congress can now take the White House plan under advisement—or ignore it altogether—as it negotiates individual agency funding levels in the coming weeks. Like any presidential budget request, this proposal is an aspirational opening bid that may not influence what Congress ultimately appropriates. 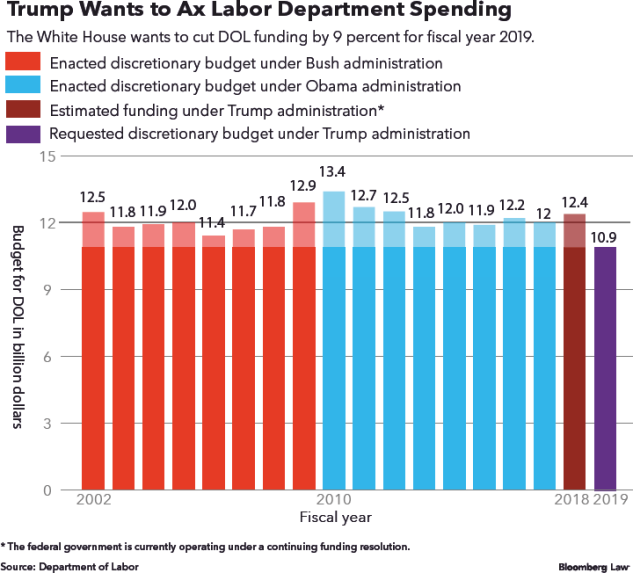 The budget also marked federal agencies’ first chance to detail their highly anticipated reform plans, in accordance with the Office of Management and Budget’s directive to eliminate waste and restructure the civil service bureaucracy. The DOL punted on providing a specific outline on what it has in store, stating that the secretaries of labor and education are in the midst of hashing out a plan to consolidate the nation’s duplicative, fragmented workforce development system. The DOL’s reform plan details will be released in the spring, the White House said.

WIOA, which is administered by the Employment and Training Administration, funds 33 job-training programs across the U.S. Adding to the likelihood that the proposal is dead on arrival to Capitol Hill, WIOA was signed into law in 2014 with overwhelming approval in the Senate (vote count of 95-3) and the House (415-6).

Among enforcement agencies, the president proposed a slight bump in Wage and Hour Division spending, to $230.1 million from $227 million enacted in FY 2017. In a sign of changing priorities, that’s still nearly $50 million less than what President Barack Obama requested in 2016 for the agency charged with enforcing minimum wage and overtime laws. The WHD spending hike includes $4 million in compliance assistance to employers, consistent with the traditional Republican approach to prioritize educating well-intentioned businesses instead of relying on targeted investigations and maximum penalties.

The Office of Labor-Management Standards, which oversees union disclosure requirements, would get a boost to $46.6 million in the next fiscal year. About $3 million of the program increases would be dedicated to the restoration of an office from the George W. Bush administration that was designed to audit large international unions. The Obama administration disbanded the office, which has been criticized by Democrats for harassing unions rather than improving transparency for members.

For the second straight year, the White House proposed taking a 77 percent hack at the Bureau of International Labor Affairs (ILAB), to $19 million from $86 million. That comes despite the urging of the business and labor communities to maintain ILAB funding to ensure U.S. workers are competing on a level playing field abroad.

To help workers displaced by international trade, the budget calls for legislative changes to the Trade Adjustment Assistance program. The White House wants TAA to be more focused on apprenticeship and on-the-job training. The effort to expand apprenticeship programs, the top policy priority in year one of the Trump DOL, would receive $200 million as part of the budget plan.

To contact the reporter on this story: Ben Penn in Washington at bpenn@bloomberglaw.com

To contact the editor responsible for this story: Chris Opfer at copfer@bloomberglaw.com