President Donald Trump speaks during the daily briefing on the novel coronavirus at the White House on April 22, 2020, in Washington, DC.
Photo by MANDEL NGAN/AFP via Getty Images

President signed an executive order on Wednesday temporarily curbing the issuing of new green cards for would-be U.S. permanent residents in what he described as a bid to limit competition for jobs as the U.S. takes steps toward reopening the economy.

“In order to protect our great American workers I’ve just signed an executive order temporarily suspending immigration into the United States,” Trump said Wednesday evening at a White House press conference. “This will ensure unemployed Americans of all backgrounds will be first in line for jobs as our economy reopens. Crucially it will also preserve our health care resources for American patients.” 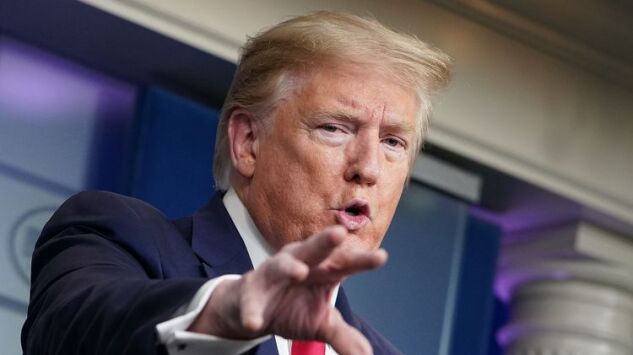 The president’s order will only apply to foreign nationals on foreign soil seeking residency in the U.S., and will not affect those who currently have valid visas or travel documents. It also exempts individuals seeking to permanently enter the country as a medical professional or researcher, as well as members of the armed forces, those seeking asylum or refugee status, and children being adopted by American parents.

While the order only halts the issuing of green cards for the next 60 days, Trump indicated it could be expanded in the future. The document requires the heads of the Department of Homeland Security, State Department, and Department of Labor to make a recommendation on extending or terminating the restrictions at least 10 days before they expire. It also calls on the Labor and Homeland Security secretaries to review and recommend additional measures within the next month.

It also suggests that the president was skeptical of some employment-based visas and could expand the scope of the restrictions.

Trump sidestepped a question about whether the order would apply beyond green card holders during a press conference on Wednesday evening, simply describing the measure as “strong” and saying it could be expanded or curtailed in the future.

”As to amending it or extending it, that we can do at the appropriate time, but it’s now signed,” Trump said.

The president did say there would be carve-outs for migrant agricultural workers, and promised Tuesday to make it even easier for farmers rebounding from the coronavirus crisis to hire labor from other countries.

The order had been expected since Trump tweeted late Monday night that he planned to “temporarily suspend immigration into the United States.”

His tweet caught businesses, farmers, and even some White House aides by surprise, and came before lawyers on the president’s team had finished drafting the executive order. Critics of the administration said that the move would make it harder for families impacted by the coronavirus to reunite and disrupt attempts by businesses to employ critical workers.

“The exemptions kind of outnumber the included, if you look at the total numbers,” said Greg Siskind, an immigration lawyer in Memphis, “and some of those exemptions likely reflect President Trump’s thoughts about immigrants generally as opposed to the labor market. Parents of U.S. citizens and minor children of permanent residents are barred from entry, and they are either too old or too young to compete with U.S. workers for jobs.”

Lora Ries, a senior research fellow for homeland security at The Heritage Foundation, called the order both temporary and narrow.

“It is not bringing in additional immigrant workers for the time being while so many U.S. citizens and immigrants already here in the U.S. are now facing dire economic situations,” she said in a phone interview.

Advocates on both sides of the American immigration debate took issue with Trump’s decision.

“While the order is limited in scope, President Trump’s transparent attempt to distract from his own failures with this unwarranted suspension will cause real pain for families and employers across the country,” Omar Jadwat, director of the American Civil Liberties Union’s Immigrants’ Rights Project, said in a statement.

Dan Stein, president of the Federation for American Immigration Reform, a group that seeks to limit immigration, said that “the huge exceptions carved out to satisfy powerful business interests, allowing them to employ guest workers when the economy does reopen, is a smokescreen that voters -- especially the millions of are out of work -- will quickly see through.”

“The order,” Stein said in a statement “must be updated and revised to ensure that when the jobs come back, American workers will come back too and not be replaced by a new wave of guest workers.”

The order is Trump’s latest move to seal the U.S. border amid the coronavirus pandemic. He has imposed broad travel curbs on China, Europe, Canada and Mexico to contain the virus’s spread.

Yet limiting immigration has been a long-standing pillar of Trump’s presidency. He has slashed the number of spots for refugees and brokered deals with Central American nations to return undocumented migrants to their home countries. Trump has said he does not oppose legal immigration, but he has supported legislative proposals that would dramatically reduce the number of immigrants able to come to the country legally.

On Tuesday, Trump denied using the pandemic as an excuse to advance elements of his immigration agenda.

“No, no,” Trump said. “I want people that are in this country, I want our citizens to get jobs. I don’t want them to have competition.