William Emanuel testifies at his confirmation hearing before the Senate Committee on Health, Education, Labor and Pensions on July 17, 2017.
Image from Sen. Elizabeth Warren's YouTube channel

Former National Labor Relations Board member William Emanuel allegedly broke federal ethics law by failing to monitor investments that created disqualifying conflicts of interest in five cases, according to a previously unreported inspector general memo and other board documents.

The U.S. Department of Justice last year declined to press charges against Emanuel, which ethics experts attributed to the high burden of proof in criminal ethics cases. No evidence has emerged, nor has anyone alleged, that Emanuel intentionally sought to profit from his involvement in the five cases.

But hundreds of emails and financial documents, obtained by Bloomberg Law through a public records request and released by the board as part of an effort to clean up Emanuel’s allegedly conflicted cases, show that his conduct despite repeated warnings created at least the possibility of self-enrichment. The case highlights a broad gap in ethics enforcement that could be exploited by future appointees at the NLRB and other U.S. agencies.

Emanuel’s alleged conflicts have prompted the board to reconsider decisions involving and He cast votes favorable to the companies in all four cases—including the deciding vote in the last one—while holding investments worth close to $300,000 at some points in two exchange-traded sector funds significantly invested in those companies’ shares, the documents show.

“The Inspector General concluded that Member Emanuel’s participation violated a criminal statute, 18 U.S.C. 208 (a), and its implementing regulations,” the board wrote in notices dated Jan. 7, “because of his ownership of a conflicting financial interest in a sector mutual fund.”

A fifth case, which hasn’t been disclosed, was mentioned in the documents. The company wasn’t identified and couldn’t be ascertained through the NLRB’s public case filings. That case hadn’t been decided when Emanuel left the board and remains pending, NLRB spokeswoman Kayla Blado said in an email.

Emanuel was a well-known management-side lawyer when former President Donald Trump appointed him to the board in 2017. He left the board as of Aug. 27, 2021, and is now an attorney at Constangy, Brooks, Smith & Prophete in Los Angeles.

Emanuel declined to comment on his investments and the board’s decision to revisit cases touched by his conflicts. In an email, spokesman Brendan McCormick said Emanuel “doesn’t have anything to add” beyond an August statement when Bloomberg Law first reported the IG investigation.

“At all times during my term on the NLRB, I made decisions based solely on the merits of the matters before me and without any knowing conflict of interest,” Emanuel said in that statement last year.

The alleged conflicts stem from Emanuel’s holdings in two exchange-traded funds (ETFs)—Health Care Select Sector SPDR and Energy Select Sector SPDR. The funds traded shares in CVS, ExxonMobil, Marathon, and Universal Health while Emanuel was working on cases involving those companies, according to copies of financial statements obtained through subpoenas of UBS, Emanuel’s financial adviser, and the ETF managers.

ETFs occupy a gray area in ethics laws for presidential appointees. Investments in diversified funds don’t need to be disclosed, nor do sector-based ETFs if their market value is $50,000 or less. Even though they trade on exchanges like stocks, they are exempt from monthly reporting under the STOCK Act, a 2012 law to prevent insider trading among members of Congress and administrative appointees.

But if an appointee has more than $50,000 in a sector-based ETF, he or she is responsible for monitoring fund managers’ trades to avoid conflicts, according to the ethics rules. With sector-based ETFs, appointees run the risk that one of their decisions could affect that value of an entire fund, not just an individual stock, said Richard Painter, chief White House ethics counsel under President George W. Bush.

“It’s wrong and shouldn’t have happened because you should have known,” said Painter. “That is a great shortcoming of the current ethics regime, that we only have criminal statutes to deal with this. And it creates a terrible appearance.”

When he joined the board in 2017, Emanuel signed an ethics agreement saying he would personally authorize every trade that fell under the reporting requirements, a category that included sector funds worth more than $50,000. He separately promised to “not participate personally and substantially in any particular matter in which I know that I have a financial interest directly and predictably affected by the matter.”

NLRB ethics officers also sent Emanuel detailed checklists in April 2020 about how to comply with ethics laws, including the requirement to monitor sector-based ETFs above the exemption, according to emails obtained by Bloomberg Law.

The reasoning on one of the ethics checklists was clear: “Sector funds have a stated policy of concentrating their investments in the above classifications, such that a single government action could have more of an impact on the fund’s holdings,” Lori Ketchum, the NLRB’s then-acting designated agency ethics official, wrote in a 2016 memo to filers that was forwarded to Emanuel as an email attachment in April 2020.

In other words, NLRB decisions have the power to move markets. And because Emanuel was a Republican who tended to favor employers’ point of view, his involvement stood to raise the value of shares in his ETFs.

On April 7, 2020, senior ethics specialist Kathryn Burow sent Emanuel instructions for submitting his annual ethics paperwork, along with Ketchum’s 2016 memo, attaching a seven-page list of requirements, according to the documents obtained by Bloomberg Law.

A separate memo from Ketchum provided to Emanuel, dated March 2, 2020, had listed five hypothetical conflicts that would require a member to recuse themselves from a case; one involved a sector-based mutual fund worth more than $50,000.

Less than four months later, on June 23, 2020, Emanuel participated in the first of the four decisions the board has now reconsidered, the procedural Marathon case.

Warnings aside, the sector funds should have been “a clear red flag” for potential conflicts, said Virginia Canter, former White House ethics counsel for Presidents Bill Clinton and Barack Obama and chief ethics counsel for the watchdog group Citizens for Responsibility and Ethics in Washington.

“It has limits, and you have to be monitoring the value of the assets,” Canter said.

Emanuel, in the August 2021 statement, said that “at no time was I aware of the names of the many individual stocks held in these sector mutual funds.”

Both of the ETFs he held update their holdings daily on their web pages, which is common for those types of funds.

“In all but one instance the small dollar amounts that could be attributed to me through the fund’s holdings of individual stocks did not exceed levels that would have required me to seek a waiver had I held the stocks individually. When this issue was called to my attention, my advisor immediately sold these sector mutual funds,” Emanuel said in the August 2021 statement. 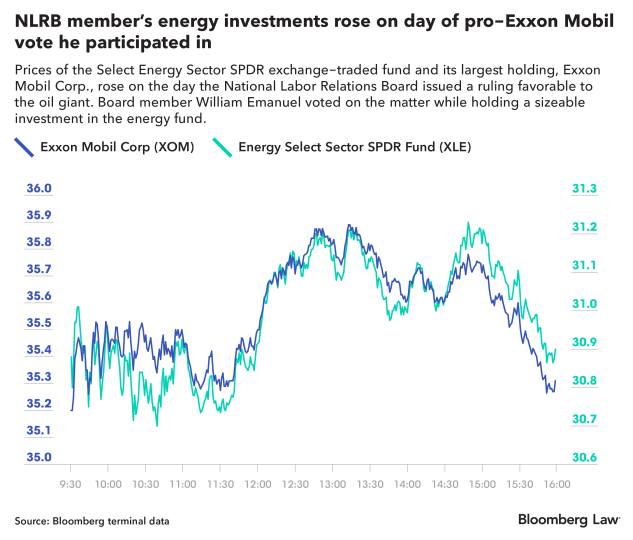 Emanuel was interviewed by NLRB Inspector General David Berry on Aug. 19, 2021, 10 days after the U.S. Attorney decided not to press charges, according to an Aug. 26 memo by Berry.

When confronted about conflicts, Emanuel “generally denied knowledge of his sector fund investments and responsibility for his investment decisions,” and took the position that his agency ethics agreement was superseded by other agency ethics guidance left unspecified in the memo.

“We were not persuaded by these statements, and we determined that Member Emanuel did not comply with his Ethics Agreement,” Berry wrote.

In emails obtained by Bloomberg Law, Emanuel expressed bewilderment about the disclosure requirements in early 2020, a week before receiving the checklists from ethics officials. He had served on the board almost three years by that point. “What is this and does it apply to me?” Emanuel asked Roxanne Rothschild, the NLRB executive secretary, upon receiving a reminder from the U.S. Office of Government Ethics to file his annual disclosure form.

On April 1, Burow advised Emanuel to provide a complete list of account transactions “so we can make sure that all of your mutual funds are reported accurately,” messages show. Two weeks later, Emanuel connected Burow with his personal adviser, who agreed to send records of Emanuel’s investments to the board.

The board’s move to reconsider the five rulings isn’t the first time it repealed decisions because of Emanuel. Democrats in Congress criticized him in 2018 for participating in Hy-Brand Industrial Contractors, a 2017 decision that shielded companies from legal blowback if their franchisees or contractors were caught violating workers’ labor rights.

The board repealed the decision a few months later when Berry found that Littler Mendelson, the management-side law firm where Emanuel worked before being named to the board, had represented one of the parties in the 2015 case that Hy-Brand overturned. Emanuel’s allies argued that Berry used warped interpretation of the law to damage the board member’s reputation.

While federal law prevents government officials from participating in matters where they have a financial interest, prosecutors must prove to a jury that an official knew—beyond a reasonable doubt—that their involvement would have a “direct and predictable effect” on the price of a stock or value of a company.

In Emanuel’s case, there was plenty of doubt. Day-to-day changes in stock prices are driven by a multitude of factors, making it difficult to tell whether Emanuel’s actions had an effect and how much money he might have made.

The price of ExxonMobil—a top holding in the energy sector fund—rose about 2% on Sept. 28, 2020, the day the NLRB overturned a lower board judge’s ruling against Exxon for a number of alleged labor violations, including that a management-side negotiator promised to give workers paid parental leave if they dissolved a union at the company’s facility in Annandale, N.J. The energy sector fund rose similarly but the gains were wiped out the following day. The S&P 500 rose about 1.6% that day.

CVS fell about 1% on Feb. 5, 2021, the day the NLRB sided with the company in a challenge to a lower agency judge’s decision about the scope of a bargaining unit. While shares of Universal Health spiked briefly on May 3, 2021, the first trading day following the board’s Friday ruling, Marathon sagged the day after the June 23, 2020 decision in its favor.

Apart from the movement after the decision, the inspector general identified five trades of CVS stock within the sector-based fund made by the fund manager, that occurred from February to May 2020 while the case was pending before the board. There was one trade of Exxon, two of Marathon, and one of Universal Health Services while their respective cases were before the board, according to data obtained from the inspector general subpoena of the fund managers.

“He should have just stayed out of it,” said Canter, the former White House ethics counsel.