Barbed wire on a section of the U.S. and Mexico border fence in Tijuana, Mexico, on Nov. 9, 2021.
Photo: Cesar Rodriguez/Bloomberg via Getty Images

Federal investigators have been unable to locate most of a group of migrant children allegedly turned over to labor traffickers, but they’ve also found no evidence of exploitation.

At least three agencies looked into reports of potential trafficking or exploitation of unaccompanied migrant children in Enterprise, Ala., and couldn’t substantiate those claims, according to two people familiar with the investigation.

But the unknown whereabouts of many of the children who had been approved by the Health and Human Services Department for release to adult sponsors in Enterprise, a small city in southeastern Alabama that’s home to a cluster of chicken slaughterhouses, exposes major gaps in the government’s inquiries.

While some of the children who weren’t living at the Enterprise addresses listed on their HHS-approved paperwork could have moved to a safer location with a family member, there are still concerns that a network of traffickers used Enterprise as an initial “staging area,” before shuttling them off to different worksites, said one of the sources.

Bloomberg Law reported on the probe in August after learning that the Justice Department’s human trafficking office was aware of “indicators” of exploitation of unaccompanied teenagers in multiple jurisdictions, including Alabama. 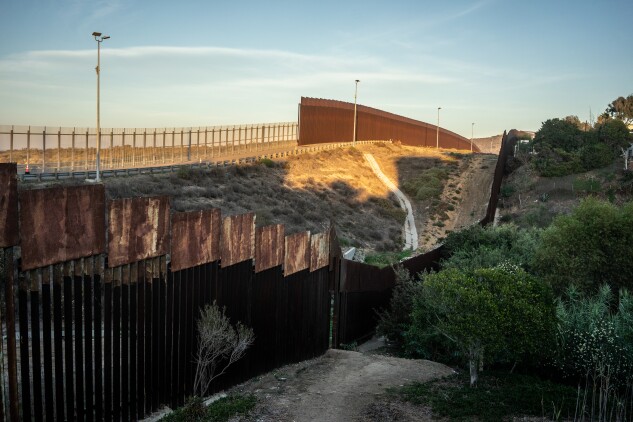 A section of the U.S. and Mexico border fence in Tijuana, Mexico, on Nov. 9, 2021.
Photo: Cesar Rodriguez/Bloomberg via Getty Images

“Some of these situations appear to involve dozens of unaccompanied minors all being released to the same sponsor and then exploited for labor in poultry processing or similar industries without access to education,” wrote Hilary Axam, director of DOJ’s Human Trafficking Prosecution Unit, in a July 21 email to law enforcement officials that was obtained by Bloomberg Law.

The Health and Human Services, Homeland Security, and Labor departments investigated the Enterprise situation but couldn’t track down most of the minors who were placed with sponsors there, according to the people familiar with the investigation. It’s not uncommon for federal officials to lose contact with unaccompanied children after their release from government custody.

The dead end in the Enterprise case highlights apparent gaps in the federal system designed to care for children who cross the border without a parent. HHS’s refugee office cares for unaccompanied minors after they’re picked up by border officials and works to reunite them with a family member in the U.S. or place them with a non-family sponsor.

The status of probes into other jurisdictions, including Woodburn, Ore., following a similar pattern was not immediately clear. A Department of Labor spokesperson said the Wage and Hour Division has investigations open with HHS related to labor violations in the Southeastern U.S., but declined to provide additional details.

Representatives for the Justice, Homeland Security, and Health and Human Services departments either declined to comment or didn’t respond to requests.

The agencies’ review comes as federal lawmakers from both parties demand answers from the Biden administration on the earlier report of potential trafficking.

Sen. (R-Texas) on Tuesday accused the Department of Homeland Security of “washing your hands” of children’s well-being after they’re transferred to HHS and then to sponsors. Secretary Alejandro Mayorkas pushed back on the characterization and said he has “confidence in the dedication” of HHS personnel charged with caring for migrant children.

HHS officials have outlined their processes for sponsor vetting and follow-up services in response to past congressional probes. Some officials have argued that the agency has limited authority to intervene after children are released from the agency’s care.