For resort destinations like Mackinac Island, the availability of seasonal workers could decide whether local businesses are able to meet hiring needs for the busy summer months.

The northern Michigan community has a population of 11,000 but typically needs to bring in 5,000 workers for the visitors that arrive beginning in April each year.

“We’re up against it as far as the amount of people we can recruit locally,” said Tim Hygh, executive director of Mackinac Island Tourism.

For businesses in tourism, seafood processing, landscaping industries, among others, the release of 35,000 additional H-2B seasonal work visas by the Biden administration will be a boon for hiring prospects. But the availability of new visas will be quickly outstripped by new demand from employers who say they can’t find U.S. workers to fill positions.

Firms that have traditionally made use of the program say they’re facing new competition for the visas, which has an annual cap of 66,000 with another roughly 65,000 that can be released on a discretionary basis. Even after the historic labor shortage subsides, groups that help employers navigate the H-2B program say demand for seasonal guest workers isn’t likely to slacken.

“Employers are getting desperate. It’s why you’re seeing this surge in demand,” said Gray Delany, executive director of the Seasonal Employment Alliance. “I don’t see it slowing whatsoever.” 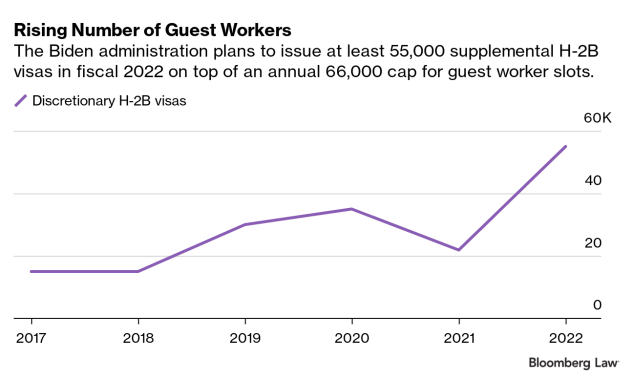 U.S. firms requested more than 136,000 H-2B positions for the second half of fiscal 2022, far surpassing the cap of 33,000 visas in the summer months. The number of requested visas has also grown steadily over the last decade and positions certified by the Department of Labor as unfilled by American workers hit a new high of 95% last year.

Despite opposition from allies in the labor movement, President Joe Biden’s administration has repeatedly expanded the seasonal H-2B program for non-farm jobs. The Departments of Homeland Security and Labor released 20,000 visas on top of the annual cap for winter hiring and last month announced the forthcoming release of additional visas for the summer months, a priority of business lobby groups and lawmakers from both sides of the aisle.

Most will be reserved for returning workers who have received an H-2B visa in the previous three fiscal years, meaning companies that have previously participated in the program could have a leg up. The remaining 11,500 visas are designated for workers from Central America and Haiti to help address economic-based migration to the U.S.

Those countries haven’t historically provided large numbers of H-2B workers. But employers are so eager to hire, they’ll look to use those visas as well, said Luke Hettinger, chief operating and accounting officer at másLabor, a consulting firm that assists companies in navigating the program.

“Our clients want workers however they can get them,” he said. “We need workers. Let’s give it a try and see how it goes.”

The release of more guest worker visas didn’t receive universal acclaim in Congress. Sen. (D-Ill.) and Sen. (R-Iowa), the chair and ranking member, respectively, of the Senate Judiciary Committee, said in a joint statement that additional H-2B visas shouldn’t be released without significant reforms. And organized labor groups have called the program a “failed model.”

Ernest Ojito, international representative with Laborers’ International Union of North AmericaMid-Atlantic Region, said use of seasonal workers in landscaping and construction in particular undermine hiring and wages for U.S. workers. And the federal government inadequately polices worker safety and wage violations for guest workers, he said.

“It’s a race to the bottom,” Ojito said. “They’re not allowed to complain because if they complain, they can’t come back.”

Homeland Security indicated plans last year for new regulations to reform the program, but hasn’t released other details as its announced more forthcoming visas for 2022.

After the release of discretionary visas for the summer months, H-2B supporters are turning their focus to carving out exemptions under annual visa caps. The Seasonal Employment Alliance is advocating for returning workers to be exempted from H-2B limits, Delany said.

Returning workers were last exempted from annual caps in 2016 and previously received exemptions in 2004-2007.

Those exemptions would offer more breathing room to seasonal industries like seafood processing, said Jack Brooks, president of Clayton Seafood Co. in Cambridge, Md. The seafood industry has consistent need for H-2B workers but has faced new competition from other employers.

“Service industries are consuming these visas,” he said. “This is an American jobs issue. We demonstrate the need year after year.”