Those rulings come after the parliamentarian said last week that a proposed minimum-wage increase didn’t qualify for inclusion under the fast-track legislative process Democrats are using to proceed without Republican support.

Moderate Democratic senators are looking to make the package more targeted to the neediest Americans, as the chamber takes up the bill following last week’s passage in the House.

The House passed the aid legislation early Saturday, and Democratic congressional leaders intend to send it to Biden by March 14. Senate Majority Leader said Monday his chamber would take the bill up after voting to confirm Biden administration officials on Monday and Tuesday. There are “late nights” ahead, he said.

Senate parliamentarian has found that provisions bailing out multi-employer pensions and providing laid-off workers with health-care premium subsidies are eligible for the simple-majority process Democrats are using to pass the pandemic-relief bill.

“This economic crisis has hit already struggling pension plans like a wrecking ball, and the retirement security of millions of American workers depends on getting this package across the finish line,” Senate Finance Chair Ron Wyden said in a statement after his office said the parliamentarian made the two approvals.

Wyden also applauded the approval of help for newly unemployed to keep health insurance. “Workers who have been laid off need affordable health care for their families now more than ever, and helping people pay their COBRA premiums will make that a reality for millions,” Wyden said.

Last week, MacDonough ruled that a proposed minimum-wage hike didn’t qualify for the budget-reconciliation process being used for the relief legislation, as it had only an incidental fiscal impact.

Moderate Democratic Senators including of Montana and of West Virginia said after a virtual meeting with Biden Monday that the group discussed making the pandemic-relief bill more targeted.

“It’s probably going to change, but pretty modestly, that would be my guess,” Tester said of the legislation.

Manchin said, “We’re looking for a targeted bill. We want it to be very targeted, helping the people that need help the most.” 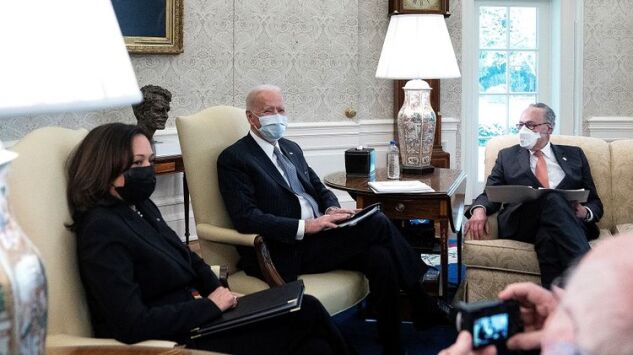 Also in the meeting were of Delaware, Durbin of Illinois, and of New Hampshire, of Colorado, of Maine and of Virginia. The White House also invited Arizona’s and , but they were on flights back to Washington.

Manchin indicated that the aid bill’s $1,400 stimulus checks are under discussion, as is state and local aid. He said he wants to see supplemental unemployment benefits at $300 a week, instead of $400.

Tester said that Biden listened to ideas for changes to the bill, but it wasn’t clear whether the president would support them.

Senate Finance Committee Chair , an Oregon Democrat, said separately that he’d “continue to do everything I can,” to keep the jobless benefits at $400 a week. Wyden also said there might be an effort to better target the direct payments, although he’ll continuing to push for the phase-out to start at $75,000 in adjusted gross income for individuals.-- Erik Wasson, Laura Litvan

Progressive lawmakers gave no indication on Monday that they’re planning to hold the pandemic-relief bill hostage over their demand for including a minimum-wage hike, after Senate Democrats dropped plans to keep the measure in the legislation.

Representative , a California Democrat, had led a call from progressives demanding that the Senate parliamentarian -- who judged that the wage hike didn’t qualify for inclusion under the fast-track legislative process Democrats are using -- be overruled. But on Monday he said he would not vote against the bill over the wage issue.

Congressional Progressive Caucus Chair , asked whether she’d threaten to vote against the aid bill over the exclusion of the minimum-wage hike, said she has to look at the sum total of the bill. Senator of Massachusetts declined to answer the same question. -- Jarrell Dillard, Erik Wasson

Senator Dick Durbin of Illinois, the No. 2 Democratic leader, said the task of passing the $1.9 trillion pandemic relief bill was made “less complicated” after the Senate parliamentarian ruled last week that a proposed minimum-wage hike doesn’t qualify under fast-track budget rules that Democrats are using to pass it without Republican support.

While Durbin said he’s disappointed a House-passed $15-an-hour wage hike is now all-but-sure to be out of the Senate’s bill, he acknowledged the ruling puts aside a proposal that could have cost the votes of moderate Democrats.

Durbin also said he doesn’t expect Vice President to take steps to disregard the parliamentarian’s position -- despite calls by some House Democratic progressives that she do so in her role presiding over the Senate.

“I don’t think that’s going to work,” Durbin said. “I hope that we think very seriously about dealing with the minimum wage in a different venue.”

White House Press Secretary also said the administration remains committed to a minimum-wage hike. The administration will work with “members of Congress, with their staffs, about the best vehicle moving forward. But we don’t have a clear answer on what that looks like at this point.”

Psaki also said that Biden will be speaking with a group of moderate Senate Democrats Monday afternoon as he continues work on getting the stimulus bill enacted. The virtual meeting is set to include nine senators, with Durbin and of West Virginia among them.

Senators in both parties will have a chance to offer what could amount to scores of amendments on the relief package when the Senate takes it up in coming days. While Durbin said he hasn’t seen any of the changes that might be proposed, he doesn’t know of any issues that could divide Democrats in the debate and threaten passage of the legislation. -- Laura Litvan

Biden’s longer-term economic stimulus plan, set to be unveiled after passage of the $1.9 trillion relief bill, will likely weigh in at “at least” $2 trillion, Goldman Sachs Group Inc. economists predicted.

“If the proposal broadens to other areas --child care, student loans, or health care, to name a few possibilities -- the amount could rise substantially” beyond $2 trillion, Goldman economists led by wrote in a note on Sunday.

The program is likely to span 10 years, with a potential increase in spending beyond current projections of $100 billion for 2022, the Goldman team wrote.

Tax hikes will be used to pay for part of the next package, and Goldman estimated lawmakers could enact revenue-raising measures that would bring in about $700 billion to $800 billion net over ten years.