The U.S. Equal Employment Opportunity Commission has been without a Senate-confirmed top lawyer since early March, a vacancy that hinders the workplace civil rights agency’s ability to pursue cutting-edge legal strategies in a similar fashion to past general counsels, former agency officials said.

During the Obama era, for instance, the EEOC general counsel at the time, David Lopez, used litigation to test an unsettled matter of law, helping to bring about a landmark U.S. Supreme Court decision that vindicated the agency’s legal theory.

While not having a permanent, Senate-confirmed general counsel hasn’t stopped the EEOC from pursuing litigation, it means the office is missing the guidance of a leader whose job it is to “send a message of what civil rights litigation looks like,” said Stuart Ishimaru, a former EEOC Democratic commissioner and now a consultant at LMI.

President fired the agency’s Trump-appointed general counsel, Sharon Gustafson, in March 2021 but has yet to nominate a replacement. Career official Gwendolyn Young Reams served as acting general counsel until restrictions in the Federal Vacancies Reform Act required her to relinquish the role at the end of December. Christopher Lage, another career official, currently oversees day-to-day operations of the general counsel’s office. Lage’s extensive EEOC experience, Ishimaru said, will benefit day-to-day operation of the agency’s litigation program.

Some former agency officials questioned whether the lack of a Senate-confirmed general counsel has registered in a significant way, or would in the future. The EEOC general counsel’s office has previously endured extended periods led by an acting head, including at the outset of the Trump administration, before Gustafson was confirmed in August 2019. Yet the longer the EEOC goes without a Senate-confirmed appointee directing the general counsel’s office, several former agency officials and outside observers said, the less time the Biden administration will have to pursue a strategy to advance workplace civil rights law, as Lopez did during the Obama administration.

When Lopez held the post, the U.S. Supreme Court hadn’t yet deemed sexual orientation and gender identity to be classes protected under federal anti-bias law. Lopez tested that issue. The case he brought was one of three decided by the high court’s Bostock v. Clayton County, Georgia decision in 2020 that affirmed workplace LGBT bias is prohibited by Title VII of the 1964 Civil Rights Act.

Gustafson homed in on religious discrimination in the workplace, and hosted several listening sessions with stakeholders on the topic before her tenure was cut short. She also filed litigation that triggered debate about whether a religious discrimination lawsuit could be used as a tool by the agency to encroach on the rights of LGBT workers and other protected classes.

The EEOC, for its part, said it “retains the authority to file and conduct litigation in the public interest,” according to an emailed statement from spokesperson Victor Chen.

When asked about the current vacancy, Lopez, now a law professor at Rutgers University, said Senate-confirmed leaders are more likely to take risks in litigation that could yield big legal or policy payoffs. But, he added, career staff will ensure the litigation program is “well-managed, and to avoid mistakes.”

By all accounts, that’s exactly what has taken place, according to interviews with several former agency commissioners and staff, along with attorneys who specialize in workplace civil rights law. While the general counsel’s job is to oversee EEOC litigation in federal court, there are few tasks the general counsel’s office can’t do without a Senate-confirmed leader. 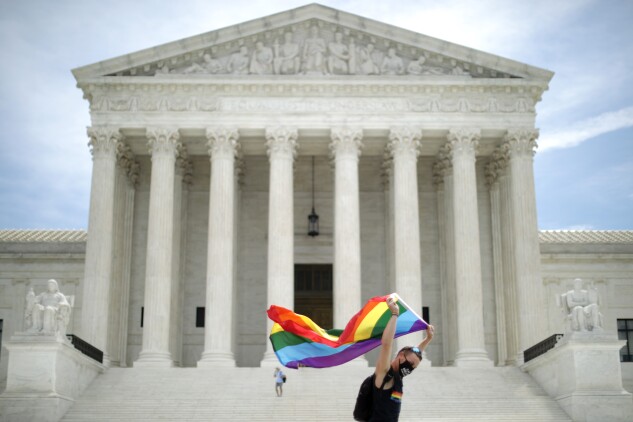 A man carries a Pride Flag as he walks in front of the U.S. Supreme Court building following a landmark decision for LGBTQ rights in June 2020.
Photographer: Chip Somodevilla/Getty Images

“The regional attorneys that are out there, they have a lot of energy. They don’t need a general counsel to say, ‘Oh, I would really like to focus on this,’” Feldblum said. “Because, even if you had a general counsel who said that, I am not quite sure what impact that would have.”

During Biden’s first year, the general counsel’s office focused on at least two major issues—disability discrimination cases related to the Covid-19 pandemic, and a case aimed at clarifying the standard for proving bias under the Age Discrimination in Employment Act, which the Supreme Court recently declined to consider.

Emily Martin, vice president for education & workplace justice at the National Women’s Law Center, said the lack of a Senate-confirmed top lawyer “hasn’t changed anything” in terms of daily operation. “The EEOC is still quite able to do what it needs to do to enforce our civil rights laws,” she said.

She added, however, that a political leader with the Senate’s blessing “helps ensure that there’s some continuity of vision and that people can really buy into strategies and direction.”

The EEOC’s situation isn’t unique under the Biden administration. At least seven other independent federal agencies are now without a permanent general counsel, some of which are Senate-confirmed roles.

Former commissioner Ishimaru said vacancies are common, especially at agencies where leaders serve staggered terms. “That just happens where you have a multi-member commission, where people go on and off on a cycle,” he said.

But the delay in nominating a replacement after Gustafson’s firing stands in contrast to the administration’s quick action in sending paperwork to the Senate for National Labor Relations Board General Counsel Jennifer Abruzzo, who was nominated a month after Biden sacked Trump appointee .

If a Biden-appointed general counsel is confirmed, he or she would likely focus on several issues that EEOC Chair (D) has expressed interested in, such as pay discrimination, said Lipnic, the former GOP commissioner.

The EEOC will be looking to find a case of possible discrimination from employer use of artificial intelligence, a complicated issue that’s already on the radar of the agency’s five-member leadership commission. Republican Commissioner Keith Sonderling has said he’s interested in initiating a targeted bias probe in this area.

The agency will also continue to confront “fallout from Covid,” said Lipnic, now a partner at Resolution Economics LLC. The commission has pursued some disability discrimination cases surrounding remote work, but it may also address the dichotomy between the Biden administration’s push to increase vaccinations and the EEOC often accepting when someone claims a religious accommodation, she added.

Also on the agenda this year is an update to the EEOC’s strategic enforcement plan, which sets the agency’s litigation priorities and other goals, and provides the general counsel with a roadmap for action.

The plan is developed through a collaborative, interagency process and then voted on by the EEOC’s five-member panel. A vote on a new plan is expected in the fall, according to the agency.

(Updated with additional reporting, in paragraphs 15 and 18. An earlier version was corrected to show that Christopher Lage is overseeing the EEOC general counsel's office.)