Global warehouses are stuffed with frozen cuts of pork, wheels of cheese and bags of rice. But as the snarls logistical operations, the question becomes: How does all that food actually get to people?

Despite the inventories, grocery stores are looking almost apocalyptic with aisles of empty shelves. Panic buying has made it nearly impossible for retailers and suppliers to keep up with the unprecedented spike in demand. In just one example of the constraints, there’s a finite number of trucks that can load up at warehouses to bring in the chicken or ice cream or toilet paper that people want to buy. 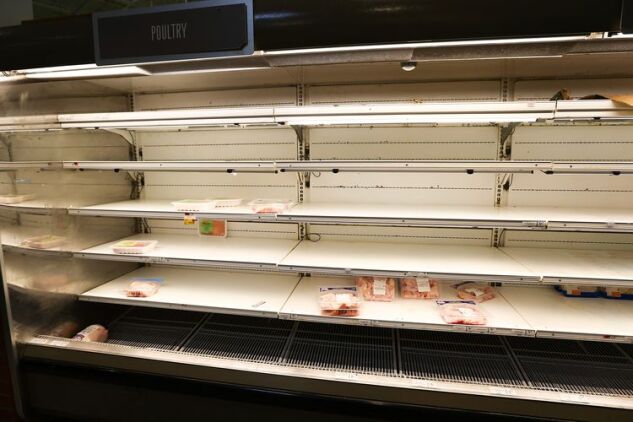 There are limits on how much time can be spent stocking shelves or filling rail cars. Then there’s this weird knock-on from the outbreak in China: Fewer goods were shipped out of Asia last month, and now there aren’t enough empty containers in countries like Canada to send peas out to the world.

“There’s a complicated web of interactions we don’t often think about that’s all part of the food-supply chain: truckers, rail cars, shipping, plant workers,” said Jayson Lusk, head of the department of agricultural economics at Purdue University. There are “big buckets of possible disruption,” and it’s possible the whole thing “is more fragile than we think it is,” he said.

That’s just the start of it. As the virus spreads and cases mount, there are seemingly countless ways the food system will be tested and strained in the coming weeks and months.

There’s the possibility of worker shortages as employees are forced to stay home because they’re ill or they’ve come into contact with someone who is. As schools close, plants may slow production because parents need to prioritize child care. Restrictions on migrant labor are increasing all over the world, stifling workers who are key to making sure tomatoes get picked and slaughterhouses run efficiently. Port closures and limits on trade could end up disrupting the flow of supplies and ingredients.

“We do not see a supply shock in the sense of the availability,” said , a senior economist at the United Nations’ Food and Agriculture Organization. “But there could be a supply shock in terms of logistics, not being able to move it from point A to point B. This is something new and very difficult to predict. It’s that uncertainty that right now is the biggest danger.”

Farmer, retail and trucker groups in countries including Brazil, the U.S. and France are ringing the alarm over major disruptions that can develop from quarantine and lock-down conditions, along with the possibility of a labor crunch. Government officials in Australia, Germany and Kazakhstan are worried about strains amid panic buying and logistical hurdles.

A drawn-out crisis could lead to “real shortages” starting with fruit and vegetables before impacting staples, German Agriculture Minister said. 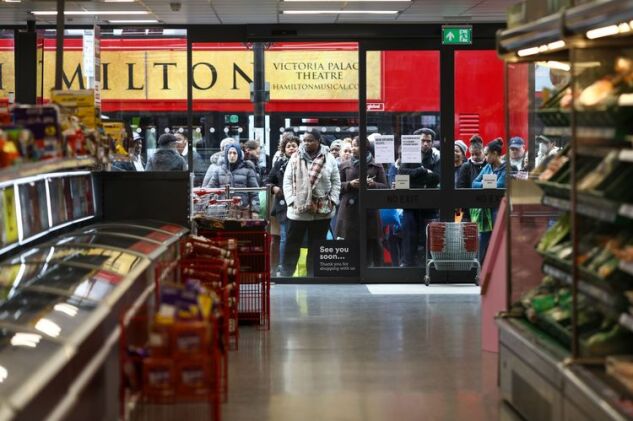 Shoppers wait on the street for the general opening of the store, during a time set aside for elderly and vulnerable members of the community to shop, at an Iceland Foods Ltd. store in London, U.K., on Wednesday, March 18, 2020.
Photographer: Simon Dawson/Bloomberg

For consumers, the fallout will vary depending on where in the world they are. In the U.S., it could mean your favorite brand of potato chips is out of stock, but basic staples like rice or bread are available. In countries dependent on food imports, the situation could be more dire.

In every part of the world, you’ll probably be paying more for food than you did just a few months, or even weeks, ago.

“It’s inevitable that you’ll see food prices go up,” said , chief executive officer of frozen-food company Saffron Road, who’s worked in the food industry for three decades. “This is unlike any crisis I’ve ever seen. If this continues for another two months or longer, the stress on food supplies is going to become more acute.”

At Saffron Road, which makes frozen entrees like chicken tikka masala and vegetable pad thai, Durrani has been increasing production for two months to beef up inventories in anticipation of a demand boom because of the virus. But even he didn’t expect to see sales explode as they have in the last several weeks as Americans rush to stock their homes and empty out grocery stores. Sales at key retailers have more than doubled in some cases, he said.

Meanwhile, the U.S. Department of Agriculture has safety inspectors at all manufacturing facilities. Employee temperatures are being checked to make sure workers with symptoms aren’t coming in, he said.

“We haven’t seen blow-back from that yet, but it could be impacted at some point,” Durrani said. “If you have a worker who wasn’t displaying symptoms come in and then it’s later confirmed they have the virus, then you have to quarantine all the workers they came into contact with. You could end up having to remove all the workers on a line.”

, an analyst at Rabobank, estimates that some U.S. meat companies are already seeing a 20% to 30% slowdown in processing lines as employees stay home to recover from illness or take care of family members.

There’s also the whole intricate way that food moves across the world, which is likely to be thrown off balance by port closures, government regulations and fears of contamination. Many countries have positioned agricultural production toward exporting a few key products, rather than for food sufficiency. That makes people within those nations more vulnerable if imports slow. Shipments of things like almonds into Italy have already been postponed.

The flip side is that in some instances a handful of countries, or even fewer, make up the bulk of exportable supplies of certain commodities. Disruptions to those shipments would have global ramifications. Protectionist policies could also take hold: Kazakhstan has the export of some food staples including buckwheat, sugar, potatoes and onions.

“If several countries start doing that, the market will go crazy,” Gloor said. “If, for example, France were to no longer supply wheat, that could cause a big disruption in all markets. If one country starts, others will follow, and then you really have a disaster.”

Vulnerability will also be heightened in those countries that had food problems even before the virus outbreak, Abbassian of the UN said, citing areas like sub-Saharan Africa. With currencies plunging against the dollar, some nations will also see their buying power limited. 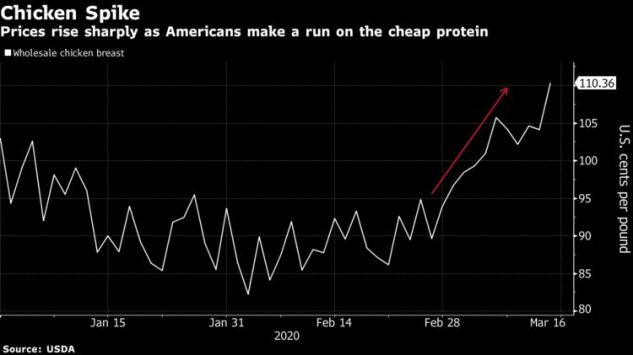 And of course, this is all happening against the background of climate change and the unpredictable weather patterns that have been wreaking havoc on global food production. Drought has already been hampering crop output this year in parts of Uruguay, New Zealand and Vietnam.

Matt Billings is a fourth-generation farmer in California. His operations at Billings Ranches go from grove to spoon -- harvesting almond crops, processing the nuts and manufacturing them into AYO Almondmilk Yogurt. Every part of that process is being impacted by the virus.

Workers on his 1,000 acres of almond groves can’t access enough of the face masks they use on a daily basis to protect against things like dust. Processing and manufacturing is starting to slow as worker absences creep up, and he expects that will likely get worse. In-person meetings with stores set up to market the yogurt have been canceled or postponed indefinitely.

“As farmers, we’ll figure out a way to get through this. But there’s probably a million different ways that this is impacting us, and we probably don’t even know the full extent of that,” Billings said. “Everything you think of as business as usual is just evaporating.”

To contact the reporters on this story:
in Denver at mmunshi@bloomberg.net;
in Chicago at ialmeida3@bloomberg.net