In the summer of 1988, Democrats nominated Michael Dukakis as their presidential candidate, the Soviet Union competed in its last Olympic Games, and the U.S. government filed a lawsuit to take control of the International Brotherhood of Teamsters.

Now, more than 30 years later, that oversight is about to end. Feb. 17 marks the close of an unprecedented effort to root out organized crime from U.S. labor unions.

Although immediate effects of the federal departure will be largely symbolic, it opens the door to potentially significant adjustments in how the Teamsters union investigates future corruption and how it conducts elections in 2026 and beyond. The union will no longer need written government approval to make disciplinary and election rule changes, although it still must notify the government of adjustments.

“February 17 will be a historic day for the Teamsters because we’re finally ending government interference in our union,” Teamsters President told Bloomberg Law. It’s the “capstone” of an era, he added.

The milestone is the result of a “Final Agreement” reached in 2015. It said that organized crime’s influence over the Teamsters “has long been expunged” and set a five-year timetable for the government to relinquish its role in union affairs.

At least 47 people were individually listed as defendants in the government’s case, ranging from union officials like Teamsters President Jackie Presser to mobsters such as Angelo “The Nutcracker” Lapietra and Carmine “The Snake” Persico.

The case was originally brought by U.S. District Attorney for the Southern District of New York —now an attorney for President Giuliani had investigated the Teamsters for over a year before filing the case under the Racketeer Influenced and Corrupt Organizations Act.

The union had made a “devil’s pact” with organized crime that had led to an extensive pattern of racketeering activity ranging from embezzlement to murder, the government’s lawsuit alleged. Hours before a trial was to decide whether the government could place the union into federal trusteeship, Teamsters officials and prosecutors reached a settlement that remained intact until the Final Order in 2015.

Despite initial widespread concern about the impact of a government takeover, there’s consensus that the union is now more open and democratic. But that could have been accomplished much faster without government involvement, Hoffa said.

“I don’t know about ‘positive,’” Hoffa said of how he would describe the oversight. “We should have done it ourselves. I was not here, and I would not have done it the way they did it because they left it so open-ended for such a long period of time. Whatever had to be done with regard to our union certainly didn’t need to take 30 years.”

But longevity aside, the union is more member-run than ever before, Hoffa said. One member, one vote became a facet of the Teamsters for the first time.

“It’s had an extremely wholesome effect,” said Ken Paff, a national organizer with the reform-minded Teamsters for a Democratic Union. TDU was founded in 1976 as a “grassroots organization” of union members advocating for more open elections and fewer contract concessions. It serves as a sort of opposition party within the union.

That’s a departure from criticism by organized labor leaders and politicians when the government’s racketeering suit was first filed. Even the TDU said at the time that government trusteeship wasn’t the answer to the union’s corruption.

“I have great difficulty in the trusteeship of an entire international union,” Sen. (R-Utah) told the New York Times in 1988. He was then the ranking Republican on the Senate Labor and Human Resources Committee. “I don’t think the government or any court in this nation is capable of being a trustee over a union.” 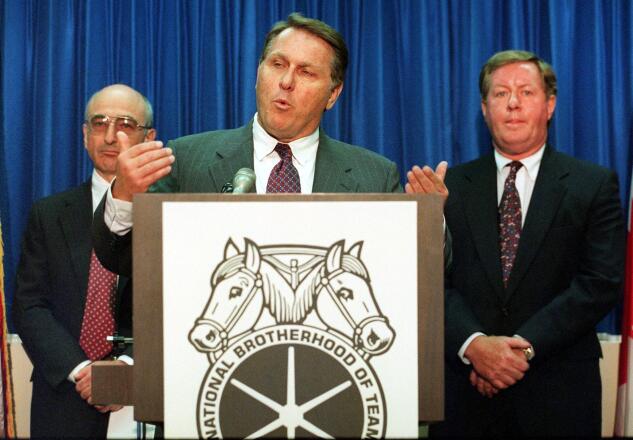 One Member, One Vote

Before the government-mandated reforms, most rank-and-file union members didn’t get a chance to vote for leadership. Teamsters’ officers were elected by delegates every five years; the delegates were appointed—not elected—by locals.

Now, union members elect delegates to the convention who then nominate candidates for a general election. Any candidate receiving more than 5% of the delegate vote appears on the general election ballot where every Teamsters member has a vote. The lower threshold allows TDU-aligned reformist candidates to appear in elections, according to labor historian and Penn State Harrisburg professor David Witwer.

“I think it was a good thing that they sued them,” Witwer said of the government’s involvement. “And then when they filed the suit, among the things they could change was changing the electoral process so that it was a direct vote, not a vote by delegates from local unions.”

The oversight also helped clean up mob links to the union. Before the government’s lawsuit, key members of the executive board were members of organized crime. Most locals were run honestly, but a handful were in cities where mobster corruption was “endemic,” according to Witwer.

Impact on the Future

An international election of Teamsters officers is scheduled for next year. Per the Final Order, the union can’t change voting procedures in that race but delegates will now be able to put a proposal before the 2021 convention that can alter the nomination threshold in future elections.

The prospect concerns the TDU, according to Paff. Its most recent candidate for international union president only received 8% of the delegate vote at the 2016 union convention but 49% of the vote in the general election against incumbent President Hoffa. If the nomination threshold had been 10%, there wouldn’t have been an opposition choice for president of the Teamsters.

“Our candidates in the South would not have been nominated if it was 10%,” Paff said. “They barely made the five. They overwhelmingly won the rank-and-file vote by 57%. So now you see that these are concerns for the future.”

Hoffa said “he’s sure that proposal would come up” to change nomination thresholds but it would be up to the delegates. He said he’d have to see a proposal before supporting or opposing it.