The International Brotherhood of Teamsters is on the verge of electing reform candidate Sean O’Brien as its new president, an outcome that would rebuke the once mighty Hoffa dynasty that reigned over the union for nearly four decades and attained a place in American folklore.

O’Brien held a commanding lead over Steve Vairma, an ally of outgoing President James P. Hoffa, with a vote margin of more than 2 to 1 as of late Thursday afternoon. O’Brien’s lead of 58,000 votes was more than the 25,000 ballots left to be counted, signaling he had all but won, though a winner won’t formally be declared until all ballots are counted.

In voting for O’Brien, the pugnacious leader of the Teamsters’ Boston local, members placed their trust in an anti-establishment firebrand to execute a colossal pledge to organize workers nationwide. This year, the 1.4-million-member union overwhelmingly approved a resolution to create a division dedicated solely to organizing the e-commerce giant. O’Brien would face the challenge of turning the theoretical pledge into tangible organizing gains.

From the start, O’Brien made his candidacy a referendum on the Teamsters’ current president. He painted Hoffa, the son of legendary Teamsters president Jimmy Hoffa, who disappeared in 1975, as a complacent bureaucrat uninterested in standing up for members—a label he attached to Vairma at every turn.

“I look at the Hoffa administration currently and Steve Vairma as one in the same,” O’Brien said at a debate in September. “When you disagree or have an original thought of your own, which is in the best interest of the members, you get punished, you get terminated, you get relieved of your duties, regardless of the job that you’ve done.”

The strategy appears to have worked. What was expected to be a close race became a landslide, with O’Brien drubbing Vairma, and international vice president at large, in every region of the U.S. where votes have been counted so far. The Teamsters select senior officers through direct election by members.

Spokespersons for both campaigns declined to comment until all votes were tallied.

Once an ally of Hoffa’s, the presumptive president-elect changed his tune in 2017 when Hoffa fired him as the top negotiator with United Parcel Service of America Inc., one of the Teamsters’ largest employers. Through an obscure procedural maneuver, union leadership later approved the larger collective bargaining agreement with the shipping company even though 54% of voters rejected the proposal. 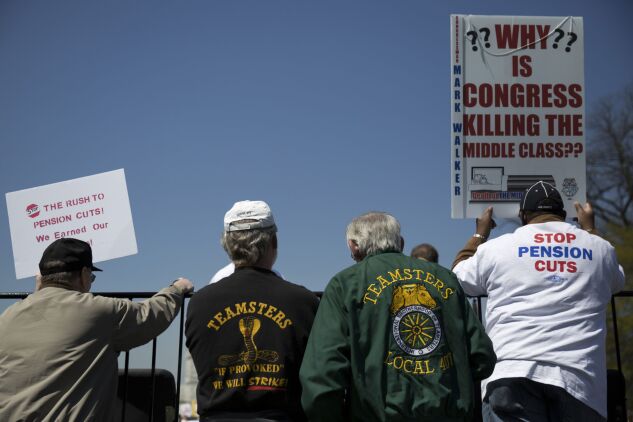 Teamsters members attend a rally in Washington, D.C., in April 2016 to oppose a plan by the Central States Pension Fund to reduce payments to retirees.
Photographer: Drew Angerer/Bloomberg

O’Brien would be the first Teamsters president in more than 30 years to take office without federal government oversight. Through a lawsuit, the U.S. Department of Justice took over the union in 1988 to root out its ties to organized crime, and federal oversight of the Teamsters ranks lasted until 2020.

In accordance with an agreement to release the union from federal oversight, an election supervisor oversaw the 2021 ballot count with independent observers from both campaigns at a warehouse in Alexandria, Va.

His apparent victory amounts to a takeover by Teamsters for a Democratic Union, an internal opposition group that calls for union leaders to oppose pension cuts and concessions to employers. The group arose in the mid-1970s to fight corruption within the union and was active in opposing the UPS contract in 2018.

O’Brien is no stranger to controversy himself. In 2013, before his split with Hoffa, he was suspended for threatening Teamsters for a Democratic Union members who ran for office in Rhode Island. The next year, five members of Local 25 were indicted on federal extortion charges. Four were acquitted by a jury, while the fifth took a plea deal in exchange for six months’ house arrest.

O’Brien would also face the test of helping the union recover from the pandemic. The Teamsters lost 9% of its membership in 2020.