Graduate student organizers are ending 2018 with a bang, obtaining union recognition from Columbia University, securing a final contract at The New School, and scrambling to respond to an election appeal at Grinnell College.

The flurry of activity—all in a two-week span—is indicative of college organizing in 2018: major victories alongside threatened or realized setbacks. Students are organizing to account for costs of living and securing pay equity and workplace protections, but schools are pushing back on the “adverse effects” unions could have on campus life.

Multiple representation petitions before the National Labor Relations Board were withdrawn in 2018 over fears the board would overturn an Obama-era precedent that permitted student workers to form unions.

Not all colleges are negotiating. That means the “struggle for justice and respect” will continue into 2019 at places like the University of Chicago, according to American Federation of Teachers President . A number of graduate student unions are AFT affiliates.

“This year, graduate employees showed their determination to have a real say over their teaching and learning conditions by joining the labor movement, despite a hostile National Labor Relations Board intent on gutting their rights,” Weingarten said in a statement. 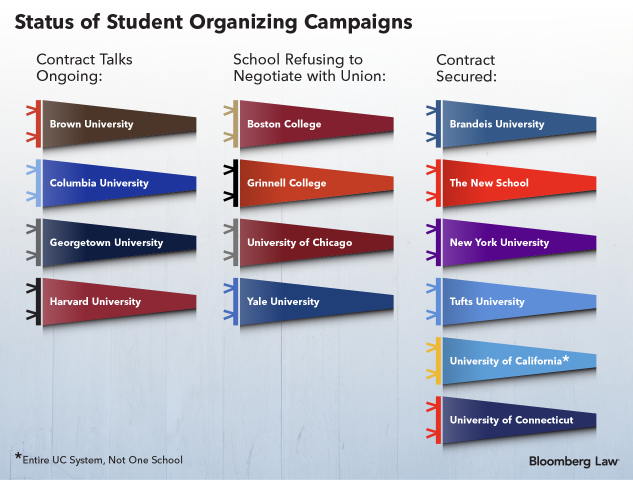 From Withdrawal to Recognition

Four union campaigns withdrew representation petitions before the NLRB in February, getting the year off to a shaky start for other hopeful organizers.

Students at Boston College, Yale, the University of Chicago, and the University of Pennsylvania ended formal unionization attempts in a period of two weeks, fearing that a Republican-led NLRB would seize the opportunity to overturn the pro-organizing precedent. All four colleges remain without graduate student unions.

The tides turned when organizers at Brandeis University secured a contract in August. The Service Employees International Union affiliate obtained wage increases and workload limits, among other gains.

The year ends on a cautious note for organizers. A union bid by undergraduates at Iowa’s Grinnell College threatens to give the NLRB the opportunity to revisit whether students can legally organize.

The Grinnell union used an NLRB election in November that created the country’s first undergraduate student union. But the school hired law firm Proskauer Rose to appeal the election and refuses to negotiate.

The college filed a 38-page request to invalidate the union the day after votes were certified. Lawyers accused student organizers of “duplicitous gamesmanship” and said a union would have “adverse effects” on campus life.

Unionization can be an answer to insecurity in turbulent times, something younger workers are after, organizers said.

“I think young people are realizing that unions are an important way to improve their economic situation,” The New School’s Dobson said.

Organizers at Boston College told Bloomberg Law that unionization seemed like the answer to variations in stipend money and an attempt to change insurance, among other things.

“Graduate workers are understanding that their conditions are not acceptable and not conducive to a strong learning environment for themselves or for their students,” BC organizer Ethan Farber said.

The trend in student organizing motivation and energy is likely to continue, UAW Region 9A Director Beverley Brakeman wrote in a statement to Bloomberg Law.

“University workers not just in the Northeast, but across the country continue to organize and work to join unions like the UAW because they do vital work that brings in tuition, funding and grants to higher learning,” Brakeman said.

Unionization fever may be spreading, but some are advising graduate student workers to be cautious before going all-in.

A union watchdog group asserted that the United Auto Workers, a union representing many graduate students, is tainted by recent corruption and won’t help students.

“The self-interested leadership” at the UAW will leave graduate students “sorely disappointed,” Center for Union Facts spokeswoman Charlyce Bozzello told Bloomberg Law in an email. CUF is a nonprofit headed by PR executive Richard Berman that, according to its website, fights for union transparency and accountability.

A UAW spokesperson said the union has “zero tolerance” of corruption and has instituted safeguards to prevent a situation like the one involving embezzled funds at a union training center.

A National Right to Work Legal Defense Foundation executive says that whether student assistants are primarily workers or students is legally ambiguous,

“If applying to a university is actually a job application that opens a massive can of worms for higher education about the legal relationship between students and schools,” foundation Vice President Patrick Semmens told Bloomberg Law by email.

“As long as we have a situation where grad worker voices aren’t heard,” students will unionize, she said.