“Selena the Stripper” has danced in Los Angeles-area clubs for about five years, which included a period marked by sharp drops in pay from fewer customers during the pandemic on top of stage fees eating into wages.

Unmet lap dance quotas have often left some exotic dancers in the red, and many say they’re forced to lose weight or even face race discrimination in the form of less desirable shifts. Increasingly complex employment agreements—thanks to new enforcement rules in California—could mean fewer hours for some.

Dancers also fear that they have little recourse if they are injured or harassed.

Selena, who asked to use a stage name to avoid retaliation, is among the dancers leading an effort to unionize strip clubs in the state in an effort to improve pay and working conditions.

“These clubs and major franchises don’t like the idea of workers taking over. It sets an example and shows what’s possible,” said Selena, the president of independent union Strippers United. “Strippers are treated like they aren’t valuable and they’ve internalized that. They don’t always see themselves as deserving of rights.”

The labor push in California comes against the backdrop of a mountain of litigation over wage and hour practices, harassment, and misclassification that led to multimillion-dollar settlements against clubs across the country. Several courts have ruled that strippers are legally employees under wage and hour laws, rather than independent contractors.

A California worker classification test, codified in 2019 as Assembly Bill 5, made it harder for companies to defend business models that rely on independent contractors.

But strip club operators, dancers, and attorneys told Bloomberg Law that neither the measure nor the litigation has caused sweeping change in the industry.

Now some say unionization is the best way to help dancers.

“The legislature can’t fix it because the legislature fixes things with such a broad brush and the issues in this industry are so narrow to this industry,” said Kevin M. Osborne, partner with Erickson Kramer Osborne LLP, a class-action boutique litigation firm in San Francisco. “The union could negotiate in their best interest without being subservient to these broad-brush labor laws but don’t necessarily provide the workers with what they need.” 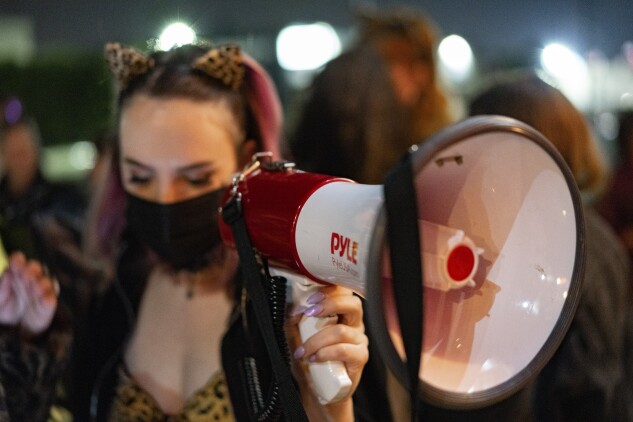 A stripper holds a megaphone during a protest over working conditions.
Photo by Brendan Lott via Strippers United

Strippers United, an independent union formed in 2018, first targeted Star Garden Topless Dive Bar in Los Angeles, where dancers have been picketing for weeks to push the owners to recognize the union.

Star Garden would be the first unionized strip club in the US since 1996, when strippers formed the Exotic Dancers Union at the Lusty Lady Peepshow in San Francisco. Lusty Lady, whose dancers organized under the Service Employees International Union, closed in 2013.

Lilith, who also asked to use her stage name to avoid retaliation, has been on the Star Garden picket line every week since March. She said she must sign a “lease agreement” that makes her a contractor and prevents her from earning an hourly wage. Instead, she gets in tips and splits payment for lap dances with the clubs.

Lilith loves stripping but has felt unsafe at times. She performed with broken glass in the lap dance area and later pulled a shard from her heel, and knew of another dancer who cut her foot.
Another time a drunken customer picked her up and she couldn’t get him to put her down.

But it was the firing of two coworkers who complained about safety issues and unruly customers that sparked the petition and pickets, Lilith said.

“We all had our own individual experiences, where customers crossed our boundaries and security did not intervene and we were left to deal with it on our own,” she said. “Those things were really what activated us.”

Ryan Carlson, CEO of Deja Vu Services Inc.—one of the largest strip club operators in the US—said seven of his clubs in California became unprofitable and were forced to close after being required to classify dancers as employees. Dancers at the remaining clubs only get part-time shifts, he said.

“Professional entertainers want to go home with cash and set their own hours,” Carlson said. “The employment model can’t offer that because a club can’t function with massive overtime, unpredictable scheduling, and a slew of other impracticalities that arise.”

“Moreover, an average dancer under the employment model still earns over $50 per hour, which is more than most educated professionals,” he said. “It will be interesting to see how quickly a dancer union can drive a club into bankruptcy.”

Class actions have produced court wins and large settlements in California and elsewhere, including in Ohio, New York, Florida, and Nevada. The California Labor Commissioner also is investigating, according to documents obtained by Bloomberg Law, a string of complaints alleging clubs in the state failed to pay wages and made unlawful tip deductions between 2019 and 2022.

But large-scale wage and hour, harassment, and misclassification cases filed by strippers plateaued in 2019, said Manny Starr, an attorney with the Frontier Law Center who has represented dancers. It would be unusual at this point for there to be another suit against a big operator, and the cases involving smaller clubs are more difficult to find, he said.

“I believe these individual cases exist, and they are probably having their rights violated, but it doesn’t draw the attention of the big class-action guys,” Starr said of the plaintiffs-side firms that would traditionally take on such cases.

But few lawyers are willing to step up because of concerns for personal safety, small damage amounts, or too few dancers for a class action, he said.

Selena of Strippers United, who frequently talks to strippers in the state, said A.B. 5 likely made things worse. Dancers are required to sign restrictive contracts that consider them partial club owners, or they receive so few hours as employees they can’t make enough money from their shifts.

“You have to work doubly hard, and a lot aren’t making quota with the pandemic. And post-pandemic, wages slumped and money wasn’t what it was like before,” Selena said. “Dancers are suffering and really struggling under the burden of it.”