Auto-participation tools enacted over a decade ago are keeping retirement savers from losing it during the global pandemic, financial professionals told Bloomberg Law.

The coronavirus outbreak has decimated stock values and job markets the world over, sapping resources, alternatives and time from shell-shocked investors.

While some 401(k) balances shrank by as much as 20% during the first weeks of the health care crisis, retirement advisers are encouraged by the fact that most routine contributors aren’t cashing out to the extent Congress allowed in the $2 trillion stimulus law.

“We’re not seeing a wave of $100,000 distributions,” Nathan Voris, senior managing director for Schwab Retirement Plan Services, said of the emergency withdrawal requests received to date from financially distressed individuals. Schwab staff said less than half of 1% of participants it serves have pulled out, on average, around $30,000 for virus-related relief.

That’s higher than the average virus-related distribution ($25,000) Prudential Retirement president Yanela Frias said her company has paid this spring. Prudential staff said the median withdrawal by the less than 1% of those who’ve asked is closer to $12,000—stressing that the majority of participants “have not had to access their retirement savings to meet near-term cash needs.”

That’s proof, retirement professionals maintain, that the behavioral nudges included in the Pension Protection Act of 2006 are working. Some of the administrative tweaks that plans are incorporating more regularly include auto-enrollment and auto-escalation, which default employees into work-sponsored retirement programs rather than waiting for them to sign up and gradually increase their annual contributions, respectively.

Before the pandemic, House Ways and Means Committee Chairman Richard Neal (D-Mass.) was working on growing the ranks of dedicated long-term savers via another bundle of corporate tax breaks designed to spur the creation of more automated retirement programs. The flip side is that when tragedy strikes, lawmakers typically loosen access to retirement assets—making the accounts more like piggy banks than lockboxes.

A June 2019 report from investment firm Vanguard illustrates how quickly auto-enrollment has spread through the 5 million participants and $1.4 trillion in retirement assets it manages. 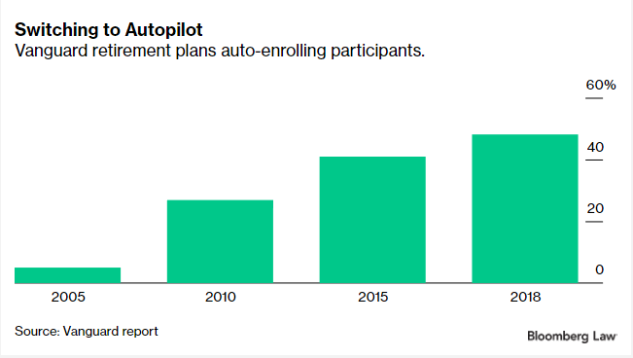 The penetration rate is even higher for new hires.

Vanguard reports that 66% of new contributors in 2018 were swept into coverage via auto-enrollment. The auto-piloting of retirement preferences builds from there, with two out of three Vanguard plans that use auto-enrollment also employing auto-escalation to bump up payroll deducted-contributions over time.

That formula, along with other automated options such as defaulting employees into diversified funds and offering self-adjusting target date funds that invest more conservatively as retirement age approaches, has stoked participation gains.

Vanguard reports that 91% of employees auto-enrolled into their plans contributed in 2018, versus the six in 10 employees who paid into plans with voluntary participation.

“It’s a routine. You’ve set it,” she said of the stay-the-course mentality involved in modern plan design.

Her research shows that automation is paying dividends. Respondents told ICI that: employer-sponsored plans help them “think about the long-term, not just my current needs” (90%); payroll deductions make it “easier for me to save” (90%); and “knowing that I’m saving from every paycheck makes me less worried about the short-term performance of my investments” (82%).

Automation doesn’t supersede awareness, according to Holden. She said account holders notice market volatility but also understand “the long-term goal” and the “little-by-little of it.”

Still, it’s not a panacea.

John Scott, director of the Pew Charitable Trusts’ retirement savings project, said low-income earners whose idea of financial security is making it to the end of the week remain wary of “waking up one day and seeing they got less money in their paycheck.”

“If you’re living on the margins, you might need that 5% to 6% more than getting the employer match,” he said.

In its latest annual survey, the Plan Sponsor Council of America reports that 60% of the 600 respondents representing the trade group’s membership said they offer retirement plans with auto-enrollment.

Prudential’s Frias said boosting accessibility to retirement plans remains a work in progress, with larger employees more inclined to shoulder the burden while companies with under 100 employees continue to have reservations. Some of the hang-ups Frias said small businesses have shared with Prudential include: fiduciary responsibility, administrative duties, and cost.

Overcoming individual’s reluctance to participate in workplace plans is a separate challenge, according to Frias. Prudential has developed emergency savings accounts linked to work-sponsored retirement programs that participants could dip into to cover immediate costs (rent, groceries, medical bills) instead of raiding their nest eggs.

Schwab’s Voris said anything that helps workers build a better future is worth exploring.

“The real trick is removing the barriers to becoming a financial saver,” he said. “It’s getting them to take that next step. And sometimes that’s not a 401(k).”

“Whether you are offered a plan has a lot more to do with your coworkers than who you are,” he said. His tax filings-based research indicates that higher-earning career personnel historically get more out of deferred compensation programs than seasonal help.

“The system is actually doing better than some would lead you to believe,” he said.

EPI’s Morrissey disagrees, arguing that retirement savings-draining market dips “have shown everyone how risky this is.”

She’d rather see a strengthening of the social safety net.

“Everybody should be paying more into Social Security,” she said of the government-run insurance program born out of the Great Depression.