Nondisclosure agreement restrictions in Washington state might be the nation’s broadest after recent revisions—as NDA bans spread and expand beyond their original scope nearly five years after the #MeToo movement spotlighted sexual harassment and assault.

California first enacted a law in 2018 banning employers from imposing contracts that prevent employees from talking about their claims of workplace sexual harassment or assault. Fourteen other states have since passed similar restrictions on private-sector employers.

The measures began in response to public revelations that Hollywood movie producer Harvey Weinstein and other high-profile actors and business executives used nondisclosure pacts to keep quiet the sexual misconduct claims against them.

Several states now impose a broader ban on nondisclosure agreements covering all forms of workplace discrimination and harassment—including California, which revised its law in 2021, and Maine, where a new law is set to take effect Aug. 8.

Washington lawmakers raised the bar yet higher this year, banning NDAs related to all forms of workplace discrimination as well as wage and hour violations and conduct that is “recognized as against a clear mandate of public policy,” effective June 9.

“The Washington law is beyond what folks were sort of used to seeing in response to MeToo,” said Catharine Morisset, an employment attorney with Fisher & Phillips LLP in Seattle.

Covering wage and hour claims is novel among state NDA restrictions, she added. The language about public policy mandates is also unusual, and she said it appears to be aimed at the tort claim that’s available for wrongful termination under Washington law.

“It’s important that we recognize that harassment does not exist in a vacuum. It often happens alongside other forms of discrimination like wage and hour violations,” said Andrea Johnson, state policy director for the National Women’s Law Center. “It’s really heartening to see a law that recognizes that.”

The legislatures in Hawaii and Oregon also passed measures this year to broaden their NDA bans. And as the state restrictions continue to spread, there’s momentum in Congress for bipartisan legislation to set nationwide limits on the use of nondisclosure agreements—an effort boosted by former Fox News anchor Gretchen Carlson, whose policy group helped enact a ban on mandatory arbitration for #MeToo-type claims earlier this year. 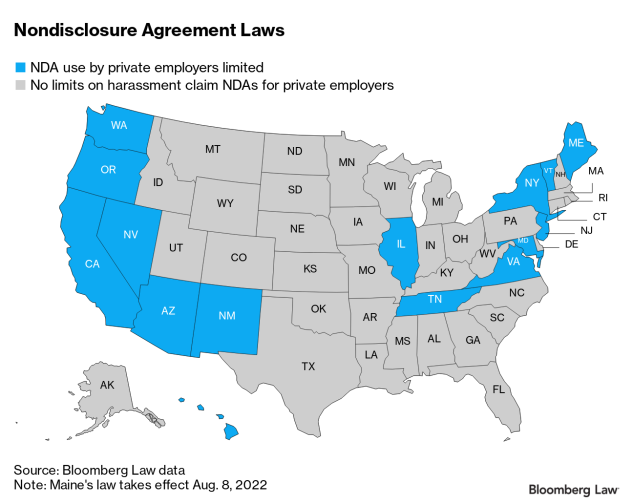 As states broaden the types of claims covered by NDA restrictions, they’re also expanding the universe of contracts covered.

The first wave of state nondisclosure laws generally banned employers from requiring employees to sign a nondisclosure agreement as a condition of employment. The newest laws, including the revisions passed this year in Hawaii and Washington, also largely ban the use of NDAs for settlement agreements. Others, such as Oregon, allow NDAs in settlements but only if the employee requests the nondisclosure language.

The Hawaii measure is awaiting Gov. (D), who is expected to sign it or let it become law, after omitting it from the list of potential vetoes he provided the legislature last month.

“State legislators are working and in some cases coming back and further working like they did in Washington to really put survivors in the driver’s seat to have agency about whether they talk about what happened to them or don’t talk about it,” Johnson said. “This is an area of policy that is kind of ever evolving.”

The measure allows the use of NDAs in settlements related to workplace discrimination claims—including sexual harassment—but only if the settlement “expressly provides for separate monetary consideration” for the nondisclosure provision in addition to any other compensation. The agreement also must include a notice that the provision doesn’t bar the employee from testifying or providing evidence to a federal or state agency investigation or court proceeding.

Even without a strict ban on NDAs in settlements, limits like those in the Maine law can discourage employers and employees from reaching a settlement and prolong the process of resolving claims, said Peter Gore, executive vice president for the Maine State Chamber of Commerce, in written testimony to the legislature.

“Resolution of disputes is a good thing, and it is easier to resolve matters, often for everyone, if there is confidentiality,” Gore wrote. “Without resolution, the parties continue to be adverse, costs for both sides rise, and the company often cannot take corrective measures for fear of incriminating itself.”

The National Women’s Law Center encourages states to leave workers the option to request nondisclosure language in settlement agreements, as Johnson told Maine legislators when testifying on their bill earlier this year.

“We hear from some survivors that they want that guarantee of confidentiality. It can also be a bargaining chip in settlement negotiations. We don’t want to take chips away from the employee,” Johnson added.

But she acknowledged employers sometimes find ways to take advantage of that permissive approach and coerce employees into a nondisclosure pact as part of a settlement.

“It’s kind of trying to walk the line” so employees have the power to decide, she said.