A building is damaged after an explosion at a northwest Houston manufacturing business, on Jan. 24. The explosion killed two workers.
Photographer: MARK FELIX/AFP /AFP via Getty Images

A fire at a gas well Jan. 30 that killed three workers is at least the seventh incident in the Houston area since mid-2018 to trigger a probe by the U.S. Chemical Safety and Hazard Investigation Board, a marked increase in scrutiny by the agency.

The CSB has deployed investigators to the region seven times since 2018 compared with roughly once per year between 2016 and 2018, according to the agency’s website. Investigators attribute the spate of fires and explosions to aging refineries, the sheer number of chemical companies in operation, and companies’ increasing leeway to self-regulate.

“There are certain issues we’ve seen over and over again,” said Kristen Kulinowski, interim director of the CSB, acknowledging refinery age as a contributing factor in the recent increase in the frequency of fires and explosions in Texas. “Some refineries are over 100 years old,” Kulinowski said in an interview, adding that the agency commonly recommends companies ensure plant maintenance is up to date.

Most of the incidents the CSB is investigating occurred at petrochemical refineries or at their vendors in 2019 and early 2020.

For example, a fire and explosion at the TPC Group Inc. plant in Port Neches on Nov. 27, 2019 forced 50,000 people to evacuate the area, about 90 minutes from Houston. Three workers were injured in the incident.

Also in 2019, explosions and chemical releases at a KMCO LLC chemical plant in Crosby; an refinery in Baytown; and an Aghorn Energy facility in Odessa gained national attention and prompted the CSB to launch probes.

The CSB investigates the causes of disasters and issues recommendations to other federal agencies, companies, and the public to reduce the risk of future accidents, but it has no enforcement authority. And this week the agency will lose its quorum when board member Rick Engler’s term ends.

“Our goal is to complete these investigations in a timely manner and provide valuable safety information to industry, communities and workers in an effort to prevent future events,” said Hillary Cohen, a spokeswoman for the CSB. 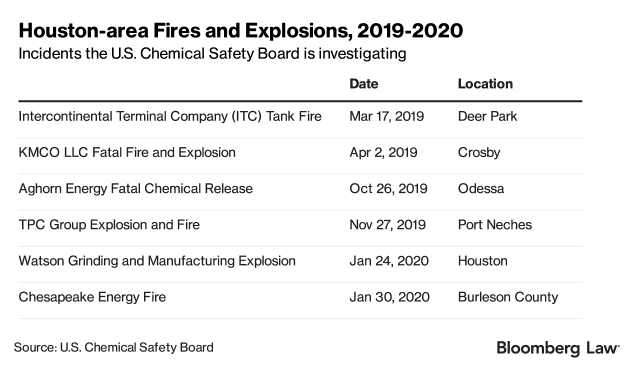 Harris County, which includes much of the Houston oil and gas industry, filed suit against ExxonMobil on Aug. 1, 2019 after a fire at the company’s Olefins Plant in Baytown released unauthorized emissions of propylene, LPG, propane, and other combustible products, violating several provisions of the Texas Clean Air Act as well as the state water code, the county said in court documents. The CSB didn’t investigate that incident.

Rock Owens, Harris County’s special assistant county attorney for environmental matters, said easing enforcement from Texas regulatory agencies, budget cutbacks, and a pro-business outlook in the state capital “have created a laissez-faire attitude regarding business operations. We have a kind of a self-regulated industry here and that doesn’t help, either.”

Workers also are filing safety lawsuits against companies as a result of the wave of recent incidents.

The frequency of explosions “has blown my mind,” said Benny Agosto Jr., a plaintiff attorney at Abraham, Watkins, Nichols, Sorrels, Agosto & Aziz. “We see two or three in a year, or one major event—but in the past two years or so, there have been so many fires and explosions.”

Agosto, who also heads the Houston Bar Association, is representing at least 14 workers in a case against KMCO, filed in April 2019, related to the blaze at the chemicals blending facility in Crosby. One worker was killed and two others injured. The explosion happened when a transfer line carrying the flammable gas isobutylene ignited and spread to a nearby warehouse. The CSB probe of that incident is ongoing.

Most recently, the family of a worker killed in an explosion at a Watson Grinding and Manufacturing facility in the Houston area in January filed suit against the company, seeking monetary damages, a restraining order to prevent the potential destruction of evidence, and a request to inspect the premises. The CSB is also investigating that incident.

The seventh CSB probe to be launched since mid-2018 stems from an explosion at a Kuraray America chemical facility in Pasadena, Texas, in May 2018 that injured 21 workers.

Greg Dillard, a safety, environmental, and crisis management attorney with Baker Botts in Houston, represents companies after disasters. He said companies’ greatest fear is the possibility of criminal prosecutions against management and companies themselves.

“U.S. Attorney offices have been bringing enforcement actions against KMCO and ITC and others, but also single-person fatality cases are being brought from a criminal enforcement perspective now,” Dillard said in a phone interview. “So companies are very aware of the increased scrutiny and increased regulatory enforcement concerns.”

In April 2019, a Texas grand jury indicted Arkema executives on assault charges, alleging they downplayed the dangers of a fire that injured two emergency responders.

Owens said his office is becoming more aggressive about bringing charges against companies after major incidents.

“There is definitely a move in that direction, and I hope companies are freaked out,” Owens said.