’s shortage of workers overlapped with storms and an air traffic control interruption to force cancellation of nearly 3,100 flights over four days, the carrier’s next chief executive officer said as he extended an apology to customers.

The Dallas-based carrier was particularly because as much as 50% of its daily lines of flight -- or where a plane travels from the start of the day to the end -- touch Florida, Executive Vice President said in an interview. Bad weather and the traffic interruption in the area left Southwest with zero arrivals and departures in some cities for a time Friday, he said.

“Crews were struggling to move and you end up in short order with aircraft and crews in the wrong spot,” Jordan said. “It’s really difficult to repair and put those things back together.”

Nearly 950 flights were canceled Saturday, followed by almost 1,500 on Sunday, according to FlightAware, an online tracking service. Southwest canceled 17.3% of its flights Oct. 8 through earlier Monday, compared with about 2.6% at American Airlines Group Inc. and less than 1% at both United Airlines Holdings Inc. and Delta Air Lines Inc.

“People have plans and we caused a lot of disruption and I apologize for that,” Jordan said. “It’s never what we want to do.”

As customer outrage grew, speculation over the cause swelled. Southwest pilots refuted claims that they were staging a sickout over Covid-19 shot mandates, and Republican Senator issued a call via Twitter to “stop the madness before more damage is done.” No Southwest employees staged a job slowdown or sickout as part of the problem, Jordan said.

The carrier needs to build more of a “staffing cushion” for unexpected disruptions, Chief Operating Officer told employees in a video Sunday night. If it’s needed to resolve the problems, Southwest is willing to cut its flight schedule in November and December beyond the reductions it already made in the final four months of the year, he said. 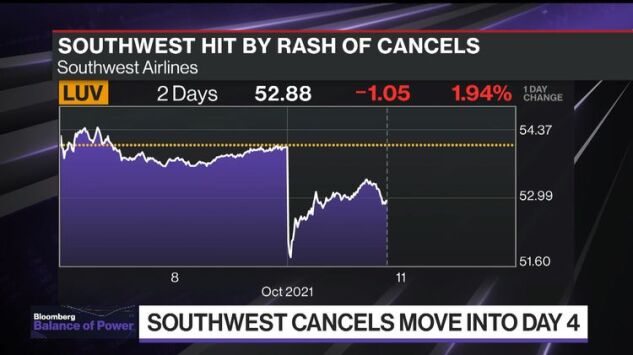 “I wish I could tell you that we are out of the woods, but I cannot,” Van de Ven said. “The environment for our entire industry remains fragile.”

Southwest has hired about half of the 5,000 workers it wants to add before year-end, CEO-designate Jordan said.

Southwest’s weekend issues are a repeat of the delays and cancellations over the summer that led to frustration among travelers and crews. Other airlines also faced scheduling issues this summer, including and , but Southwest’s problems have persisted into the fall.

Southwest has “a very aggressive hiring plan and is seeing a consistent stream of new hires come on board,” Van de Ven said. “We are still not where we want to be with staffing, and in particular with our flight crews.” 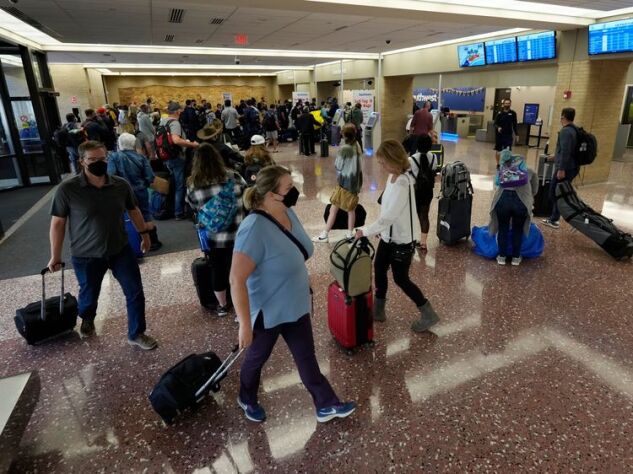 Passengers queue up at the Southwest Airlines counter at Eppley Airfield in Omaha, Nebraska, on Oct. 10.
Photographer: David Zalubowski/AP Photo

Southwest fell 4.2% in New York trading Monday and has risen about 11% so far this year.

Pilots weren’t part of the weekend problem, Casey Murray, president of the , said in a statement.

“I can say with certainty that there are no work slowdowns or sickouts either related to the recent mandatory vaccine mandate or otherwise,” Murray said in a statement. Under federal law, “our union is forbidden from taking job action to resolve labor disputes under these circumstances. SWAPA has not authorized, and will not condone, any job action.”

The union on Oct. 8 asked a court to temporarily block Southwest from carrying out federally mandated coronavirus vaccinations until an existing lawsuit over alleged U.S. labor law violations is resolved. The airline has set a Dec. 8 deadline for the shots, which the pilots claim “imposes new conditions of employment” and threatens termination. Southwest has denied that any recent changes related to Covid-19 require negotiations with the union.

SWAPA has threatened to protest publicly during the upcoming winter holidays if scheduling issues at the carrier didn’t improve. Flight attendants and ground workers also complained about excessive overtime.

“What was a minor temporary event for other carriers devastated Southwest Airlines because our operation has become brittle and subject to massive failures under the slightest pressure,” Murray said Sunday. “Our pilots are tired and frustrated because our operation is running on empty due to a lack of support from the company.”

In a statement Sunday on Twitter, the Federal Aviation Administration said that severe weather and limited staffing in its Jacksonville center contributed to delays and cancellations on Friday.

The Jacksonville Center handles high-altitude traffic over northern Florida and other nearby states. ’s largest hub in Atlanta and American Airlines Group Inc.’s hub in Miami fall into the region of heavy traffic through the center’s airspace.

However, thunderstorms across parts of the East Coast and Midwest caused greater disruptions, according to a log of FAA air-traffic advisories.

“Disruptions to Florida quickly spread throughout our network given our point-to-point flying,” Van de Ven said. “Add to that, we have significant crew base resources in Florida, and any disruptions in our flight activity there would prevent us from injecting those crews into our system.”

The airline had ramped-up flights earlier this year to meet surging domestic demand, but was forced to its schedule for the last four months of 2021 due to staffing issues. More than 99,000 Southwest flight arrivals were delayed from June through August, in part because of worker shortages.

Southwest has struggled to hire the workers it wants to add this year. It’s facing competition from other industries, particularly for entry-level workers. It wants to hire 25,000 employees over three years.

(Updates with comments from CEO-designate Jordan starting in first paragraph)

To contact the reporters on this story:
in Dallas at maryc.s@bloomberg.net;
in Washington at alevin24@bloomberg.net