Significant EEOC policy changes that would align with Biden administration priorities are in a holding pattern while Republicans maintain a majority on the agency’s leadership panel. But day-to-day decisions over which lawsuits to pursue have largely avoided partisan gridlock because of GOP Commissioner Andrea Lucas.

U.S. Equal Employment Opportunity Commission Democratic Chair is unlikely to press for substantive regulatory actions and other moves while three out of five commissioners are Republicans, agency watchers said. That means delays on rules for employer wellness plans that have taken on heightened significance during the Covid-19 pandemic, on sexual harassment guidance that’s been in limbo since 2017, and on pushes for employer pay data reporting—an issue President Joe Biden has highlighted.

Despite the unusual leadership makeup, the agency nevertheless continues to file discrimination lawsuits, with the commissioners unanimously agreeing 40 times since October 2020 to sue an employer or file a friend-of-the-court brief in a private litigant’s case, according to a Bloomberg Law analysis of EEOC voting records.

Lucas has emerged as the deciding swing vote in 37 split 3-2 decisions on litigation and other agency actions out of a total of 135 votes between Oct. 26, 2020, when Republicans gained the EEOC majority, and Nov. 30, 2021.

Lucas—who previously worked with , the labor secretary during the back end of the Trump administration—has sided with Democrats 12 times in those split votes, all involving litigation, Bloomberg Law’s analysis shows. December 2021 votes have yet to be released publicly. 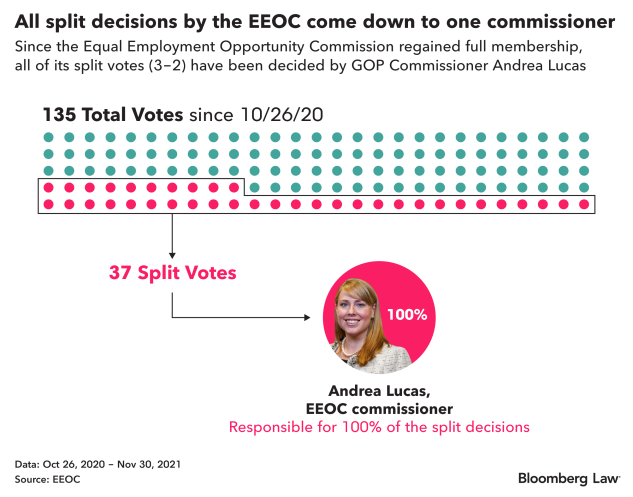 Attorneys disagree over how partisan the agency is, but the EEOC is typically seen as dealing with contentious issues in a bipartisan manner.

“Everyone that is on the EEOC is firmly committed to eradicating harassment, discrimination, retaliation,” said Jonathan Segal, a partner at Duane Morris LLP in the employment, labor, benefits and immigration practice group. “Where there may be differences is what a commissioner believes meets a definition of discrimination, harassment, or retaliation, or strategically where they think it’s the right case to bring.”

Burrows told Bloomberg Law the commission has had a long tradition of bipartisanship.

“I remain firmly committed to continuing to engage with my colleagues on both sides of the aisle to promote equal employment opportunities for all workers,” she said. “Although we may not always agree, my goal is to reach consensus whenever possible.”

Of the 135 total votes taken by the commission since October 2020, 94 were unanimous, according to Bloomberg Law’s review. That includes the 40 unanimous votes on litigation issues.

Twenty-seven of the 37 votes that had a 3-2 split involved litigation, with Lucas joining her Democratic colleagues 12 times to bring cases that include the EEOC’s first pandemic-related telework lawsuit and litigation against a pharmacy that allegedly discriminated against an employee with asthma who asked to wear a face mask at work to help protect him against Covid-19.

“I value my conversations with Commissioner Lucas and appreciate her votes to approve some of the litigation matters that have been brought before the Commission,” said Commissioner Jocelyn Samuels (D). " I look forward to continuing to work with her and all of the Commissioners to find areas of consensus as we work to fulfill EEOC’s mission.”

Lucas sided with her fellow Republicans on 15 occasions to block litigation. The agency’s website provides scant detail on these cases.

“There is still a lot of important work that I believe can be done on a bipartisan basis, from more COVID-19 guidance to updated guidance on harassment, pregnancy, and caregiver discrimination to rules related to wellness programs, among other topics, and I hope that we will continue to work together on these and many other issues,” Lucas told Bloomberg Law in an email.

Lucas has also worked with other commissions on bipartisan actions addressing the pandemic and resolutions condemning antisemitism and violence against Asian Americans and Pacific Islanders.

The EEOC publicized commissioner votes, and expanded the types of lawsuits that require panel approval, during the Trump administration. “I am pleased that the public now has access to this important information on the Commission’s actions,” said Commissioner Janet Dhillon, the agency’s former Republican chair.

The EEOC “shouldn’t be partisan,” said Elena Baca, global chair of Paul Hastings LLP’s employment law department. “You’re going to have different functions of the government that will reflect the priorities, perhaps, of a given administration. But when you actually look at how the EEOC operates, once you get out to its different offices, you really don’t see wild swings.”

Still, partisanship can and does rear its head at the agency. Last year, the agency failed to publish a regulatory agenda twice because of commissioner disagreements—for the first time in more than 25 years.

A vote on the agency’s strategic enforcement plan, which sets its litigation and other priorities, is expected in the fall, EEOC spokesman Victor Chen said. The vote would take place after Dhillon’s term expires in July 2022.

“All politics is partisan,” said former EEOC General Counsel Ronald Cooper, who was nominated by President George W. Bush. “And if there was ever a place where there’s partisanship, it’s going to be at EEOC, because it’s one of the most contentious set of issues you could possibly imagine.”

Larry Lorber, labor and employment counsel at Seyfarth Shaw LLP, said he doesn’t expect major policy action from the EEOC on wellness regulations and harassment guidance until the makeup of the commission changes.

Bloomberg Law’s analysis found that, of the 37 total split votes by the commission, the majority were over disability discrimination cases and policy issues—such as signing a memorandum of understanding with another agency or holding a closed meeting.

The Americans with Disabilities Act has gotten increased attention from the EEOC and attorneys during the pandemic with the development of long-haul Covid-19 and debates over telework accommodations, among others.

“The fact that the majority would be ADA-related is not surprising, just simply given their priorities and what they’ve articulated to be their priorities, and then the overlay of COVID,” Baca said. 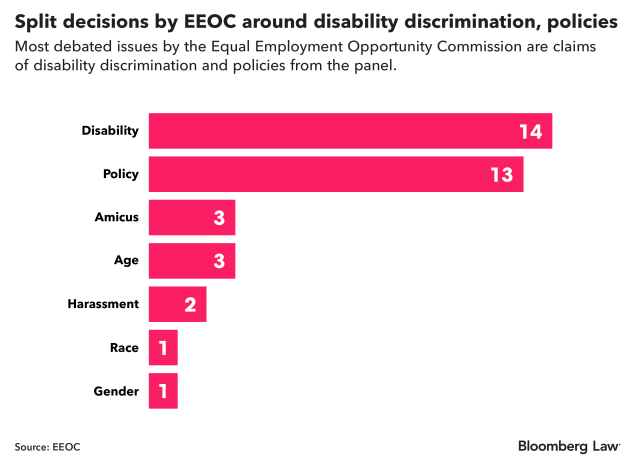 Lucas also has a particular interest in disability law.

“Far too often, it seems that disability rights are seen as second-class rights by companies and disability diversity is seen as an afterthought,” Lucas said. “The ADA is not a partisan statute. But the law is complex and so are the facts in many of the ADA cases that come before the Commission. Where the law and the facts are complex, there can be reasonable disagreement.”

Commissioners often vote based on how they interpret the law or how they think the EEOC should be interpreting or enforcing it, Baca said.

“That’s where Commissioner Lucas is the deciding factor,” Segal said.

Lucas said she approaches every matter with the same end goal—"determine the right answer under the law and whether it is appropriate to exercise the weight of the federal government in the matter at hand.”

Lucas being the standout vote on the commission led to mixed reactions from attorneys.

Lorber said if he expected any Republican commissioner to be the swing vote, he would’ve predicted Commissioner Keith Sonderling (R). “I believe he’s been more active in outreach and trying to get a better sense of where the employer world is heading. And by doing that, you’re going to be moving more towards the center,” he said.

Baca said Lucas made sense as the deciding vote. “I don’t know that I’ve ever heard her described as someone who is an ideologue. I think that more likely than not she is looking at each of these situations and coming to a decision, that it’s not partisan.”