A union member stands near Scabby, a giant inflatable rat that is a well-known symbol used by protesters.
Photo by Juana Arias/For the Washington Post

A rat bigger than even the rodents of New York City is the linchpin of a case that may prompt the U.S. labor board to reinterpret how, when or even if certain union protests are protected by labor laws and the First Amendment.

A dispute out of Philadelphia involving Scabby the Rat, an inflatable protest icon used by unions for decades, is finally before the four current members of the Republican-controlled National Labor Relations Board, following a lengthy effort by agency general counsel Peter Robb to find a case that could be used to get use of the rat outlawed.

To Robb, the rat is so confrontational that its use amounts to unlawful coercion when employed to protest businesses other than those directly involved in a labor dispute with a union. The National Labor Relations Act prohibits unions from engaging in “secondary picketing” or other actions meant to coerce a neutral employer.

More consequentially, the general counsel is also arguing that speech in labor disputes has only limited First Amendment protection, and that the government can justify stronger regulations on what unions can say or communicate. It’s a politically fraught topic that is almost certain sure to draw legal challenges.

“The fact that the NLRB is trying to change it underscores what a powerful symbol the rat has come to serve as,” said Katie Fallow, a senior staff attorney at the Knight First Amendment Institute. “If the rat didn’t have any impact, it wouldn’t be paying attention. And that makes its actions a little more suspect.” 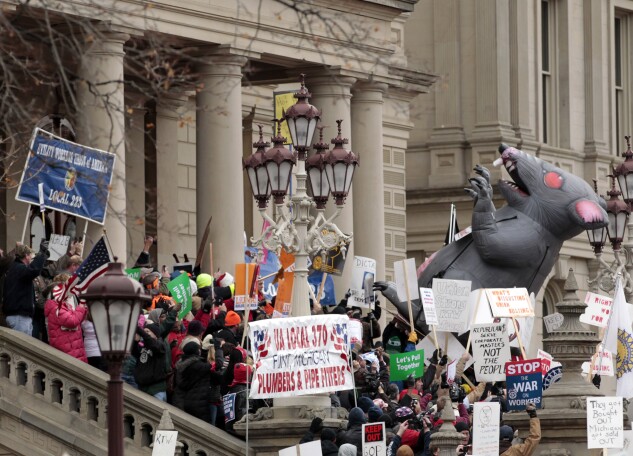 Demonstrators carry Scabby the Rat during a protest outside the Capitol building in Lansing, Mich.
Photographer: Jeff Kowalsky/Bloomberg via Getty Images

When last faced with the question of the rat’s legality in in 2011, a Democratic majority of labor board members said the Scabby balloons aren’t coercive. They also said any limit on a union’s use of those and other symbols could “raise serious problems under the First Amendment.”

Outside of a labor context, the use of an inflatable rat in protest would be “absolutely protected,” Fallow said.

But the NLRB now seems to be saying that the combination of picketing as a means, unions as a speaker, labor as a topic, and the secondary dimension creates a separate category of expression, said Cynthia Estlund, a labor and employment scholar and law professor at New York University.

A federal judge on June 19 denied the general counsel’s against a union using the Scabby inflatables in a separate case from New York’s Staten Island.

The case before the board began on the morning of June 26, 2018, when members of the International Brotherhood of Electrical Workers Local 98 showed up at the Fairfield Inn in Philadelphia’s Center City.

The union members set up a 12-foot high inflatable rat between the entrance of the hotel and the Libertine, the hotel restaurant.

“The rat, which had red eyes, sharp black extended claws and a scabby stomach, towered over the windows of the Libertine and anyone who happened to be near it,” an NLRB lawyer in the general counsel’s office wrote in a brief.

Although the union was protesting the hotel and Wankawala Organization, its primary dispute was with electrical contractor Tri-M Group LLC, which hired nonunion workers, according to the NLRB general counsel.

The union returned multiple times with varying inflatable rats placed in differing locations. At one point, the union brought a bullhorn and engaged in a three-hour evening protest.

The general counsel’s office said in its brief that the IBEW’s protest went beyond attempts to pressure the hotel owner to use union labor and pay certain higher wages.

Its conduct suggested to the public “that the Fairfield Inn is a poor business unworthy of consumers’ patronage.” The board should find a violation of the secondary picketing rules because union officials moved the restaurant’s tables to make space for the rat on the sidewalk and were pacing back and forth passing out their handbills.

The “totality of Respondent’s confrontational and disruptive activity crossed the line from legitimate communication to unlawful coercion,” the general counsel argues.

An NLRB administrative law judge said the “excessively loud” talking over a bullhorn was coercive. Putting up the Scabby balloons, however, was legal under current board precedent, Judge Robert Giannasi ruled.

“I reject the General Counsel’s contention that the presence of a stationary inflatable rat near the handbilling or the handbilling itself, either separately or in combination, constituted picketing or coercion,” Giannasi wrote.

Gianassi also said there wasn’t evidence that the union officers moved tables or chairs on the first day of the action, and that any rearrangement of the furniture had an insignificant effect on the secondary employers in any case.

A lawyer for the union said Robb’s office is overstating the law in an attempt to limit the power of unions.

“In our view, it’s really akin to any other political free speech,” attorney William Josem said.

The National Labor Relations Act lays out what constitutes a legal picket line. The statute also makes it unlawful for a union to “threaten, coerce or restrain” businesses and people that aren’t actually a part of a labor dispute with the union. Worker actions that ask people to boycott a neutral party are considered unlawfully coercive.

The NLRB decided in 2011 that use of inflatable rats is “neither picketing, nor otherwise coercive.”

“The dissent labels the 16-foot tall balloon at issue in this case a ‘rat colossi,’” members of the 3-1 Democratic majority that issued the ruling said in that opinion. “It may be that the size of a symbolic display combined with its location and threatening or frightening features could render it coercive within the meaning of” the NLRA, “but such was not the case here,” they said.

The general counsel’s office, while acknowledging the precedential decisions, argues in its brief that they were wrongly decided. It also argues that communication from unions is commercial speech, which the U.S. Supreme Court has held isn’t protected by the First Amendment to the same degree as political speech.

“I’m personally looking forward to seeing the board weigh in,” said Wally Zimolong, the attorney representing the business owners in the case. “I ultimately think they’ll agree with mine and the general counsel’s view that this particular type of activity isn’t protected speech and also violates, I believe, even longstanding precedent of the NLRB.”

There wouldn’t be any First Amendment concerns if the board ends up holding that the conduct wasn’t picketing, but was nonetheless unlawfully coercive because that type of communication “is entitled to lesser First Amendment protection because it is labor and/or commercial speech,” the general counsel’s brief says.

“Federal courts all over the place have found that the rats are First Amendment protected speech,” labor lawyer Dale Pierson told Bloomberg Law. Pierson’s firm represents Local 150 of the International Union of Operating Engineers in a separate case involving the same issue.

“That’s the other hurdle I think the board really can’t get over—they can interpret the NLRA, but it’s not up to agencies to interpret the First Amendment, that’s the courts’ jurisdiction,” Pierson said. “That First Amendment argument doesn’t go away until the Courts of Appeals or the U.S. Supreme Court says the rats and banners aren’t protected speech.”