Robert Iafolla: The union seeking to represent strippers at a Los Angeles club will benefit from a Trump-era NLRB decision holding that exotic dancers at an Ohio club were employees rather than independent contractors.

Star Garden dancers’ right to elect Actors’ Equity Association as their bargaining representative hinges on being deemed employees under federal labor law. The union filed an election petition with the National Labor Relations Board last week.

But Star Garden is likely to oppose unionization by arguing the strippers aren’t employees. The club required at least one of its dancers to sign a “lease agreement” making her a contractor, she told Bloomberg Law in May.

To make its case that the Star Garden strippers are employees, the Actors’ Equity Association can point to the NLRB’s 2020 ruling in Nolan Enterprises Inc. d/b/a Centerfold Club. An all-Republican three-member NLRB panel noted several factors supporting its employee ruling, including that the club exerted significant control over dancers’ opportunities for economic gain.

That decision gives the union a boost in its bid to make Star Garden the first unionized strip club in the US since 1996, when strippers at the now-defunct Lusty Lady Peepshow in San Francisco formed the Exotic Dancers Union.

The NLRB’s 2020 decision would be a “strong” case for the union to cite, said Matthew Bodie, a law professor at the University of Minnesota and former NLRB lawyer. Although there may be some differences between how the Centerfold Club and Star Garden operate, their core business is the same, Bodie said.

Another variable that could influence any dispute over the strippers’ employment status is the looming NLRB case set to change the legal test used to differentiate between employees and contractors.

The board took public comment in Atlanta Opera on whether to ditch the employment classification standard from its 2019 decision in SuperShuttle DFW and replace it with something else, possibly the test from its 2014 decision in FedEx Home Delivery.

But the SuperShuttle test—which is ostensibly more business-friendly—yielded a higher rate of employee wins than the FedEx test, according to a Bloomberg Law analysis conducted in February.

Even if a test minted by the Biden NLRB would make it easier for the Star Garden strippers to secure employee status, switching standards could complicate their case, depending on how far it progresses before a board ruling in Atlanta Opera.

For example, if the regional director rules based on SuperShuttle and then the NLRB changes the standard, the board might send the case back for reconsideration under the new test.

Star Garden management couldn’t be reached for comment. The Actors’ Equity Association didn’t respond to a request for comment. 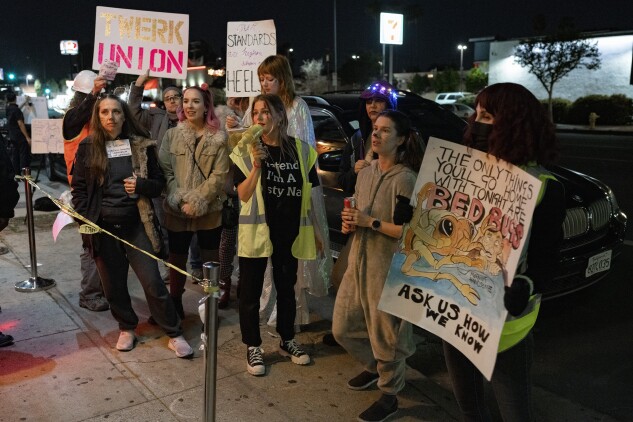 Chris Marr: Paid sick time laws remain the territory of state and local policymakers for at least a while longer, as the Democrat-controlled congressional session wanes with no signs of a federal sick leave policy advancing.

New Mexico and Michigan are among a handful of locales with new or recently expanded requirements for employers to provide paid time off to workers who are ill.

Counting these, 16 states plus the District of Columbia have enacted laws mandating paid sick time or general-purpose paid time off in private-sector workplaces, along with about 20 cities and counties.

The latest versions of a federal proposal—the Healthy Families Act (S.1195 and H.R.2465)—haven’t advanced through their respective Senate and House committees. Although bipartisan legislation in March 2020 created emergency paid leave mandates related to Covid-19, those have expired and the pandemic has failed to spur passage of a permanent federal mandate.

Unlike a paid family and medical leave proposal, the federal paid sick leave measure was never included in the Build Back Better legislation that House Democrats passed last November, since it’s a direct mandate on private employers rather than a federally funded program. No form of paid leave was included in the scaled-down climate and tax legislation that President Joe Biden signed into law Aug. 16.

The New Mexico law, which took effect July 1 after state lawmakers enacted it in 2021, requires employers to award workers 1 hour of paid sick leave for every 30 hours worked and to let full-time employees use 64 hours (or eight work days) per year.

In Michigan, expanded paid sick leave requirements are set to take effect in February, requiring many employers to provide their workers with 72 hours annually, up from the current 36-hour requirement. That change comes after a state judge struck down Republican state lawmakers’ 2018 votes to amend and weaken paid sick leave and minimum wage ballot initiatives.

New York also enacted legislation earlier this year to extend a requirement for employers to provide paid time off for Covid-19 vaccinations through December 2023, a year later than the mandate was initially set to expire.

In much of the US, the availability of paid sick leave depends on an employer’s decision of whether to provide it voluntarily. The Bureau of Labor Statistics estimates 75% of private-industry workers have paid sick days, but coverage varies by industry and job type. Less than 60% of workers in the construction and service industries have access, compared with 94% in management, finance, and business occupations.

Despite pandemic-relief legislation, the rate of workers taking unpaid leave for medical or family reasons increased in the two-year period beginning March 2020, according to an Urban Institute study published this month. Black and Hispanic workers were more likely than white workers to miss work without pay, the study found.