Ian Kullgren: Remember the rail strike that consumed the Biden administration’s attention last month? Well, it’s not over, and the threat of a nationwide disruption is still very real, according to Greg Regan, the AFL-CIO’s infrastructure czar.

The high-stakes negotiations at the US Labor Department included representatives from a few large unions like the Brotherhood of Locomotive Engineers and Trainmen, which represents 37,000 workers. Labor Secretary Marty Walsh, in true House of Cards fashion, brokered a deal after 20 straight hours of talks that kept Washington on pins and needles.

But it may not have been enough.

That’s because rail is a highly niched industry where each group of workers has its own union, Regan said in an interview. Size is important, but specialty can offer other types of leverage. For example, if the Brotherhood of Railway Signalmen were to go on strike, there would be no one to install and repair the signal systems that direct trains.

“If one union does eventually go on strike, it would disrupt the functioning of the freight railway system,” Regan said.

And there’s the fact that both sides have a kind of collective defense mentality when it comes to labor disputes—an attack on one is an attack on all.

If one union were to go on strike, others would refuse to cross the picket line, and rail companies could respond in kind with a nationwide lockout. That’s what triggered the last rail shutdown in 1992, when the International Association of Machinists went on strike against CSX. It took less than an hour for the other freight companies to lock out their workers.

Luckily for Democrats, the union elections won’t wrap up until after the midterm elections, meaning it likely won’t be a campaign issue. (Regan says that was never a consideration from the unions’ perspective.)

Nevertheless, Biden could find himself with a supply chain crisis just in time for the holidays. 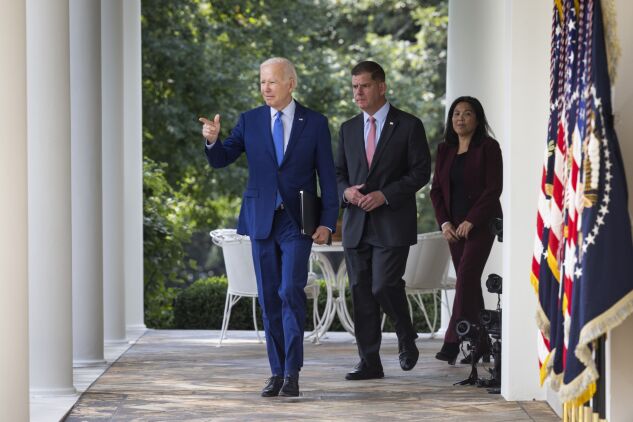 President Joe Biden, from left, arrives with Labor Secretary Marty Walsh to deliver remarks in the White House Rose Garden on Sept. 15, 2022. US railroads and unions have reached a tentative deal, a breakthrough that looks to avert a labor disruption.
Photographer: Jim Lo Scalzo/EPA/Bloomberg

The federation says it plans to target schools that have established vocational and technical training programs and communities of color using intel from its teachers union affiliates. The program launched at two Detroit-area schools this month, and will also be piloted in Austin, Los Angeles, and New York City in the coming months.

In an interview, AFL-CIO Secretary-Treasurer Fredrick Redmond said the Biden administration has been helpful in connecting the federation to local officials to provide support like transportation assistance to participants in the program.

“When we go into a city we’re also going to be meeting with those local officials to try to seek some assistance, particularly in the area of transportation for these young people. And those contacts are being made through the Biden administration,” Redmond said. “The Biden administration has been very, very helpful in this initiative, and very supportive and we will continue to collaborate with them as the need arises.”

Training efforts like the one announced by the AFL-CIO are viewed by the Biden administration as key to resolving the workforce challenges it faces in implementing the bipartisan infrastructure law and investments in semiconductor manufacturing.

The new collaboration between Gardner’s foundation, whose life story was depicted in the movie The Pursuit of Happyness, and the AFL-CIO, offers placement in a registered apprenticeship—which typically have a competitive application process—after graduation, as well as a stipend and transportation assistance during the apprenticeship.

Students participating in the program have to maintain a certain grade point average and complete an apprenticeship readiness program created by the North America’s Building Trades Unions.

Redmond said that the federation is working to expand the partnership beyond just the building trades, and is having conversations with its other affiliates to expand their training offerings, citing the Culinary Workers’ hospitality program and the Communications Workers of America’s cable installation program.

“We want to explain to them that learning a skilled trade, such as a carpenter or electrician can change their life and really present them with a pathway to the middle class,” Redmond said.