Ian Kullgren: The labor movement won’t compromise on a minimum wage less than $15, largely because rampant inflation has made that number less significant than it used to be, AFL-CIO President Liz Shuler said in an interview with Bloomberg Law.

“Fifteen dollars, when we were fighting many years ago, sounded high,” Shuler said. “But today it’s continuing to lose value if we don’t index it to inflation, so we think that’s the baseline.”

Even with inflation, $15 is still substantially more than when Congress last raised the minimum wage in July 2009 to $7.25— equal to $9.47 in 2022 dollars, according to BLS. (If you haven’t checked out the CPI Inflation Calculator, it’s a nifty tool.)

But the AFL-CIO and other advocates say the minimum wage would be at least $24 an hour if it had kept pace with increases in worker productivity since 1968.

Republicans haven’t been willing to swallow that argument, especially since the Congressional Budget Office has said $15 could lead to 1.4 million job losses. Sens. (R-Utah) and (R-Ark.) introduced a compromise bill last year to raise the wage to $10 an hour, but Democrats quickly swatted it down. New York congresswoman called it “legislated poverty.”

Biden called for a $15 minimum wage in his State of the Union speech last week, even though there’s almost no chance it will happen before the midterm elections. Remember, the president passed on an opportunity to raise the minimum wage in 2021—before inflation started ballooning—by declining to overrule the Senate parliamentarian’s ruling that the provision didn’t belong in Covid relief.

Shuler, in the interview, rejected the notion that Democrats settle for a lower number in exchange for regular inflation adjustments, while acknowledging it will only get worse the longer they wait.

Years ago, “I remember people saying, ‘Oh my gosh, fast food workers making $15 an hour?’” Shuler added. “At the time in sounded outrageous. And now people are used to it because we’ve been fighting for so long, but just like $7.25 an hour, it loses its value each year.” 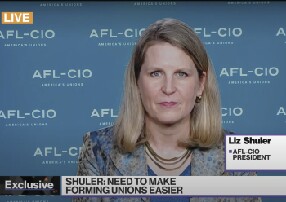 Rebecca Rainey: The U.S. Labor Department will kick off a series of meetings this week to get input on its upcoming overtime proposal, according to an email obtained by Bloomberg Law, a rule that is expected to expand time-and-a-half pay protections to more workers.

The agency is scheduled to meet with labor unions, industry groups, and state and local governments, among other groups, from March 8 through April 12, according to a schedule sent to congressional offices and other interested parties.

Unions and worker advocates were granted three 90-minute sessions with the Labor Department, the same amount granted to three industry groups who were not named in the email.

The Wage and Hour administration is asking the groups to weigh in on what the appropriate salary level should be to exempt workers from overtime pay, the costs and benefits of updating the regulation, and the best way to calculate the new salary level.

DOL’s invite comes after more than 100 business and industry groups pressed the agency in January to hold such meetings and solicit public input before releasing the highly anticipated rule, arguing that previous administrations had done so and that the agency would benefit from getting feedback on how the change could affect the economy.

“This is only the start of our outreach,” acting Wage and Hour Division Administrator Jessica Looman said in a statement to Punching In. “Additional listening sessions will be added all across the country and will ensure that interested parties have an opportunity to be heard and to participate.”

The initial block of time allocated for industry groups was “not where we wanted it to be,” according to Jade West, chief government relations officer for the National Association for Wholesaler-Distributors. But the conversations are “continuing,” and the Labor Department is now “more responsive than they were for specific industry meetings,” she said.

According to the regulatory agenda, the department’s Wage and Hour Division is scheduled to issue the proposal in April but that timeline seems unlikely, given that the DOL has stakeholder meetings on the calendar throughout that month.

The Obama administration issued a rule in 2016 raising the salary threshold under which workers are owed OT pay from $23,660 per year to $47,476. A federal judge in Texas eventually invalidated the rule, finding that threshold was so high it expanded protections to workers Congress meant to exclude.

“I still don’t know that we have gotten through the imperative on our side, which is we should not be doing this at all,” West said.

—With assistance from Paige Smith.