Paige Smith: The U.S. House is poised to vote on whether to allow congressional staffers to unionize this week, as , , , REI, and other workers across the country add fuel to the nation’s current union organizing momentum. Rep. Andy Levin (D-Mich.), a primary backer of the staffers’ efforts, discussed labor’s current fever pitch with Bloomberg Law last week.

“You’ve got a situation where we’ve hit the point of having the worst income and wealth inequality in 100 years and a structural racism crisis that just continues to unfold,” he said by phone last Tuesday. “The great question is, who will decide what justice in the workplace is?”

Levin, a former union organizer and state labor official himself, said the only way workers can have a significant say “in all of these great questions” is through collective action.

“I want everybody to keep our eyes on the prize in getting this basic human right established for our staff,” he said.

Capitol Hill workers aside, the Protecting the Right to Organize, or PRO, Act, is still languishing in the Senate after the House passed it last year. Levin said he hopes this reinvigorated excitement around unionization will serve as a catalyst for legislative change.

“There’s going to have to be this interplay between workers organizing and Capitol Hill that leads to change,” he said. “Everything’s like that.” 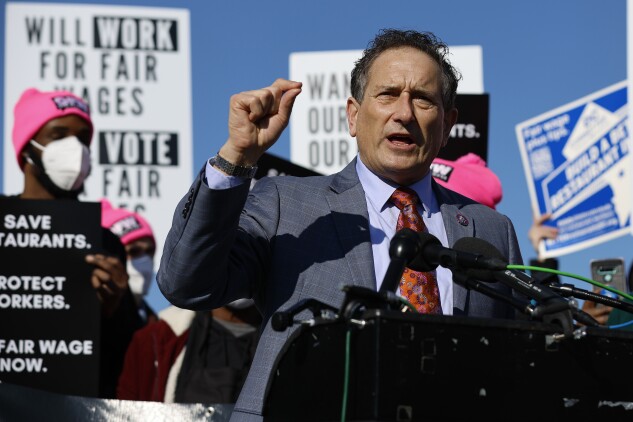 Chris Marr: As state-run paid leave benefits expand to Delaware and Maryland, a new conservative approach is getting a toehold in Virginia with insurance industry backing.

Starting July 1, insurance carriers can write group policies for paid family leave in Virginia under legislation enacted last month. The American Council of Life Insurers touted the concept as the first of its kind and pitched it as model legislation earlier this year during the National Council of Insurance Legislators meeting.

Virginia employers will be able to buy the coverage as an employee benefit that partially replaces a worker’s income when they need time off to care for a new child or a seriously ill family member, or they have family needs related to military duty. Some companies do this already for short-term disability benefits, which cover the worker’s own illness or injury.

Unlike state-run paid family and medical leave programs—such as the one Gov. John Carney (D) is due to sign into law this week in Delaware—the Virginia model imposes no mandate or payroll tax.

“Our industry has been administering medical leave via disability income for many decades,” Cynthia Goff, a vice president at the insurers council, said in an emailed statement. “Until Virginia, really no state recognized family leave benefits as a form of insurance.”

But it isn’t likely to expand access for lower-income and hourly workers, whose employers often don’t provide the benefits unless they’re mandatory and funded through affordable payroll deductions, said Vicki Shabo, a senior fellow for paid leave policy at the New America think tank.

“That is not about, in my opinion, expanding access to paid leave with any kind of guarantee,” she said. “That is about creating a new business line.”

Similar bills were introduced this year in Indiana and Minnesota, but Virginia’s is the only one enacted thus far.

The insurance industry has supported—and has a business opportunity—in other forms of paid leave laws, not just the conservative Virginia approach.

Major life insurers backed the federal paid leave proposal that House Democrats passed in November before it stalled in the Senate. Like many state programs, the federal one would exempt employers if they provided their own comparable plan, potentially administered by insurance providers.

Robert Iafolla: The National Labor Relations Board has made progress during the Biden administration in filling top-level personnel gaps at its regional field offices, though 10 of the agency’s 26 bureaus still have at least one vacancy or temporary appointment in leadership.

More than half of those offices had empty top management posts or acting officials in leadership in March 2021, 23 positions in all. Now, the number of those roles needing a permanent appointee is down to 13.

General Counsel Jennifer Abruzzo told Bloomberg Law that filling vacancies in the agency’s field office has been one of her top priorities.

“While we have filled some key vacancies and are working to fill as many others as we can, we are hindered by budgetary constraints,” Abruzzo said in a statement. “Our lack of sufficient funding has prevented the Agency from filling all of our current vacancies, and with case intake on the rise, has created a significant resource shortage for the NLRB.”

The NLRB is a decentralized agency that handles a great deal of work at the regional level. Field offices are responsible for processing unfair labor practice charges and representation petitions, investigating cases, issuing complaints when charges have merit, authorizing union elections, and litigating matters before administrative law judges. 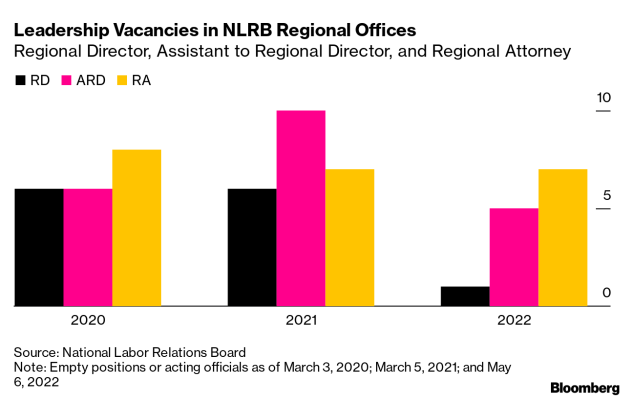 Acting regional director Daniel Nelson heads the board’s Chicago office, which was led by Deputy General Counsel Peter Sung Ohr before he temporarily stepped in as the agency’s top lawyer in January 2021. Ohr assumed that role following the Inauguration Day termination of Peter Robb, the general counsel during the Trump administration.