Ben Penn: One of the many debates captivating Washington as the Biden administration tries to breathe life into its American Jobs Plan is the question of whether $400 billion for home care belongs in legislation focused on infrastructure, a term traditionally associated with roads and bridges.

Republicans’ rigid interpretation of what constitutes infrastructure is a central fault line—and one of the main reasons the White House likely will need to bank on budget reconciliation with only Democratic votes to enact its full $2 trillion vision.

But there are more pressing conflicts within the Capitol Hill Democratic Party, which is still in the early stages of drafting legislation. Among the myriad challenges Democratic lawmakers face is fleshing out the details of President ‘s promise to boost wages, training, and unionizing opportunities for home-care workers while also expanding the availability and quality of those services for the elderly and people with disabilities.

As steep as $400 billion for home care sounds, some experts say that hiring enough qualified professionals to meet surging demand as Baby Boomers retire will cost even more—especially if the bill extends Medicaid funding for more than just a few years.

Democrats are trying to find the proper balance between the twin goals of investing in workers and in expanding service availability, but that’s a complicated juggling act that could create an intra-party tug-of-war.

A sticking point in negotiations is how to spend money on home-care workers—who now earn about $12 per hour on average and are disproportionately women of color—without eating up the funding needed to take about 800,000 Americans off waiting lists to receive care at home covered by Medicaid, according to multiple sources involved in or briefed on the talks.

A simplistic argument advanced on the right is that the Biden administration’s interest in home care is based purely on a political desire to offer a giveaway to the Service Employees International Union, allowing it to collect more dues from the home-care workers it seeks to organize.

But in reality, tens of millions of aging Americans and those with disabilities also have a stake in this process. 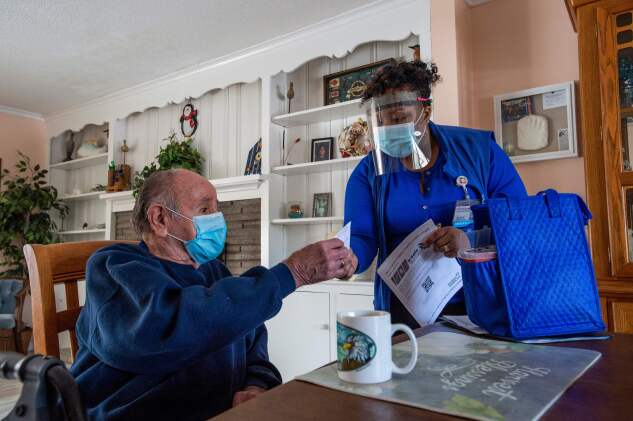 A nurse participating in a home-care vaccination program in Manchester, Conn., hands a recipient paperwork confirming the vaccination in February.
Photographer: Joseph Prezioso/AFP via Getty Images

Organizations advocating for the elderly and people with disabilities have tried to stave off tensions over how the money would get divvied up by joining with SEIU and the National Domestic Workers Alliance in a coalition that’s negotiating with Congress and the administration on the bill.

By speaking in unison, these constituencies—which have splintered to some degree in the past over labor issues in home care—give Democrats a better chance at finding a reasonable solution before they must deal with landmines from the home-care industry. But that’s a conflict for another day.

Paige Smith: The 450-position hiring spree that EEOC Chair (D) announced recently would be the largest influx of new personnel at the workplace civil rights agency in at least a decade.

The plan raises questions about how it would be funded but also about how the resources will be used.

The target of 450 positions would amount to 23% of the 1,939 full-time employees the agency had at the end of fiscal 2020, in September, noted Michael Eastman, senior vice president of policy and assistant general counsel for the Center for Workplace Compliance, an employer-focused group.

The agency’s high-water mark for hiring in the last decade was 339 employees, in 2015.

“We won’t know exactly how many of the 450 will be new hires or internal hires/promotions until the end of this fiscal year,” EEOC spokeswoman Christine Saah Nazer said in an email.

The administration’s preliminary budget wish list didn’t include a topline number for EEOC, and it remains to be seen whether the agency will get a boost in fiscal 2022 and whether funding for the new hires will be part of the mix.

Burrows has said she plans to prioritize efforts to root out systemic discrimination, which involves greater resources than standard EEOC litigation.

While Burrows declined to provide details about how the future hires could be deployed, additional resources may be needed to support the EEOC’s efforts to ensure equity in implementation of infrastructure programs, if Biden’s sweeping plans become reality.

“We’re all supportive of trying to reduce that backlog as much as possible, so I think there is general support for efforts to do that,” Eastman said. “The backlog is still significant.”

Previously, it was paid leave. The annual legislation, which sets spending priorities for the Pentagon, delivered 12 weeks of paid parental leave for some, but not all, federal employees in fiscal 2020. The next installment expanded it to additional groups of workers.

Now, federal-sector unions—fearing Democrats could lose the House or Senate in next year’s midterms—are again looking to the NDAA to get laws on the books that are unlikely to pass as stand-alone bills.

Unions “don’t have the luxury of time or the votes” to go the stand-alone route on priority items, given the divided Senate, said Steve Lenkart, executive director of the National Federation of Federal Employees.

A top priority for the fiscal 2022 bill is to reverse Obama-era legislation that increased active federal employees’ retirement co-pays, said Matt Biggs, secretary-treasurer of the International Federation of Professional and Technical Engineers, adding that union began its lobbying push in February. 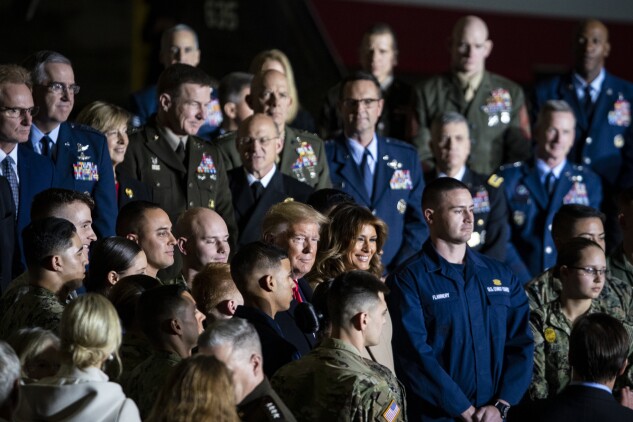 Then-President Donald Trump and the First Lady pose for a photograph with members of the military after signing the Fiscal 2020 National Defense Authorization Act on Dec. 20, 2019.
Photographer: Al Drago/Bloomberg via Getty Images

Federal workers hired after calendar year 2013 pay 4.4% of their annual salaries toward their retirements, while those hired during 2013 pay 3.1%. Employees hired before January 2013 pay just 0.8%.

The due process and union-rights protections unions are seeking would prevent future presidents from following former President Donald Trump’s lead and issuing executive orders that made it easier to fire federal employees and harder for unions to represent them. Unions challenged Trump’s orders, but an appeals court dismissed the lawsuits.

Unions also want the government’s paid parental leave benefit expanded into a more inclusive family leave program. The NDAA could be a vehicle for that, too, Lenkart and Biggs said in separate interviews.