Ben Penn: Early union endorsements in the labor secretary sweepstakes hyped a pair of candidates, but it’s too soon to rule out the possibility that President-elect could select a more under-the-radar option.

Endless speculation about Cabinet picks during presidential transitions is one of Washington’s favorite pastimes, but beware of ambiguously sourced reports and trial balloons at this stage. Biden’s transition team said Friday the president-elect is weeks away from announcing Cabinet moves, Bloomberg News reported.

With those caveats out of the way, Bloomberg Law spoke with numerous former Obama Labor Department officials, union leaders, trade association lobbyists, and sources on the periphery of the Biden transition to separate viable contenders from those best described as the misleading product of the D.C. echo chamber.

Here’s an assessment of the possible contenders:

Rep. Andy Levin (D-Mich.): The first-term Michigan Democrat has to be taken seriously simply because at least four unions with seats on the AFL-CIO executive council have endorsed him to the Biden transition. Most people inside and outside of the labor movement are practically guaranteeing that Biden’s strong ties to organized labor make him disinclined to select a labor secretary who lacks the support of influential union leaders.

Levin, a former top organizer for the AFL-CIO, has serious union bona fides, but we’re skeptical that he’ll pull it off. He has yet to notch a public endorsement from a leader of one of the largest unions, and his vocal opposition to the Trumka-endorsed USMCA trade deal may have alienated some of his old allies in labor.

Plus, if Levin is chosen for the Cabinet, Democrats would risk a tough battle in 2022 to defend his House seat in a district that President lost this year by a narrow margin.d

Boston Mayor Marty Walsh: AFL-CIO President Richard Trumka and the presidents of his federation’s two largest unions have thrown their weight behind Walsh because he checks off some critical boxes. Walsh is a former union leader and has an established friendship with Biden, which would help give him the necessary clout to ensure the White House includes him in top economic decisions.

But some insiders wonder if Walsh is a red herring—a name leaked after Levin started gaining public momentum that suggests a move could be afoot to remove Levin from the equation or at least weaken his candidacy.

Others say Walsh is legit, but find it deeply concerning that the only two figures to draw union endorsements—publicly, at least—are white and male. They note the Labor Department’s vast portfolio gives Biden a meaningful chance to make good on his promises to address racial and income inequality.

Further, Biden will by no means rubber-stamp a Trumka-selected option. Biden will certainly include Trumka in the conversation and is likely to pick someone he approves—but, perhaps, not necessarily his top choice.

Our take: Walsh is already a vocal surrogate for the president-elect, so observers should consider him a serious contender, labor movement divisions aside.

California Labor Secretary Julie Su: Trumka will be inclined to try to forge unity in the AFL-CIO. That could leave room for a third candidate to emerge as a compromise to appease backers of Levin and Walsh, while also satisfying the push for diversity that Biden has said will be essential in the formation of his Cabinet.

Yet Su would be far from a token pick to fill the diversity box. To those unfamiliar with her work out West, Su is seen as a passionate, hard-working advocate for low-wage workers who has a knack for innovative enforcement tactics. And she has plenty of strong supporters in organized labor and at influential workers’ rights groups in Washington.

She’s also been leading a massive state bureaucracy through the pandemic-induced economic crisis, giving her the management experience needed to transition to a federal role.

Two big questions: Does she want the job? And does she have enough national prominence within the labor movement, and Washington connections, to land it? She may prefer to stay in California, but there are a lot of reasons to think Su’s stock could rise.

Sen. Bernie Sanders (I-Vt.): Viability and not desire is a question mark for Sanders. Labor secretary would be a commonsense spot for him to advance his economic policy objectives, particularly at a moment when DOL likely will take on added importance in the first few years of Biden’s administration.

But would Biden take a chance on a Cabinet member with an established political following who’s known as an independent operator?

If Republicans retain their Senate majority after two Georgia runoffs in January, the answer is almost definitely no. Don’t expect Senate Majority Leader (R-Ky.) to make Sanders’ path to confirmation anything but difficult.

The Vermont senator’s presence in Biden’s Cabinet would elevate labor issues to a position of public prominence that we believe they’ve long deserved, but the obstacles to that happening are many.

Paige Smith: The U.S. Equal Employment Opportunity Commission has been busy in the area of religious discrimination. Last week, the workplace civil rights agency voted to update its guidance on the topic, as questions persist about legal clashes at the intersection of religious liberties and workplace protections for LGBT workers.

The Commission voted to approve adding Burwell v. Hobby Lobby Stores Inc. to that guidance. The U.S. Supreme Court’s 2014 decision allowed owners of closely held corporations to mount a defense against government mandates that substantially burden the exercise of their sincerely held religious beliefs, as supported by the Religious Freedom Restoration Act. 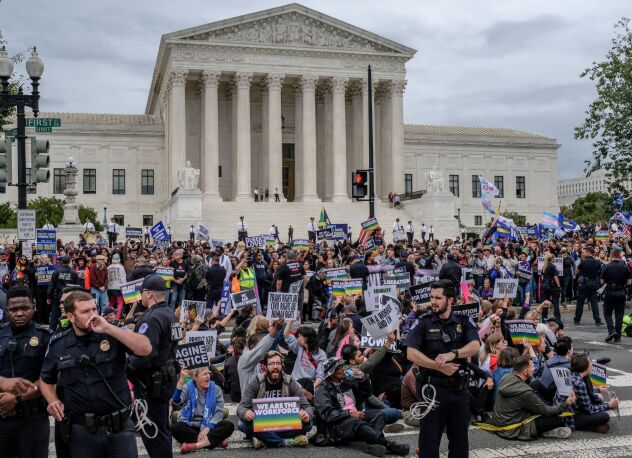 Supporters of LGBT rights blocked the street in front of the U.S. Supreme Court on Oct. 8, 2019.
Photographer: Alex Wroblewski/Bloomberg

A potential conflict with RFRA and LGBT worker protections wasn’t sent to SCOTUS for consideration as part of a trio of consolidated cases the high court decided in June that established LGBT workers are protected by federal anti-discrimination laws.

But Justice Neil Gorsuch said in his opinion in Bostock v. Clayton County that some First Amendment protections of religious liberties, as established by RFRA, “might supersede Title VII’s commands in appropriate cases.”

Dhillon’s Take: EEOC Chair Janet Dhillon (R) said in an interview with Bloomberg Law that Congress should weigh in on the potential conflict.

“That is something that Congress reserved to itself,” she said, adding: “The Bostock decision points out an opportunity for Congress to legislate, and I think they should do that.”

Dhillon’s Future: The EEOC chair said she plans to remain at the commission, regardless of the final outcome of Trump’s efforts to contest the election results. “I was confirmed to a term through July of 2022, and I intend to serve out my term.”

Gustafson said she expects to see “litigation and clarification of the law, especially at the intersection of sex discrimination through religion discrimination.”

“The EEOC’s mission is to protect all employees whom our statutes were meant to protect, and the Commission has been diligent about enforcing all of our statutes, even where the various protections may sometimes come in tension with each other,” Gustafson said. “The law and American pluralism require no less.”