Ian Kullgren: Liz Shuler is now president of the AFL-CIO and the first woman to hold the job—the queen of the U.S. labor movement, if you will. But heavy lies the crown, as they say, and now Shuler has less than a year to prove herself before a four-year term is up for grabs at the union federation’s convention in June 2022.

Shuler was thrust into the role of acting president when longtime AFL-CIO leader Richard Trumka died of an apparent heart attack Aug. 5. After 12 years as Trumka’s second-in-command, Shuler was the only candidate nominated to serve out the last 10 months of his term.

Yet Sara Nelson, president of the Association of Flight Attendants, is an anti-establishment contender who may have eyes on the top spot. It was no surprise when she said through a spokesman before Shuler’s historic selection Friday that the run-up to the convention “provides a basis for lively discussion and debate about how to make unions and the rights that come with them accessible to all working people.”

Here are three major questions as Shuler begins her tenure:

1) Can she make labor more diverse? Shuler represents the changing demographics in organized labor. Union density between men and women was nearly equal in 2020, meaning roughly the same percentage of male and female workers were union members.

Black workers are more likely to be dues-paying union members than Whites, Asian-Americans, or Latinos, according to the Bureau of Labor Statistics. That reality may have influenced the AFL-CIO executive council to pick Fred Redmond of United Steelworkers as the federation’s first Black secretary-treasurer, replacing Shuler and serving as her deputy.

Together, they could be an effective pair in bringing more non-White workers and women and transgender individuals into the fold. But that will depend largely on whether AFL-CIO member-unions can appeal to traditionally non-union workplaces (Amazon anyone?).

2) Will she live up to her grassroots pledge? In her first interview as president, on Bloomberg TV, Shuler portrayed herself more as a rabble-rousing activist than the experienced figure she’s seen as in labor circles.

“The pressure is building on the ground, especially through this pandemic, where we have frontline essential workers going to work without safety precautions—workers who want to speak out [but] are afraid because they know the law is not on their side,” Shuler said during the interview Friday. “So, yes, we need to build pressure on the ground along with the pressure on Capitol Hill.”

Shuler is said to share the opinion that was at the heart of Trumka’s approach—that the AFL-CIO should focus on wielding political power in Washington. Nelson and her supporters believe it should engage more directly in organizing.

But perhaps it’s not an either-or proposition—after all, grassroots movements can change politics, and Shuler could tap into a nexus between the two.

It will be worth following whether Shuler, an insider’s insider, can build a coalition of activists who show up and stay on message.

3) Can she break the logjam over the PRO Act? The sweeping legislation to overhaul labor law is a top priority for unions—and a major problem, as it’s blocked by the Senate filibuster after winning House approval.

Shuler told Bloomberg TV she’s “laser-focused” on keeping up the fight on Capitol Hill, “but more importantly, in the streets.”

“On the ground, we have a grassroots movement, in every state in every major city in this country,” she said. “And working people have had enough.”

It’s true Trumka’s death could spur a full-court press to pass the PRO Act (Shuler said it may be renamed for him). But the fact remains it’s still a long shot, especially with President and moderate Senate Democrats unwilling to scrap the filibuster.

Either that, or she’ll have to figure out how to avoid taking the blame when the effort falls short.

—With assistance from Macarena Carrizosa

Ben Penn: The U.S. Labor Department has postponed plans for a phased reopening of its offices by at least a month, as the department’s leader confronts the same Covid-19 safety quandaries as the employers he regulates.

Labor Secretary during a wide-ranging interview with Bloomberg journalists Aug. 19 expressed frustration with how the surging delta variant is complicating the nation’s jobs recovery.

“I would love to be able to see my team at the Department of Labor, but keeping them safe at home, it’s OK,” he said over Zoom from his Boston home. 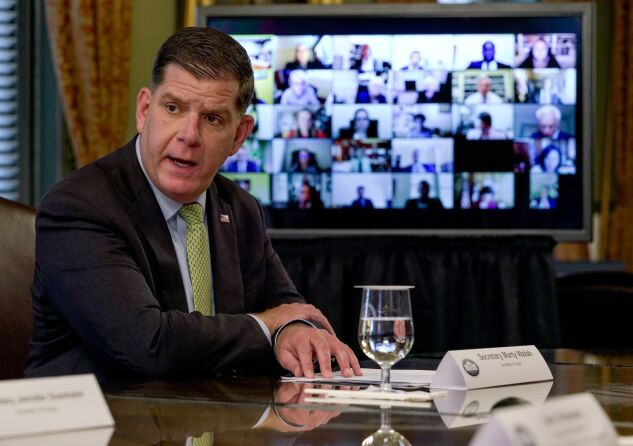 Labor Secretary Marty Walsh speaks during a meeting of the administration’s task force on union organizing in May.
Photographer: Jemal Countess/UPI/Bloomberg

Five months into his tenure, Walsh has yet to make Washington, D.C., his permanent base or meet face-to-face with the bulk of DOL’s 15,000-person workforce.

Deputy Secretary Julie Su notified employees earlier this month that plans for up to 50% of DOL workers to return to offices Sept. 7 were delayed until no earlier than Oct. 7.

Her staff-wide email, shared with Bloomberg Law, said phases two and three, which allow for up to 75% and 100% of workers to report in-person, were moved back to Nov. 8 and Dec. 8, respectively.

Su, the former California labor secretary, has been working from the West Coast since her confirmation July 13, per a source familiar with the arrangement.

“I think we’re both going to be a little more public-facing together,” Walsh said when Bloomberg Law asked whether he’ll give Su a policy-focused portfolio or have her continue to focus on the administrative and management duties typical of the department’s No. 2. “I think that’s important that people see that.”

Walsh is likely conscious of GOP fears that she’d be a “shadow secretary” after some progressives had pushed for Biden to give her the department’s top job. His answer sought to tamp down any notion of a clash.

He recounted an hour-plus call he had had that day with Su about DOL’s budget, part of a regular dialogue he said he’s enjoyed having with her.

Then, unsolicited, Walsh brought up chatter dating to the transition about he and Su competing for the Cabinet post.

“There’s no competition for the job,” he said. “We were both—our names were mentioned; the president made a decision. He made two decisions—two great decisions, I hope people think as time goes on.”

Walsh and Su, both in their first federal government jobs, are in the early stages of cultivating a working dynamic that will be critical to the department’s overall execution. Until the delta variant is contained, however, it may be some time before they’ll have the pleasure of collaborating face-to-face.