View of outreach materials are seen at a press conference for a Ban The Box Petition delivery to the White House on Oct. 26, 2015.
Photographer: Larry French/Getty Images for ColorOfChange.org

States and cities across the U.S. are passing “ban the box” laws in an effort to level the hiring playing field for people convicted of a crime.

The different laws may have a common goal, but employers often face varying standards with which to comply. State and local laws can vary by who is covered, and how the question of criminal convictions can be asked.

In 2019 alone, Colorado, New Mexico, Maine, and North Dakota have passed laws requiring that employers remove from job applications questions pertaining to criminal convictions. In total, 35 states have some version of a ban the box law. Thirteen of those states, the District of Columbia, and several cities and counties have laws in place that ban the practice from private sector companies specifically.

About a third of non-government workers are covered by state and city laws, said director of the National Employment Law Project’s Fair Chance Program. That expands to over two-thirds of U.S. workers if you include laws that pertain to public employees, those that govern employers’ ability to inquire about expunged histories, and other ban the box variations.

And as marijuana is legalized or decriminalized across more jurisdictions, cities like San Francisco are looking to expand restrictions on probing criminal histories to include people with minor drug convictions. 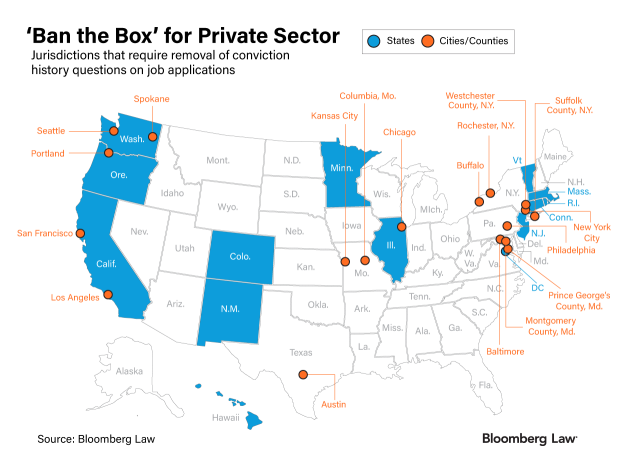 “There has been a big push to take the box that deals with criminal convictions off of the application,” said James Reidy, a management-side labor attorney in the Manchester, N.H., office of Sheehan Phinney.

Questions about criminal convictions at the start of the hiring process were seen as a roadblock to employment for those with a criminal history, and research showed there was a “direct correlation” between someone’s failure to get gainful employment and high recidivism rates, Reidy said.

Still, there isn’t a uniform approach on ban the box laws in different state and local jurisdictions.

For example, California’s law requires private and public employers to conduct criminal background checks after a conditional offer of employment has been made. In New Mexico—one of the latest states to adopt legislation—the question is prohibited on the initial job application, but can be asked at a subsequent interview before an offer is made.

Many of the state laws are based on enforcement guidance published by the Equal Employment Opportunity Commission during the Obama administration. Its goal was to reduce discrimination during the hiring or screening process, as the practice of eliminating past offenders from consideration for a job can disproportionately affect minorities.

“It’s really important to emphasize that these laws are about more than just removing the question on the application,” Emsellem said. “Most of the really good laws, like in California, incorporate the standards of Title VII and the case law and the EEOC guidance into the law.”

The EEOC guidance has its limitations as well, however. In August, the U.S. Court of Appeals for the Fifth Circuit said the civil rights agency overstepped its authority with the 2012 guidance and that it wouldn’t be binding in Texas, which had challenged enforcement of the guidance.

Next Wave of Laws?

The next wave of “ban the box"-related legislation likely will be a response to other city and state changes.

In April, the San Francisco Board of Supervisors passed a measure to amend the city’s code to limit an employer’s ability to ask job applicants about pot convictions. The new measure built on San Francisco’s “fair chance” law that barred inquiries for convictions for decriminalized behavior, and gave employees and applicants the right to sue over violations.

“We’re in a historically low unemployment, so a lot of employers are reconsidering their employment requirements,” Reidy said. “I believe you should tailor the rules to the job or the nature of the workforce.”

At the federal level there is no law banning the box, but lawmakers are working on such legislation.

The House passed the Fair Chance Act as an amendment to the bill to reauthorize spending for the Department of Defense. Meanwhile Sens. (D-N.J.) and Ron Johnson (D-Wis.) are sponsoring the companion bill in the Senate, and have a bipartisan group of co-sponsors.