Sharon Gustafson, left, who was fired last week as general counsel of the U.S. Equal Employment Opportunity Commission, speaks during a press conference outside the U.S. Supreme Court in December 2014, before she joined the EEOC.
Photographer: Win McNamee/Getty Images

The Biden administration’s sudden termination of the Trump-appointed top lawyer at the EEOC has raised questions about the legality of the action and potential effects on how the workplace civil rights agency functions.

The White House informed Sharon Gustafson that she would be terminated in her role as U.S. Equal Employment Opportunity Commission general counsel on March 5 after she cited her four-year term as one of the reasons why she wouldn’t heed the administration’s call to resign.

Gustafson, whose Senate-confirmed term wasn’t due to conclude until 2023, accused the administration of a political power play that came after the White House fired or forced out Trump-appointed general counsels at other independent federal agencies, including the National Labor Relations Board.

Yet apart from the political controversy, the White House’s sacking of Gustafson has fueled questions about the president’s ability to fire an independent agency’s general counsel and the long-term role of the EEOC’s top lawyer, given recent changes to the position’s litigation powers.

Complicating the legal debate is the fact that the statute that created the EEOC sets it apart from other independent agencies, and its general counsel operates in conjunction with agency leaders in different fashion.

“The EEOC is in sort of a murky status in terms of whether it’s an independent agency or an executive agency, and therefore subject to the president’s whims,” said Ronald Cooper, who served as EEOC general counsel under President George W. Bush.

In Gustafson’s letter to the White House, in which she declined to resign, she said she wasn’t aware of previous EEOC general counsels being fired “for being appointed by the wrong political party.”

“If an incoming administration were to cut short the term of a General Counsel, the gaps in which the EEOC lacks a General Counsel would be even more frequent,” Gustafson wrote. “Congress’s enactment of a four-year term was surely intended to reduce this circumstance. I see the wisdom of it.”

President Joe Biden’s termination of ex-NLRB General Counsel Peter Robb after he wouldn’t step down on Jan. 20 has prompted challenges over his authority to carry out the action and also over subsequent moves made by Robb’s acting replacement.

After Robb was fired, some pointed to the 2020 U.S. Supreme Court decision in Seila Law v. Consumer Financial Protection Bureau, which backed the president’s authority to remove top leaders of a similarly structured independent agency.

But former acting EEOC Chair Victoria Lipnic, a Republican, said the EEOC is different than the NLRB, whose general counsel is more “empowered.”

Although there could be challenges to EEOC litigation based on arguments that Gustafson was unlawfully fired, attorneys said they’d be difficult to win.

“I think it is unlikely such challenges will be successful,” said David Lopez, who served as EEOC general counsel during the Obama administration and was replaced by Gustafson.

Unlike the NLRB general counsel, who has adjudicative authority, the EEOC’s general counsel determines only in some cases whether suit should be filed, said Lopez, now co-dean of Rutgers Law School.

Neither Gustafson nor a media representative for the EEOC responded to requests for comment.

Title VII of the 1964 Civil Rights Act created the EEOC to enforce the statute’s mission of anti-discrimination, and outlined the agency’s composition. The statute didn’t explicitly address whether a general counsel can be fired by a president, but some management attorneys say the administration’s action is legally dubious.

The statute doesn’t say that the general counsel serves at the pleasure of the president, according to Lawrence Lorber, a former Labor Department official and now counsel at Seyfarth Shaw.

“There’s a question as to the authority of this because there’s a term appointment,” Lorber said. 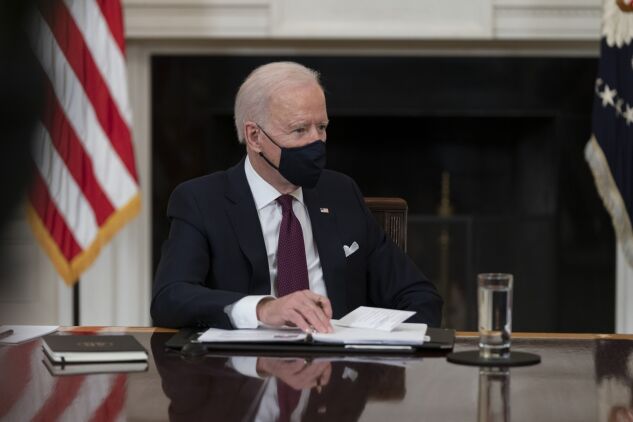 President Joe Biden holds a discussion about the American Rescue Act at the White House on March 5, the day Gustafson was fired.
Photographer: Chris Kleponis/CNP/Bloomberg

“This is one of the ways Congress ensured that the agency remains bipartisan and, true to its structure, independent,” she said in an emailed statement. “Last week’s action is a strike against these principles and, worse, could encourage parties to challenge the authority and legitimacy of the Commission’s litigation efforts to eliminate unlawful employment discrimination.”

Michael Lotito, co-chair of Littler Mendelson’s Workplace Policy Institute, pointed to the relationship between the EEOC and the White House and said the agency might be “feeling a chill on their independence going forward.”

“I concluded that, not withstanding the four-year term, I worked at the pleasure of the president,” he said, adding that he believes “the norm” is the general counsel leaving after an election in which control of the White House changes hands.

Changes to the Role

Changes to the role of the EEOC’s top lawyer in recent months have made its function even more different than comparable roles at the NLRB or other independent agencies.

Before March 2020, when the first changes were made, the commissioners would only vote on litigation or briefs that required significant agency resources, that may cause public controversy, or that addressed new areas of law. The general counsel now has significantly less authority.

“Once the commission voted to change the delegation to the general counsel in January of this year, there’s really not much delegation remaining to the general counsel’s office,” Lipnic said. “The authority to bring cases now really has been returned to the commission—while it doesn’t dictate how every case will be voted on, the Republican members control the voting majority.”

Republicans are slated to maintain a majority on the panel through July 2022, when GOP Commissioner Janet Dhillon’s term expires, at which point Democrats are expected to assume control once a nominee can be confirmed.