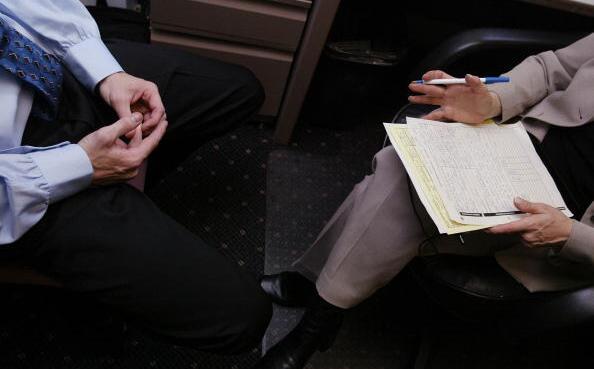 Since 2016, 13 states and Puerto Rico, and 13 cities or counties have passed legislation to regulate the use of salary history in hiring practices.
Photographer: Chris Hondros/Getty Images

Coastal blue states have a reputation for passing worker-friendly legislation, but in the case of bills to ban inquiries into workers’ pay history, traditionally conservative areas of the country are also jumping on board.

Since 2016, 13 states and Puerto Rico have passed legislation to regulate in some form the use of salary history in hiring practices, and another 13 cities or counties have followed suit. The aim of salary history bans is to close the wage gap for women and minorities by not perpetuating pay that may be less than their white, male peers.

Historically conservative Maine and North Carolina are the latest states to subscribe to this theory. Maine lawmakers passed legislation April 2 that would ban employers from asking job candidates for their pay history, and it now heads to the desk of Gov. (D). North Carolina Gov. (D) signed an executive order the same day to bar state agencies from asking job applicants for their pay histories or using prior compensation information to decide salary offers.

All employers are banned from asking the pay history question in California, Connecticut, Delaware, Hawaii, Massachusetts, Oregon, Vermont, and Puerto Rico. San Francisco, Cincinnati, and Philadelphia have also passed broader bans. In New York, the patchwork of state and local laws is especially pronounced with Albany and Westchester counties and New York City restricting all employers from asking about pay history. 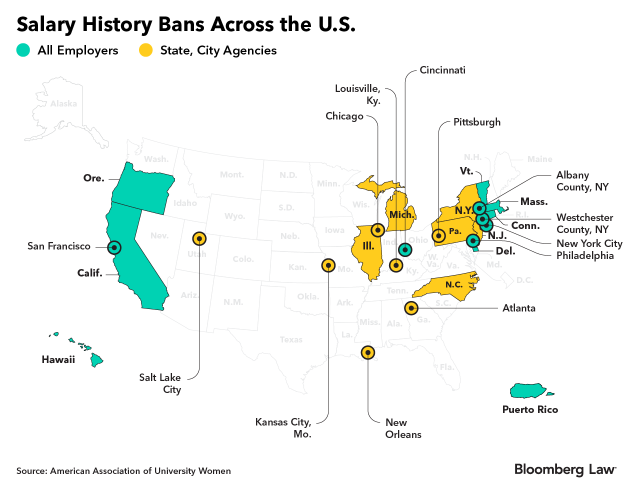 Women working full time are typically paid just 80 percent of what men are paid, according to research from the American Association of University Women. “We don’t yet know how these single bills will impact the gender pay gap, but we do know employers and employees are seeing the benefits,” Kim Churches, chief executive officer at AAUW, told Bloomberg Law. “You’re getting a diversified and qualified pool of workers, and they get a better chance to be paid what’s appropriate.”

Increasing momentum in states and cities to address pay gap could be attributed to not only the spotlight that’s shining on the issue, but also the lack of any federal rule to prevent discriminatory pay disparities.

Lawmakers in the House on March 27 passed the Paycheck Fairness Act, which would amend the Fair Labor Standards Act to prohibit employers from paying different amounts to individuals in similarly situated jobs, unless warranted by “bona fide job-related factors” that are “consistent with business necessity.” The Democratic-led bill is unlikely to find similar success in the Republican-controlled Senate.

“Given the political environment at the federal level, what we’re seeing is a lot of states and local governments stepping in to fill a perceived gap,” Julie Trester, a management-side labor and employment attorney in Cozen O’Connor’s Chicago office, told Bloomberg Law. “They see this as a way to ensure that problems with salaries are not perpetuated from one employer to another.”

State agency bans on salary history in state agency hiring processes are a “good bellwhether that these policies are coming fast and heavy now,” according to Trester. Though these ordinances are unlikely to directly affect local employers, “I think that should be a wakeup call” that broader restrictions could be coming, she said.

Moreover, state and city agencies serve as a pilot test of whether salary history bans can correct pay discrepancies, and give lawmakers an idea of whether they should be rolled out to the general public, she said.

Who could be next to pass salary history legislation?

Churches said she’s keeping an eye on Illinois for an expansion of the ban from state agencies to all employers. Former Gov. Bruce Rauner (R) vetoed the legislature’s last effort to pass a bill, but new Gov. J.B. Pritzker (D) has indicated he’s amenable to a broader mandate.

“There’s a much more robust national dialogue about pay fairness in the workplace today for everyone,” Churches said. “I’m more optimistic than ever before.”