The Covid-19 pandemic has yet to make a meaningful impact on average first-year pay raises for union-represented workers this year, according to a Bloomberg Law analyst.

That average is now equal to 2019’s year-to-date average and behind last year’s average when lump sums such as bonuses are included. This means unions have lost the pay raise advantage they previously enjoyed in comparison to last year, based on the latest two-week update of Bloomberg Law’s database. It appeared early in 2020 that higher raises might be ahead for workers this year.

“It’s safe to say that any week-to-week changes we’ve been seeing in average wage increases so far this year have not been an immediate response to the coronavirus outbreak, though this may change in the weeks ahead,” Bloomberg Law analyst Robert Combs said. “There were some indications two weeks ago that the pandemic had started driving these changes. But given that raises had already started decreasing before the crisis kicked in, it seems likelier that 2020’s downward wage trend in union negotiations has been a general reaction to a cooling economy, rather than an immediate response to Covid-19.”

About 16.4 million workers in the U.S. are covered by union contracts. The 2020 figures are based on 280 contract settlements added to Bloomberg Law’s database since the beginning of the year. Thirty-one settlements were added in the two-week period that ended May 6.

On a Plain, for Now

The overall average increase stayed at 3.3%, the same as the most recent update and the lowest since January. This matches the year-to-date average in 2019. When lump sums such as bonuses are included, however, the average pay raise in 2020 is 3.6%, compared with 3.7% for the year-to-date period in 2019.

The nonmanufacturing average also has fallen behind 2019 for the first time. First-year increases without lump sums averaged 3.9%, compared with 4% at this time last year. Manufacturing remains ahead of 2019—3.1% compared with 2.8%, while the government averages for both 2020 and 2019 are 2.8%. 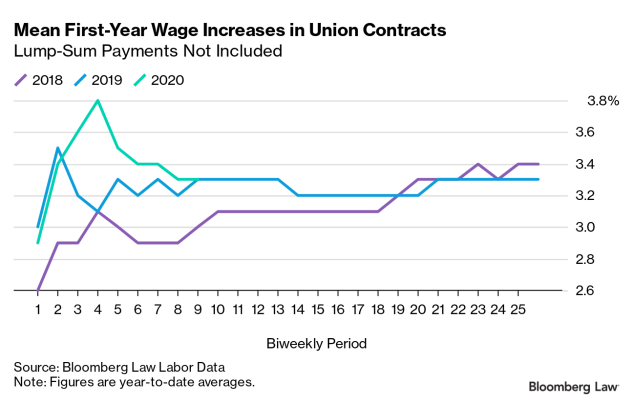 “It’s still hard to say what impact the pandemic has had on the numbers,” Combs said.

Among the major settlements added to the database is a new six-year contract extension between Boeing and the Society of Professional Engineering Employees in Aerospace, which represents about 13,000 engineers at the company, and a three-year contract between the city of Tampa, Fla., and the Amalgamated Transit Union that covers about 1,900 workers.