Proponents of legislative efforts to close the persistent pay gap in the U.S. believe the Covid-19 pandemic and the racial justice movement will provide leverage to pass new federal and state proposals this year.

Early data from the pandemic revealed women and workers of color have been disproportionately impacted by pay cuts, job losses, and other economic fallout. The cumulative effects have exacerbated the pay gap, advocates say, and prompted a host of new state laws passed in 2020 targeting inequities in compensation.

Now, with Democrats holding the levers of power in Washington, House Democrats are mounting a renewed effort to pass federal legislation, while a flurry of proposals are being promoted on the state level as lawmakers try to seize what they see as a moment for change.

“It’s clear that the pandemic may erase the gains that women, particularly women of color, have made in recent decades, so stronger equal-pay laws would send a clear message that employers cannot take advantage of the hardships they face in the market,” said Shirley Lin, a professor at New York University School of Law.

While the pandemic and the Black Lives Matter movement have prompted an increased number of employers to commit to diversity and inclusion, elements of the business community have been reluctant to support legislative mandates for pay transparency, and some measures approved in 2020 that took effect this year have triggered litigation.

House Democrats last month reintroduced the Paycheck Fairness Act in Congress. The legislation would address pay equity, in part, by demanding more transparency from companies about worker pay. The U.S. Chamber opposes it, but its sponsors—all Democrats—say the pandemic gives the bill new urgency.

State laws that ban using salary history to push for pay equity are stronger than current federal law, but are “subject to litigation and challenges down the road,” said Tracey Diamond, a partner at Troutman Pepper, who represents and advises employers.

“It’s easy to say something in a statute, but hard to put it into practice,” Diamond added. 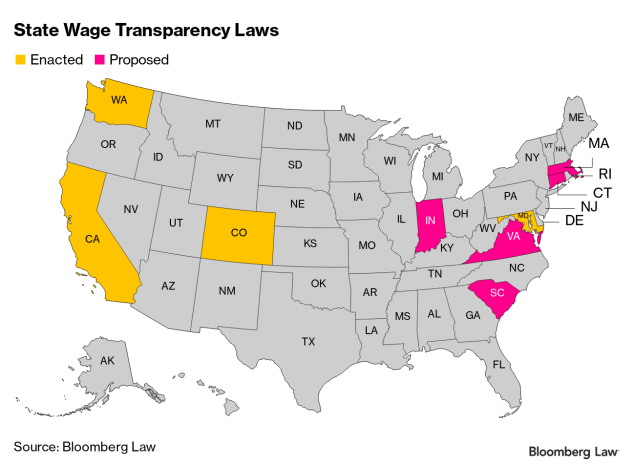 ‘Time to Figure This Out’

Democratic lawmakers in states that include Connecticut, Indiana, Massachusetts, South Carolina, and Virginia this year have filed measures to require companies to provide salary information for jobs in hiring and for current workers to access. The trend spotlights the need for transparency to address historic pay gaps, advocates say, and bucks common employment practices that keep wage information private.

Existing gaps for women, particularly women of color, are the difference between facing greater rates of Covid-19 infection, losing housing and facing hunger, or just cutting back on expenses, said Virginia Sen. Jennifer Boysko (D), who is proposing wage transparency legislation. Her bill would require employers to set a salary range when posting job notices.

“It’s time to figure this out—these are not trivial differences,” Boysko said.

More than a dozen other states have passed laws to promote pay equity. Some of the strongest took effect in January in Colorado and California, several attorneys said.

The pandemic’s impact could get even worse, as unemployment rates have skyrocketed for women of color in particular. Women account for 55% of overall net job loss since the start of the pandemic, according to recent data, raising the possibility that many will be forced to take jobs that pay less to return to work.

Transparency and salary history will be essential for women trying to rebound after the economic and public health crisis, said Andrea Johnson, who directs state policy efforts for the National Women’s Law Center.

“Without transparency and equity, these women will be forced to choose a lower-paying offer, given the existing gap,” Johnson said. “Covid-19 and the racial justice uprisings over the summer have really pulled back the curtain and exposed, in a way, that Black and Brown women are being hurt by many policies and practices.”

The Biden administration has said it will support legislation to address inequities, though federal laws addressing pay discrimination have remained largely stagnant in recent years. The Paycheck Fairness Act would require government collection of employer pay data and ban employers from asking applicants about salary history. It also would make it easier for workers to bring claims.

While salary-history bans have been added to the books in at least 14 states, some of the newly introduced state bills would require certain employers to provide compensation ranges for positions—something only a handful of states now mandate.

In Massachusetts, for example, Rep. Josh Cutler (D) filed a bill that would require a company to provide a job’s compensation when an applicant asks. He said it wasn’t motivated solely by what’s happened during the pandemic, but “the workforce changes reinforce the need for it.”

Indiana Rep. Sue Errington (D) said she introduced a proposal to promote pay transparency as a “strategy for closing the wage gap.” Offering a salary range upfront, she said, will help level the playing field.

“Covid-19 has certainly exacerbated the issue. Our economy is suffering as a result,” she said. “So as we work to rebuild our economy, it only makes sense to rebuild it in a way that promotes equality and fairness for all.”

The transparency element of Colorado’s law is among the most stringent state requirements, attorneys say. Employers must make efforts to announce all job opportunities and include the compensation range and all benefits.

Washington, California, and Maryland have passed laws to require job applicants get a salary range if they ask for it.

California in March will begin collecting pay data from companies as part of its new measure to require companies with more than 100 employees to provide salary information by race and gender. The measure mirrors a federal enforcement effort that was placed on hold last year.

Colorado’s new law, however, already is being challenged in federal court by the Rocky Mountain Association of Recruiters. The business trade group argues that the “burdensome” requirements will destroy trade secrets and put the state at a competitive disadvantage.

Employers also have struggled to keep up with the patchwork of laws, said Joy Chin, an attorney with Jackson Lewis who represents employers. Companies are concerned about their ability to compete if forced to publicly post compensation ranges for positions, and that they’ll be exposed to liability, she said.

Still, Chin said she recommends voluntary pay audits because they can pinpoint unexplained differences among workers before a lawsuit is filed or the government takes action.

“These companies no longer have the luxury of being able to stick your head in the sand and hope for the best,” Chin said. “That’s a thing of the past.”

Marc Freedman, the U.S. Chamber’s vice president of employment policy, said the federal Paycheck Fairness Act won’t address the question of whether employers are improperly paying their employees. He said the data collection will be used to “mischaracterize what employers are doing.”

Yet the Chamber is open to other ideas about fair pay. “I think we would entertain conversations on it,” he said.

— Andrew Kreighbaum contributed to this report