Efforts to overturn the requirements are being closely watched by other local governments, and could test the power of municipalities and the scope of federal labor law, attorneys say.

“It will be interesting to see how the courts are going to rule on the lawsuits and if they gain traction,” said Sehreen Ladak, a Jackson Lewis attorney in Los Angeles, who represents employers. “That will certainly have an impact on how or if the ordinances for hazard pay continue or are modified, and whether they expand to other industries.”

While retailers in several parts of the country boosted essential workers’ pay early in the pandemic, some of that was funded by localities or through federal stimulus money. Many of those bonuses have been discontinued. 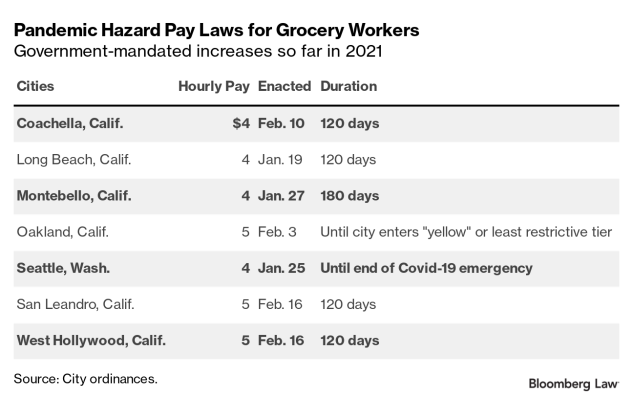 The most recent slate of bonuses are being driven by local laws requiring hazard pay for workers at large grocery chains, pharmacies, and in at least one case, farms. The laws generally require a $4 or $5 an hour bonus for workers, which for some can mean a 25% increase in their normal pay.

In California, where most of the momentum for these laws is building, grocery worker pay averages $18 an hour, according to the California Grocers Association.

Meanwhile, food stores were among the few businesses that were open amid shelter-in-place orders, and double-digit increases in grocery store worker deaths were reported, University of California, San Francisco researchers found.

The new mandates are being challenged in at least a half dozen federal courts, including in Seattle and several California cities. A ballot initiative to boost hazard pay in Portland, Maine, also was challenged in court.

“The argument they are making is that these ordinances are getting in the middle of a bargaining process for wages at the federal level,” said Daniel Altchek, an attorney with Saul Ewing Arnstein & Lehr. “This is unique and it’s going to be hard to find precedent with other types of legislation that are similar to this.”

Some cities maintain that grocery store revenue has increased during the pandemic, so they can afford the temporary pay increase. But Kroger announced store closures in Seattle and Long Beach, Calif., after hazard pay measured passed, citing the cost of abiding by the new laws.

In some states where the hazard pay ordinances passed, unions negotiated for months to increase workers’ pay. Most retailers also voluntarily increased pay for workers, and some reported record profits during the pandemic, Bloomberg Intelligence analyst Jennifer Bartashus said.

“This is an example of labor flexing their muscles during the pandemic and lobbying local government,” said Seyfarth Shaw attorney Scott Mallery of the wave of cities passing hazard pay mandates.

Morrison & Foerster attorneys representing grocers’ groups in Seattle and California argue the ordinances are unconstitutional because they don’t apply equally across industries and the National Labor Relations Act preempts them.

“Firefighters, police officers, health care workers, as well as transportation, sanitation, and restaurant workers are essential, yet grocers are the only businesses being targeted for extra pay mandates,” Ronald Fong, California Grocers Association executive director, said in a statement. “These ordinances will not make workers any safer.”

Attorneys say the equal protection argument could be a high hurdle to clear.

“These are the kinds of things courts defer to legislators on,” said Edgar Sargent, an attorney with Susman Godfrey, who defended Seattle’s minimum wage hike from a constitutional challenge in 2014. “When someone comes into court and says, ‘This isn’t fair, we are forced to pay more,’ the courts will say, ‘Take that to City Council.’”

Foster said courts give latitude to states and cities to set minimum wages as long as they apply across industries. But targeting specific companies or industries could appear like the government is interfering with collective bargaining, he said.

And while grocery associations can cite the NLRA in an effort to stop the laws, that could be seen as counterintuitive, Sargent said.

“I thought it was pretty outrageous they would take this pro-union law saying you can’t raise the wages because some of the workers are protected by unions,” he said.

A report from the University of California San Francisco found a 34% increase to grocery store workers’ chance of dying in 2020 compared to the previous three years. The study reviewed data from the California Department of Public Health.

And a report from the Brookings Institution found that 75% of Americans support pay increases for grocery workers during the pandemic.

On Jan. 25, the Seattle City Council enacted a measure requiring large grocery stores to pay an extra $4 hourly during the pandemic. The council said the pay was necessary for essential workers who risk contracting Covid-19. Seattle also passed a hazard pay ordinance that required gig companies to provide premium pay.

Coachella, Calif., on Feb. 10 became what is thought to be the nation’s first locality to pass a hazard pay ordinance that includes farm workers. Los Angeles County and San Jose in the Silicon Valley are poised to pass their own ordinances on Feb. 23, the same day a California state judge will hear arguments in the California Grocers Association’s Long Beach lawsuit.

While most recent laws have been on the West Coast, a Maine judge Feb. 1 upheld Portland’s voter-approved ballot measure requiring employers to boost the pay of minimum wage workers during declared emergencies, but delayed implementation until 2022. Both sides pledged to appeal the ruling.

Some grocery chains say the cost of the measures will be passed on to consumers through higher store prices. A $5 hourly bump for store workers would annually cost a family of four an extra $400 in their grocery bills, according to the California trade group’s study. It says the mandate will raise store costs by 28% in the low-profit margin, high-labor cost industry.

, Trader Joe’s, , and are among the stores covered under Oakland’s emergency pay law passed Feb. 2, which requires an additional $5 hourly during the pandemic.

“It’s unfortunate that the largest grocery corporations in our country would rather file lawsuits against cities than share some of the incredible wealth they’ve accumulated during this pandemic with their frontline workers who so desperately need relief,” Fortunato Bas said in an emailed statement.

Overall, the food retail industry has seen sales and profit surge in the past year as demand for food for at-home consumption has risen, offsetting higher costs associated with hazard pay and other initiatives to protect employees and customers amid Covid-19, Bartashus of Bloomberg Intelligence said.

Devin Ramos, who has worked for a grocery store in Alameda, Calif., for 23 years, hopes his city follows the growing trend. His store, which he declined to name, offered hazard pay early in the pandemic, but stopped later last year, as did many retailers nationwide.

The Alameda City Council is scheduled to vote on a pandemic pay boost mandate March 2.

—With assistance from Chris Marr in Atlanta.