Three days before was sworn in as president of the U.S., the Department of Labor dealt a blow to one of the incoming administration’s sole allies in Silicon Valley. the agency alleges in its lawsuit, systematically underpaid women, Black, and Asian workers at the company’s headquarters.

The Labor Department and Oracle are still locked in litigation and awaiting a ruling any day on the merits of the discrimination claims, less than 100 days before another presidential election—one that could knock Oracle’s ally Trump out of the White House, and potentially usher in a president ardently focused on reducing economic inequality in America.

The pay discrimination lawsuit against Oracle has become the DOL’s most prominent and controversial enforcement action under the Trump administration, and it could be decided as protests and conversations about race and equality, including in the workplace, play out nationally.

“Given the current climate, it makes Oracle stand apart from many in corporate America who don’t want their fingerprints on an action seeking to eliminate the authority of an enforcement agency devoted to finding and fixing systemic racism,” said Mickey Silberman, an attorney who represents employers in enforcement actions brought against federal contractors like Oracle, but isn’t directly involved in the case.

The litigation has pitted two entities against one another—a stalwart team of DOL civil rights attorneys, focused on rooting out unequal pay practices in Silicon Valley, against aggressive litigant Oracle, defending its reputation—in heated litigation that’s lasted the entirety of the Trump administration.

Oracle also assailed the Labor Department in a separate lawsuit, saying the forum in which DOL discrimination allegations are tried violates the U.S. Constitution.

Oracle isn’t alone in its frustration with the Labor Department’s Office of Federal Contract Compliance Programs. Employers have claimed for years that a team of DOL lawyers and agency officials on the West Coast have operated more aggressively than the agency’s Washington headquarters, and have been out to get big technology companies by bringing extensive anti-discrimination enforcement actions against them.

But workplace inequity isn’t a new phenomenon for Silicon Valley, which is known just as well for its lack of diversity as it is for its flashy technologies. most recently scored a “D” on Arjuna Capital’s 2020 Gender Pay report, and Oracle and both scored an “F.” faces a possible class action alleging gender pay disparities, and Seattle-based has already temporarily fended off similar claims. Former agency officials said the agency was fulfilling its duty by combating workplace inequality and focusing on its mission of affirmative action.

But the Black Lives Matter movement, and the impending election, make it unlikely the company will make this matter go away unless Oracle prevails in the courtroom.

“There’s no way that the court is not aware of this broader societal set of developments,” Silberman said.

Oracle didn’t respond to multiple requests for a comment.

The Labor Department’s OFCCP is unique because, unlike other federal civil rights agencies, it has the authority to access worker pay data from private employers, as long as that employer is a federal contractor. The agency regularly and randomly audits contractors for compliance with federal anti-discrimination laws.

The agency recently initiated an involuntary reassignment of Herold, the top litigator overseeing the Oracle lawsuit and the OFCCP’s enforcement actions on the West Coast.

Filing the Oracle lawsuit on the eve of the Trump administration “was not an easy process,” because of the magnitude of the allegations, a former agency official told Bloomberg Law, speaking on condition of anonymity. But if it hadn’t been filed, “it probably would have been settled for nothing,” or for a much smaller sum, given the company’s political ties, the official said.

Two years later, and halfway through the Trump administration, the agency amended its allegations by buckling down on the extensive pay bias claims and slapping a hefty price tag of $400 million on the lawsuit.

Oracle co-founder and current CEO Safra Catz have aligned themselves with the Trump administration. In February, Ellison hosted a fundraiser for Trump’s reelection campaign, a bold move in left-leaning Silicon Valley that rankled some Oracle employees. The Trump administration spoke with Catz about a potential role within the administration, and she was announced as serving in one of the White House’s Great American Economic Revival Industry Groups.

Lawyers for the OFCCP continued to build the case for several more months after initially suing in January 2017, because at that time, the agency lacked a politically appointed director to hamper their progress, the official said. Ondray Harris, a political appointee, took the agency’s reins in December 2017, after the legal team made significant headway.

The lawyers filed the second amended complaint in January 2019, with the $400 million price tag.

That sum was “way out of the norm” for the kinds of enforcement cases the DOL agency usually had brought, said Matthew Camardella, an attorney with Jackson Lewis. He co-leads the Affirmative Action Compliance and OFCCP Defense Practice Group, and has defended technology companies in enforcement lawsuits, but isn’t involved with the Oracle litigation. Oracle’s revenue for the last quarter of its fiscal 2020 was $10.4 billion. 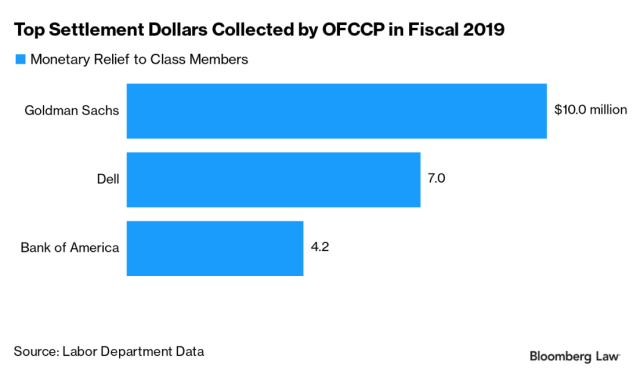 “Those numbers are unheard of,” he said, and represented a “shock and awe campaign to force Oracle to resolve this.”

The Labor Department declined to comment, citing the active litigation.

For years, contractors have claimed the DOL’s Pacific Region, which includes Silicon Valley, operates independently of and more aggressively than the Washington, D.C., headquarters. They believe the region targets technology companies, aiming to bring anti-discrimination enforcement actions against them, and have been frustrated that the practices continue, despite the agency gaining both a Trump-nominated director and a new Solicitor of Labor. The agency’s past attempts to quell those concerns weren’t successful.

“Their theory was that if they tackled the big guys, they wouldn’t be able to stand the press, and they’d write the check,” said John Fox, a former OFCCP official during the Reagan administration, of Patricia Shiu, the OFCCP director during the Obama administration. Fox now defends employers.

But Shiu, the agency director who oversaw the audit of Oracle, said she thinks the agency was focused on its mission of eliminating workplace discrimination.

“I think it’s really interesting because when I was doing my job at OFCCP, most contractors would tell me how important affirmative action was,” Shiu said. “What I don’t think they liked was the fact that they hadn’t really contended with the enforcement regime of the Obama administration.”

A quiet settlement is nearly impossible, given the impending election, the Black Lives Matter protests, and the acrimonious litigation between the two parties, sources told Bloomberg Law.

“It’s hard to walk back a case once you’ve basically got good data and it’s now been publicized,” Shiu said.

Adam Pulver, who formerly worked as a Labor Department attorney during the Obama administration, agreed.

“You can’t just drop your case,” he said. He’s now a lawyer for the consumer advocacy firm Public Citizen.

The litigation has become more hostile, too, possibly another reason the enforcement action persists.

Three female workers sued Oracle in California state court in June 2017, on behalf of more than 4,000 women. A state judge certified that class in April, advancing the lawsuit.

“They’re getting pressed from both sides,” the former DOL official said. “If the private case is going forward, they can’t get rid of the challenge to their practices. They can’t make it go away.”

Shiu said it isn’t a good look for Oracle. The allegations aren’t identical, but to the public, they might as well be.

“No one’s going to parse this stuff,” she said.

Instead of solely defending against the agency’s allegations, Oracle decided to go on the offense. One week before the two parties were set to appear in court for a trial in the DOL case, the company sued the department, alleging that its administrative trial system for workplace discrimination claims violates the Constitution’s separation of powers.

The new lawsuit was a direct assault on the Labor Department, and therefore on Trump, Ellison and Catz’s ally.

It also threatens a civil rights agency’s ability to enforce anti-discrimination laws during the heightened awareness of the Black Lives Matter movement, which has catalyzed conversations about why workplace equal employment opportunity laws exist.

“They play hard, and they play to win,” said former official Fox of Oracle’s litigation tactics. “They don’t care about money the way most companies would.” Since Oracle filed its lawsuit, there’s been a barrage of op-eds in various publications, including the Wall Street Journal, questioning the OFCCP’s authority to bring extensive enforcement actions and specifically mentioning the agency’s case against Oracle.

Fox said Oracle believes the agency’s conclusions are without merit and is intent on “fighting this to a successful conclusion.”

“They are vigorously fighting to vindicate their position,” he said.